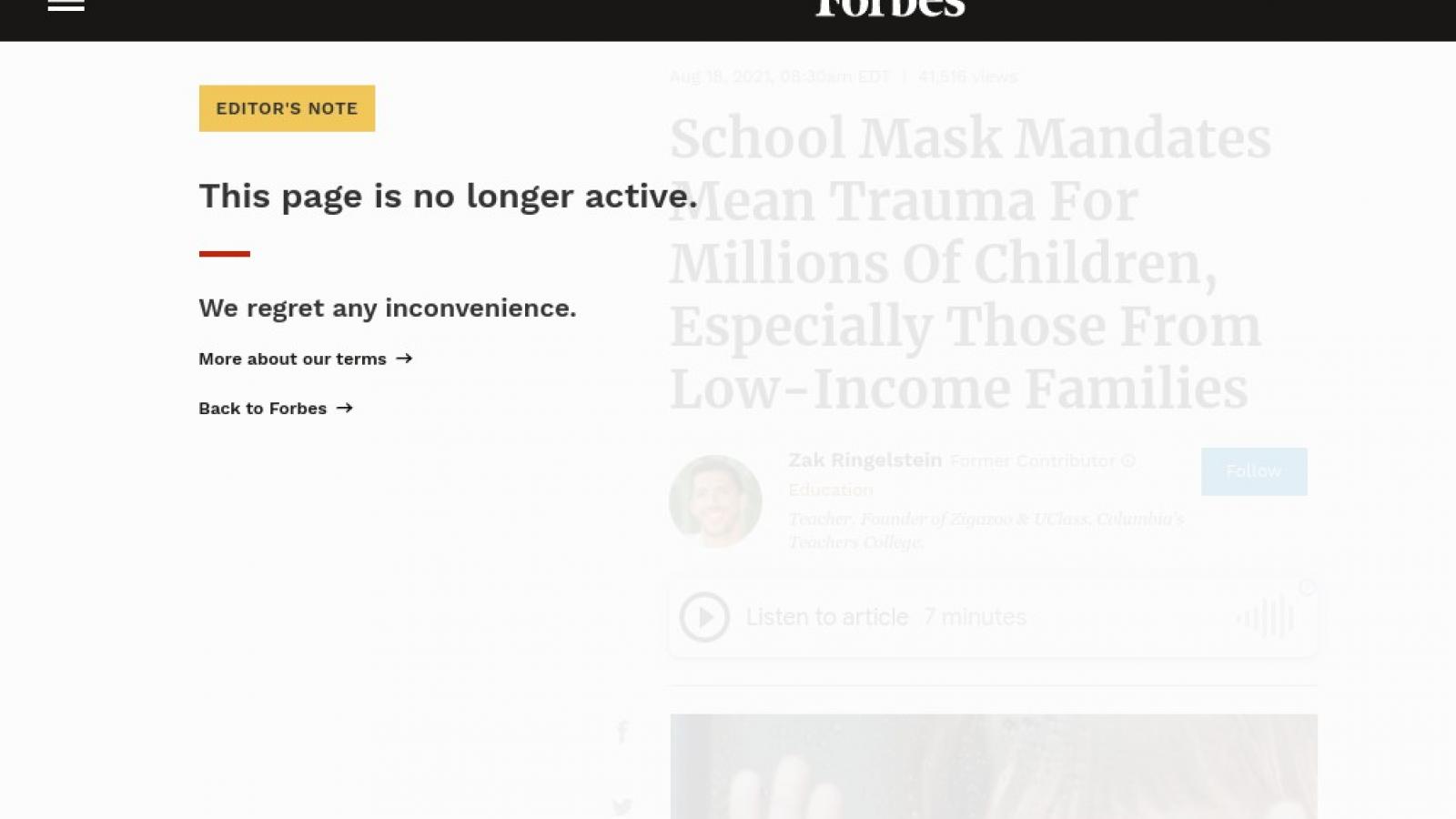 An essay by a former U.S. Senate Democratic nominee that compares children's mask mandates to standardized testing has been hidden on Forbes.com since late Monday, with no explanation.

"Editor's note: This page is no longer active," reads a pop-over message on the whited-out Aug. 18 article, which is titled "School Mask Mandates Mean Trauma For Millions Of Children, Especially Those From Low-Income Families."

The pop-over links to Forbes.com's terms, which have not been updated in nearly six years. They give the publisher, led by free-market evangelist and two-time Republican presidential candidate Steve Forbes, the unilateral right to remove content that is "false" or "misleading."

The author page for Zak Ringelstein, nominated by the Maine Democratic Party in 2018 to challenge independent incumbent Angus King, also changed him to a "former contributor" sometime since early Friday.

Archived versions confirm the Aug. 18 essay is the only one missing from his page — and the only one that says masks have documented harms to children.

"Do the benefits of masks and social distancing truly outweigh long-term psychological, physical, social, and academic harm to a whole generation of American schoolchildren?" the summary excerpt reads. "If we care about equity and the most vulnerable members of our society, we at least can't be afraid to ask."

All but one of the remaining essays, which go back to April 2018, focus on public education. Ringelstein's LinkedIn page says he's pursuing a doctorate at Columbia University's Teachers College, which also graduated Obama administration Secretary of Education John King.

The unexplained disappearance is all the more remarkable because Forbes put Ringelstein on its 30 Under 30 list for education leaders in 2015. He founded an educational technology company and participated in a White House roundtable on the subject in 2013.

And when he ran for senator three years ago, Forbes wrote a glowing profile of Ringelstein that highlighted his endorsement by the Democratic Socialists of America and arrest on the Texas border for protesting President Trump's immigration policy.

One clue might lie in a column by Randall Lane — Forbes chief content officer, editor of the print magazine and creator of the 30 Under 30 list — shortly after the U.S. Capitol riot January 6.

He threatened to brand subjects of Forbes coverage as liars if they hired any of President Trump's spokespeople, raising the question of how Forbes would treat contributing writers who stray from its orthodoxy.

Forbes has not answered Just the News queries to explain why the article is gone and why Ringelstein is no longer contributing. Neither Ringelstein nor his latest edtech startup Zigazoo, dubbed Tik Tok for kids, has answered queries, and it's not clear whether he shared the essay on Twitter before it disappeared, as he did with previous essays.

It's not a good time for Forbes to be in the spotlight for possibly deplatforming a contributing writer for wrongthink. Last week, the media company announced it's planning to go public through a "definitive business combination agreement" with Magnum Opus.

The dire consequences of publicly questioning masking policies continue for social media users. Twitter suspended a pseudonymous Illinois critic Wednesday for blaming public health messaging on the protective power of masks for the death of an unvaccinated single mother.

A similar sentiment from Harvard Medical School professor Martin Kulldorff, a pioneer in vaccine safety, led Twitter to suspend him for a month late this spring. LinkedIn then removed two of his posts on vaccine mandates last month.

'Far more repressive than standardized testing ever was'

Ringelstein's writing suggests he was a fairly conventional advocate for public schools until the COVID-19 pandemic, which led him to warn that they were facing an existential crisis.

Last fall he said the novel coronavirus was a boon to then-Education Secretary Betsy DeVos and her "opt-out movement" against public education. Even if pandemic mitigation measures "make sense from a public health perspective," Ringelstein warned, forcing children to attend school online or through masks and plexiglass on campus are "low-grade options."

Other essays argued against live daylong video sessions and Zoom learning by default, but it was only last month — 10 months after his DeVos essay — that Ringelstein apparently struck a chord with his warnings about the holistic harm to children from in-school masking.

With recent legislative victories against standardized testing, "[t]he future looked bright for a free, student-centered, constructivist education for all children," he wrote. 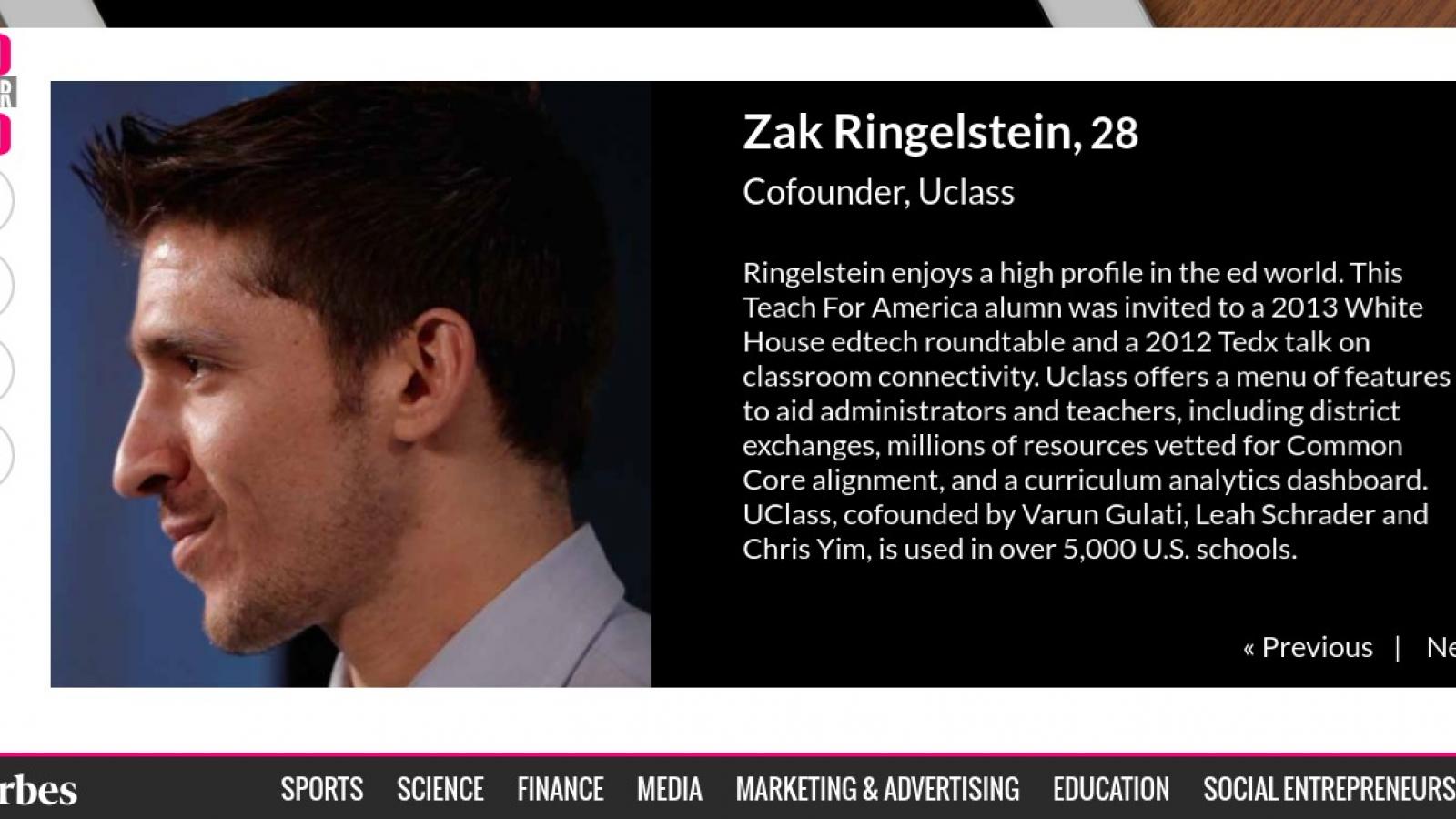 "It seemed that finally it wouldn't just be rich families who could afford to opt out of restrictive test-based academic settings. That was until Covid-19 reached America's shores and overnight transformed the American public education system into something unrecognizable: a system of restrictions and mandates far more repressive than standardized testing ever was."

He rebuked a common refrain from defenders of mask mandates: "Kids are resilient." Ringelstein cited research from the American Psychiatric Association on the trauma resulting from "ongoing, persistent stress or fear," and applied it to masks and distancing.

Such mitigation "not only signals that they are a threat to others and/or that others are a threat to them, but also takes away the most basic way children calm their nervous system," he said. "Neurological research demonstrates that kids who experience this kind of fear and trauma at a young age undergo structural and functional restructuring of their brain's prefrontal cortex, resulting in emotional and cognitive processing problems."

It's not clear whether the essay drew much attention before Thursday night, when it was shared by an anti-mask activist on Twitter. It was picked up hours later by University of California San Francisco epidemiologist Vinay Prasad, a vocal critic of the paucity of research on COVID interventions.

The next day the Great Barrington Declaration, which opposes one-size-fits-all COVID mandates and was cowritten by Harvard Med's Kulldorff, promoted Ringelstein's essay on its Twitter profile.

By Tuesday night, the anti-mask activist was flogging Forbes for allegedly removing the essay and demanding an explanation from Editor-in-Chief Steve Forbes: "Is slapping a mask on a child really that political, when this is not common practice in much of the world?"