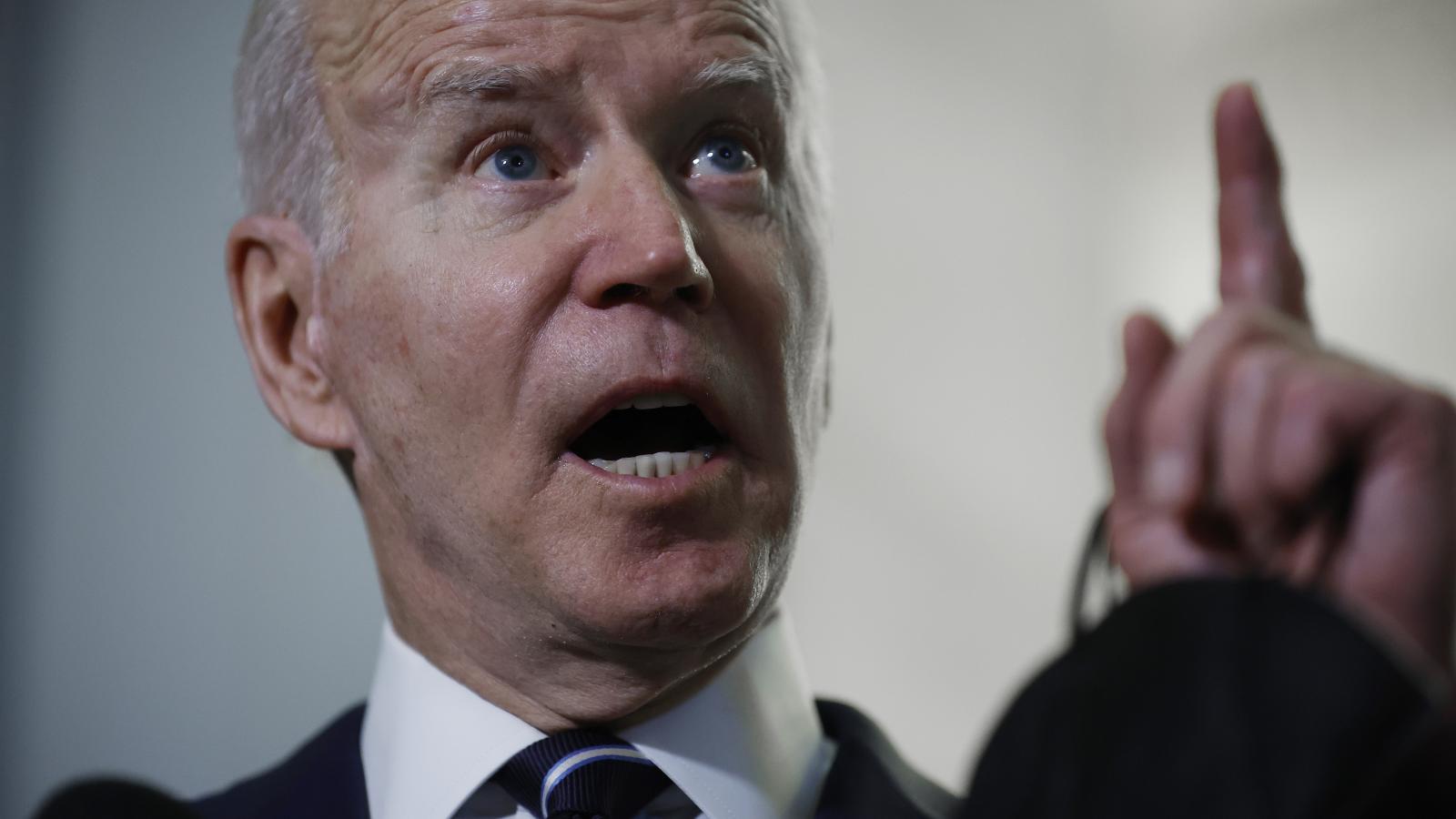 President Biden and some of his most prominent supporters are increasingly invoking the specter of what they claim is an existential threat to democracy posed by their political opponents to justify a host of ambitious policies that could change the constitutional system.

In the process, Biden and his allies have portrayed those who oppose the Democrats' agenda as dangers to American democracy, using inflammatory rhetoric and contemplating forms of surveillance and political controls that echo past examples of the federal government violating civil liberties in the name of defending the country.

On Tuesday, Biden invoked "the threat to our democracy" in a speech advocating the Democrats' proposed election law reforms.

"I believe that the threat to our democracy is so grave that we must find a way to pass these voting rights bills," Biden said in Atlanta. "Debate them, vote, let the majority prevail. And if that bare minimum is blocked, we have no option but to change the Senate rules, including getting rid of the filibuster for this."

The filibuster effectively requires 60 votes, rather than a simple majority of 51, to pass legislation in the Senate. Many Democrats, including Biden, have expressed support for eliminating the filibuster in order to pass more of their agenda while they control both chambers of Congress and the White House.

In 2005, when Republicans considered suspending the filibuster for judicial nominations, Biden called it "a power grab" that "would eviscerate the Senate."

On Tuesday, however, Biden said the procedure has been "weaponized" to divide the Senate rather than generate compromise, framing the issue as one that will determine the future of democracy.

"Today I'm making it clear," said Biden. "To protect our democracy, I support changing the Senate rules, whichever way they need to be changed, to prevent a minority of senators from blocking action on voting rights."

The Constitution primarily gives state legislatures, not the federal government, the power to create and enforce their own election procedures.

Biden said he stands against "the forces in America that value power over principle," adding that former President Trump "and his supporters" want "to suppress your vote, to subvert our elections."

Biden singled out Georgia Republicans, who have pushed a series of voting law reforms following the 2020 elections. "To them, too many people voting in a democracy is a problem," said Biden. "So, they're putting up obstacles."

Republican efforts to combat voter fraud are effectively "Jim Crow 2.0," according to Biden, who said "[Trump's] allies" seek "to disenfranchise anyone who votes against them."

"Let's be clear: We must pass the voting rights bills that are now before the Senate, and the American people must also do something more," she said. "We cannot sit on the sidelines. We must unite in defense of our democracy."

Other Biden allies, including House Speaker Nancy Pelosi (D-Calif.) and Senate Majority Leader Chuck Schumer (D-N.Y.), have similarly characterized the voting rights laws as necessary to defend democracy from those who seek to subvert it. Schumer also pledged to push to change Senate rules by Monday in order to pass the legislation.

Beyond election reform and the filibuster, Democrats have also framed other priorities as battles over the future for democracy.

Sen. Ed Markey (D-Mass.), for example, has argued that expanding the number of justices on the Supreme Court "will restore the court's balance and public standing and begin to repair the damage done to our judiciary and democracy." Markey added that the Senate should abolish the filibuster to make it happen.

Brian Fallon, the executive director of the liberal group Demand Justice who served as national press secretary for Hillary Clinton's 2016 presidential campaign, also described an expanded Supreme Court as the "only way to restore balance to the Court and protect our democracy."

Some top Democrats, including Biden and Pelosi, have been hesitant to back such a proposal. The White House last year established a commission to examine potential reforms to the high court, including increasing the number of justices.

Much of the left's current rhetoric about saving democracy began during Trump's presidency and reached a fever pitch in the wake of the Jan. 6 Capitol riot.

Since then, Democrats have launched a campaign to label and disqualify Republicans who supported efforts to challenge the 2020 presidential election as insurrectionists who tried to overrun American democracy.

Marc Elias, the Democrats' top election lawyer, has been leading this effort, pushing to use a Reconstruction-era provision of the 14th Amendment designed to disqualify from post-war office Confederate political and military leaders who "engaged in insurrection or rebellion" against or provided "aid or comfort to the enemies" of the United States.

"I'm fairly confident from what little we've heard from the FBI that they have reallocated resources and repositioned some of their counterterrorism focus to increase their focus on right-wing extremism and domestic violent extremists," McCabe said last week during a panel by the University of Chicago's Institute of Politics. "And I think that's obviously a good idea."

However, he continued, the FBI and other government agencies need to cast a wider net.

"Are you going to catch this threat if your focus is only on the traditional, right-wing extremist, those groups that we know about, the quote-unquote, fringes of the right-wing movement?" McCabe asked. "And I think the answer to that is no.

"It's entirely possible that when the intelligence community and the law enforcement community look out across this mainstream," McCabe added, "they didn't assume [on Jan. 6] that group of people — business owners, white people from the suburbs, educated, employed — presented a threat of violence, and now we know very clearly that they do."

Framing a political group as a threat to America's democratic system has ample precedent in U.S. history. After World War I, the Justice Department conducted the so-called Palmer Raids to capture and arrest suspected anarchists and communists. Some three decades later, in the early years of the Cold War, then-Sen. Joseph McCarthy launched a campaign against alleged communists across society.

Both the Palmer Raids and McCarthyism resulted in violations of Americans' civil liberties.

Since Jan. 6 of last year, several individuals arrested for their alleged involvement in the Capitol riot have claimed the FBI, Justice Department, and federal prison officials under the Biden administration have violated their civil and constitutional rights. In total, more than 700 people have been imprisoned for Jan. 6-related crimes without a trial.

On Tuesday, Biden described the Capitol riot as a day "when a dagger was literally held at the throat of American democracy," before focusing on the importance of the Democrats' election reforms.

"When these bills come to a vote will mark a turning point in this nation's history," Biden said. "We will choose. The issue is, will we choose democracy over autocracy. Light over shadows. Justice over injustice. I know where I stand. I will not yield. I will not flinch. I will defend the right to vote, our democracy against all enemies — foreign and, yes, domestic."