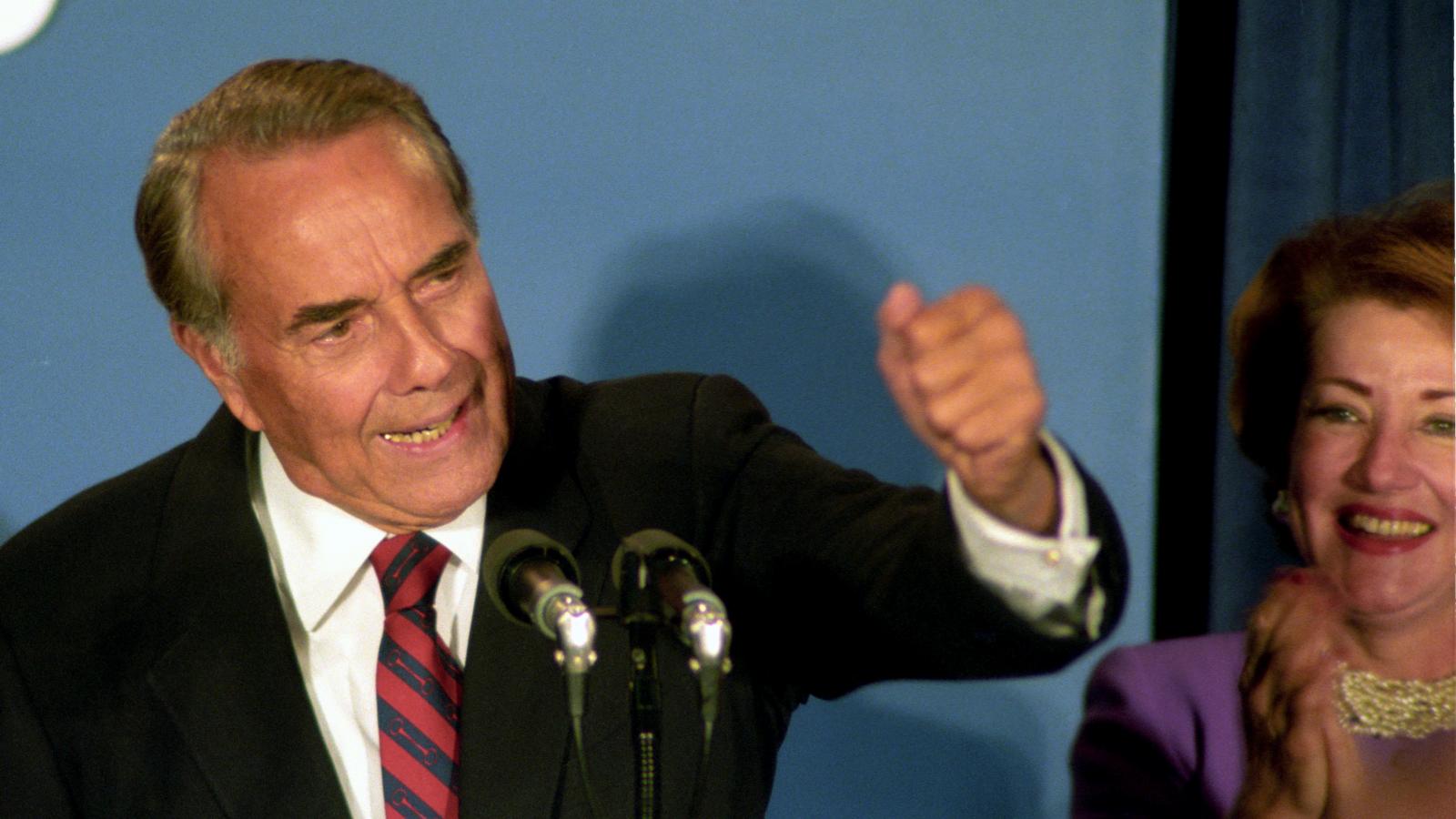 Bob Dole during his 1996 run for president.
Ron Sachs/CNP/Getty Images)
By Bethany Blankley

On Thursday, one of the greatest statesmen to have served in Congress will lie in state in the U.S. Capitol, my first boss on Capitol Hill, Senator Bob Dole.

I first met him at a campaign event in Maryland for a friend of his who was running for Congress in 1994.

We spoke about my grandfathers, who were part of the "Greatest Generation" like he was, and about my one grandfather who served in the Italian campaign in World War II like he had.

When we first met, he joked about not being able to shake my hand with his right hand, which was gripping a black pen, because his arm had nearly been blown off. That conversation turned into intern opportunities for me in his Senate office and, later, in the Senate Majority Leader's Office and on his 1996 presidential campaign.

Initially, I was the only intern in his office not from Kansas. Staffers would joke that I "wasn't in Kansas anymore," referring to Dorothy in the Wizard of Oz, to which I replied that I'd never even been there.

But you didn't need to be from Kansas to appreciate perhaps his most important character traits: humility and perseverance. And a sheer determination to go about his daily life despite enduring constant pain. All three left a remarkable impression. He never gave up, no matter the circumstance.

One of my first tasks as an intern was bringing him ice. I quickly learned it wasn't ice in a cup for a drink, but ice in a bag for his shoulder or his arm because he was in pain. Sen. Dole needed help dressing, putting on his jacket, and performing daily activities that many of us take for granted. I never saw him express bitterness or resentment for it.

He just kept pushing ahead, sometimes with a smile on his face and a twinkle in his eye.

Most elected officials might only venture to run on a presidential ticket once. The campaign season is grueling. The constant barrage of criticism and media bias is relentless. The long hours on the road are exhausting. It was frustrating to watch how he was criticized in the media for being too old or cranky when the senator I knew was humorous and kind.

After losing his last presidential campaign, he later remarked how people would often tell him they'd have voted for him in 1996, if he'd had been as personable and funny on his campaign as he was in real life.

Many were astonished by how funny he was on a late-night show with comedian David Letterman or in a parody of himself on "Saturday Night Live," after the campaign was over.

Unlike some elected officials in Washington, D.C. today who often hurl insults at each other, Dole was a true statesman who was genuinely friends with many of his Democratic colleagues. Even though some Democrats labeled him "the hatchet man" during his 36 years on Capitol Hill, his shrewdness and pragmatism enabled him to broker deals and get bills passed across party lines that might otherwise have gone nowhere.

There was once a time on Capitol Hill when elected officials and staffers on both sides of the aisle got along, sharing a common purpose of public service. They even played in a baseball league on the National Mall or went out for a pint at a local pub — without throwing any punches.

Perhaps Dole's humility and perseverance were forged early on growing up in Dust Bowl Kansas during the Great Depression. His family was so poor they lived in the basement of their house and rented the rest out. Yet, they made do and didn't give up.

Perhaps it came from surviving enemy fire from a German machine gun that ripped through his spine and right arm, shattering two vertebrae and paralyzing his arms and legs. Perhaps it came from remembering the community who helped him survive three years of multiple surgeries to save his arm — made possible by $1,800 worth of donations, mostly in quarters, to the "Bob Dole Fund."

Perhaps it was from having to relearn how to walk and bathe and write with his partially- numb left hand, knowing he'd never be able to use his right hand. Yet he didn't give up, and went on to graduate college and law school, in pain and partially disabled.

Dole never defined himself by what he wasn't: a Kansas University basketball player who couldn't play ball anymore or an aspiring doctor who'd never be able to perform surgery. He defined himself by what was — a survivor, one who would win election to the House, then the Senate, and eventually go on to become the longest-serving Republican Senate Majority Leader until Sen. Mitch McConnell (R-Ky.) broke his record.

Sen. Dole was loved by Kansans for loving the common man. He cared about the farmer, the disabled and veterans.

He was one of the driving forces behind finally getting the World War II Memorial built on the National Mall — where he was fittingly honored this week. Even in his 90s, he was regularly seen on Saturdays greeting veterans there.

In a 2014 NewsHour interview, Dole said he didn't know what his legacy would be, but he knew "that I have never forgotten where I was from."