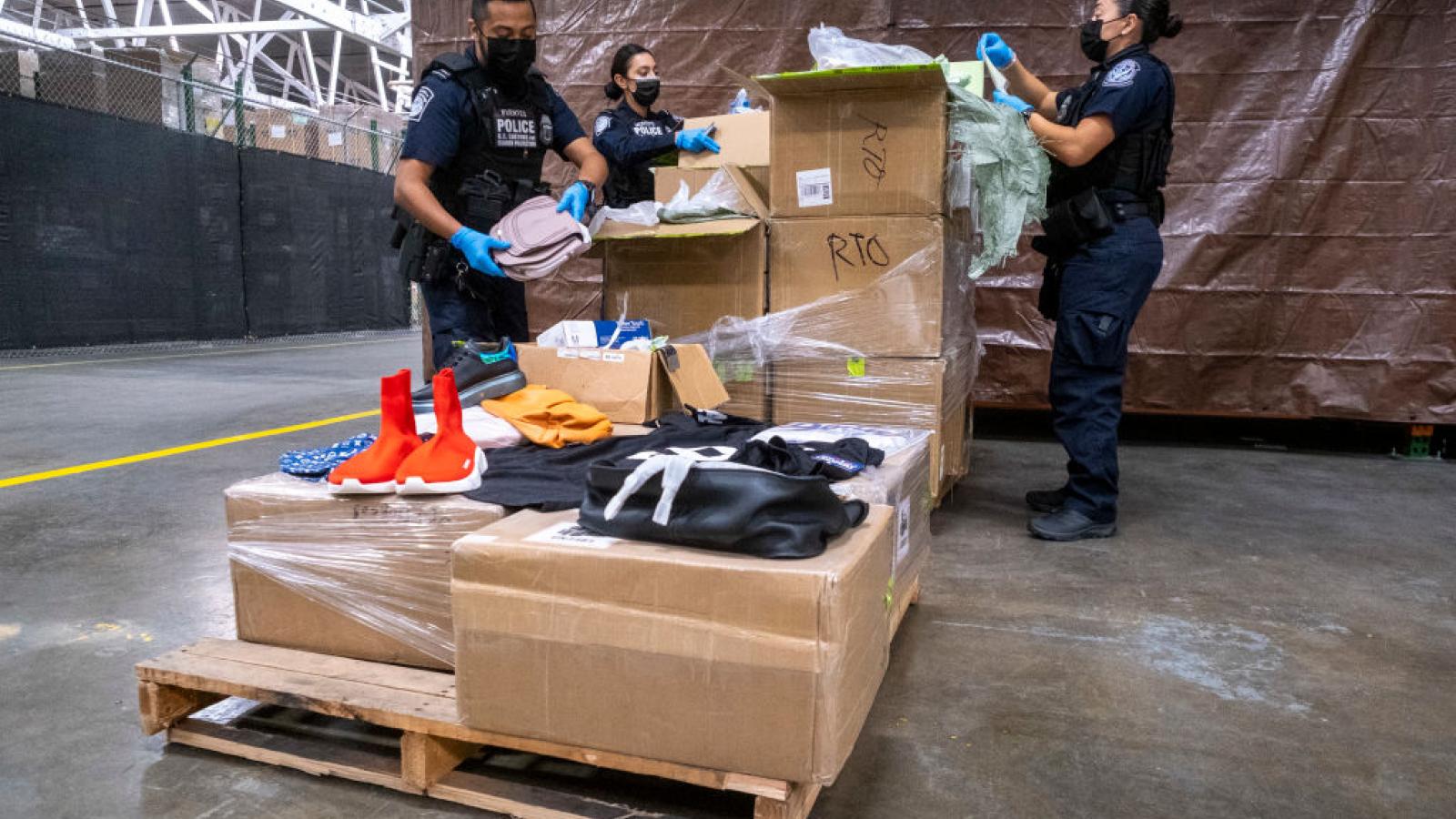 While much attention has been focused on illegal immigrants, traffickers and criminals being apprehended at the southern border, Customs and Border Patrol agents are diligently working at ports of entry nationwide to thwart illegal trade activity.

Recent seizures have prevented millions of dollars of counterfeit merchandise flooding into the country ahead of the holidays, in addition to items that could seriously harm Americans, like fake contact lenses and unsafe solar panels.

"Counterfeit goods are a problem all year long, but the increased demand for gifts, household products, virtual learning tools, and even health products means that the holiday season is an especially busy time for crooks who are looking to make a profit by selling knock off goods to unsuspecting consumers," CBP warns in a recent public service announcement.

"Fake goods pose real dangers to your health and safety and jeopardize the U.S. economy," said AnnMarie Highsmith, executive assistant commissioner of CBP's Office of Trade. "Every year, CBP seizes a variety of counterfeit goods worth billions of dollars."

At one port of entry in California, for example, in one day, CBP agents seized roughly $30 million worth of fraudulent designer merchandise arriving in containerized cargo shipment from China.

In Cincinnati, they confiscated nearly $500,000 worth of counterfeit contact lenses arriving from Hong Kong and Japan.

In Baltimore, agents seized over $250,000 worth of potentially dangerous solar panels from China.

Items seized in California included a variety of handbags, backpacks, and clothes with the logos of high-end designer brand names of Gucci, Chanel, Fendi, YSL and Louis Vuitton. If they were genuine, CBP agents estimate, their combined manufacturer's suggested retail price (MSRP) would be around $30,437,775.

"Bad actors exploit e-commerce operations by selling counterfeit and unsafe goods through online platforms, particularly during the holiday season when shoppers are looking for deals," said Donald R. Kusser, port director of the Los Angeles/Long Beach Seaport, where the items were confiscated.

"If the price of the product seems too good to be true, it probably is," he warns consumers. "Counterfeit goods are often of poor quality and can even be unsafe for you and your family."

In Cincinnati, CBP agents, partnering with Food and Drug Administration agents, seized 26,477 pairs of undeclared, or misdeclared, decorative contact lenses. If they had been legally imported, they'd be worth an estimated MSRP of $479,082.

"Counterfeit products, such as these contact lenses, can contain toxic substances that can impact the public's eyesight," LaFonda Sutton-Burke, director, Field Office-Chicago, said. "Counterfeiters have no moral compass and will counterfeit just about anything to make a buck. We have encountered counterfeit makeup, perfumes, toys, clothing, electronics, machinery parts, basically, anything in demand we've seen it. The movement of these goods into online marketplaces pose a significant risk to the American consumer."

All contact lenses are medical devices that require a valid prescription from a licensed optometrist and are not legally sold over the counter. If consumers suspect a vendor is illegally selling contacts or other medical products, they are encouraged to report them to the FDA.

In Baltimore, CBP officers detained a shipment of 365-watt crystalline silicon photovoltaic solar panel modules from China. After inspection, they learned the panels had fraudulent certification markings applied to them and hadn't been lab certified, meaning they were potentially unsafe for use.

The panels were destined to an address in Denver, appraised with a $275,000 MSRP, if authentic.

They also have meaningless warranties and disqualify consumers and businesses from receiving solar power rebates and incentives.

"The fact that these solar panels displayed a counterfeit safety certification marking presented a very real and a very serious concern to the health and safety of American consumers, and so it was a great interception by our dedicated Customs and Border Protection officers," said acting Area Port Director for the Port of Baltimore  Marc Calixte.

"That's $2.5 billion dollars in legitimate revenue that has been taken from the pockets of law-abiding American businesses to line the pockets of criminals and criminal organizations," she says.

CBP has published a consumer awareness guideline about the dangers of counterfeit products. It's also encouraging consumers to report any suspected fraudulent or illegal trade activity through its online reporting system, or to call 1-800-BE-ALERT.