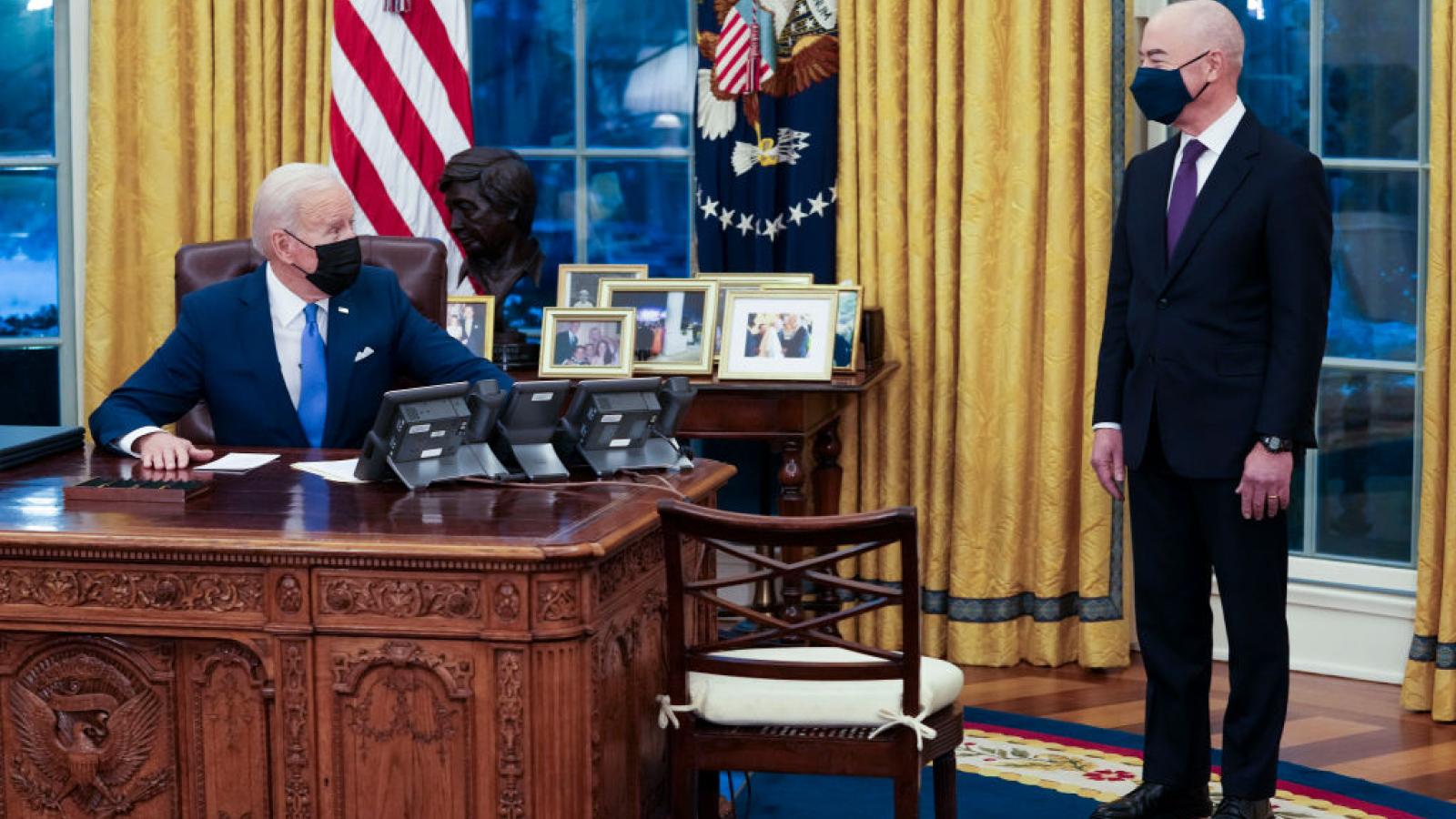 At a Senate Judiciary Committee hearing Tuesday on illegal immigration, South Carolina Republican Sen. Lindsey Graham asked Department of Homeland Security Secretary Alejandro Mayorkas to grade himself on his job performance after the U.S. saw record numbers of illegal aliens entering the country on his watch.

"I'm a tough grader on myself," Mayorkas said. "And I give myself an 'A' for effort, investment in mission, and support of our workforce."

Since Mayorkas took office, more than 1.7 million people have been encountered by Border Patrol agents, and an untold number, estimated to be in the hundreds of thousands, have evaded capture. Border Patrol agents and law enforcement are continuing to apprehend repeat offenders, and in October Customs and Border Protection, a part of DHS, reported a 129% increase in encounters from the previous fiscal year.

Meanwhile, Border Patrol agents came under fire from media misinterpreting horse patrol techniques as violent crowd control, and Mayorkas' policy changes have made it harder for them to do their jobs. Morale is extremely low within the largest law enforcement agency in the country, with a large number of agents reportedly planning on retiring by the end of the year if the situation doesn't improve.

Still, Mayorkas testified that the Biden administration is "on the right track" addressing illegal immigration, to make up for what he said were "cruel" policies of the Trump administration.

In a response to Mayorkas' testimony, the two, along with another Heritage Foundation colleague, pointed out that he couldn't answer the questions he was asked, including the numbers of COVID-positive illegal aliens and those with criminal convictions released into the U.S. by ICE officials or the number of minors currently held in Border Patrol facilities — or even speak to their condition.

"To be clear, the Department of Homeland Security produces daily metrics containing this information," Wolf and Morgan point out. "The more appropriate question is: Why didn't the secretary come prepared with such data?"

When asked by Texas Republican Sen. Ted Cruz about the number of unaccompanied minors currently being held in DHS facilities — or "Biden border cages," as Cruz called them — Mayorkas replied that he wasn't familiar with the term "cages."

"Respectfully, I'm not familiar with the term cages and to what you're referring," Mayorkas replied.

Mayorkas replied, "I will have to circle back with you with the precise number."

"Children sleeping on floors, crashed in upon each other," Cruz responded. "When I took this photograph, the rate of COVID positivity was over 10 percent."

Wolf and Morgan argue Mayorkas' answer implies that he wasn't telling the truth, since his testimony conflicts with previous testimony he provided during his confirmation hearing when he repeatedly acknowledged the term "cages." Likewise, the construction of the facilities being used — including cages — began under President Barack Obama while Mayorkas worked at DHS, they note.

When pressed on why Mayorkas didn't defend Border Patrol agents on horseback who were criticized for "whipping" Haitians when using horse reigns, Mayorkas said he "stands with the men and women of the department" and "will not prejudge the facts."

But this claim conflicts with what he said shortly after the incident occurred Sept. 19, when he said he was "horrified" by what he saw.

"One cannot weaponize a horse to aggressively attack a child," he said. "That is unacceptable. That is not what our policies and our training require. ... Let me be quite clear: That is not acceptable."

Mayorkas said then that an investigation would be conducted within days. But one month later, two agents at the center of the investigation hadn't even been interviewed, National Border Patrol Council President Brandon Judd said.

On the same day as Mayorkas' testimony this week, DHS released a statement on the investigation, saying that CBP had initially referred the investigation to DHS' Office of Inspector General, which declined to investigate. Then, it referred the matter back to CBP's Office of Professional Responsibility, which began an investigation reviewing videos and photographs, and interviewing witnesses, employees, and CBP leadership.

The findings of the investigation still haven't been released, and DHS says it will be up to CBP management to determine whether disciplinary action is appropriate.

Mayorkas' "lack of leadership and refusing to support the department's law enforcement officers is taking a toll," Wolf and Morgan argue.

"Americans deserve clarity and direct answers on this border crisis," Wolf and Morgan said. "Unfortunately, this administration deserves not an 'A,' but an 'F' on that score."