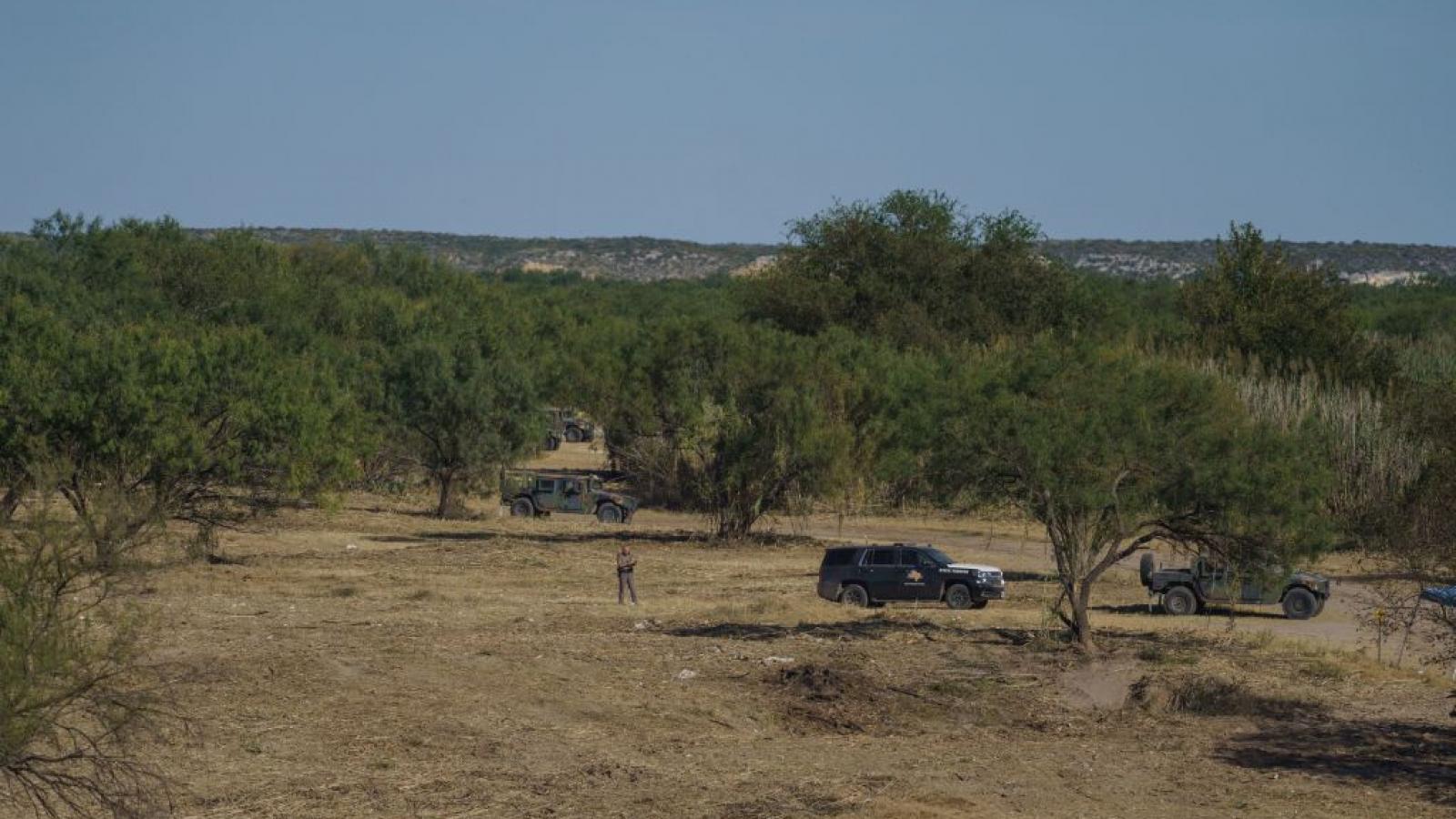 Texas State Trooper at border site where only days before about 15,000 illegal Haitian immigrants had been encamped.
(Paul Ratje/Getty Images)
By Bethany Blankley

Many of the Haitians illegally entering the U.S. purportedly fleeing violence, poverty, and persecution have been living in Brazil and Chile and Mexico, working and prospering since at least 2010, several reports indicate.

Posting  a picture of non-Haitian IDs and passports littered on the ground at the border, Texas Republican Rep. Chip Roy tweeted: "The Haitians in question — dropping their Chilean, Brazil, & other identification at the border. This is systematic, planned, and purposeful. Meaning, they are largely not fleeing assassination, earthquakes, and the like. We are being played."

Roy has repeatedly demanded that DHS Secretary Alejandro Mayorkas be impeached for dereliction of duty for failing to secure the border.

The small border town of Del Rio, Texas, was overwhelmed recently by roughly 15,000 Haitians attracted by reports of an open border policy under the Biden administration. Learning of a particular crossing where they wouldn't have to pay a cartel fee, their journey was made easier through the use of social media platforms and apps.

One Haitian traveling from Chile told The Associated Press how he followed detailed instructions sent to him via WhatsApp from his brother, who is currently living in New Jersey and had already entered the U.S. illegally through Texas. His brother told him he would need roughly 20,000 pesos ($1,000) for buses taking him from Chile through Mexico.

Another Haitian described to the Center for Immigration Studies (CIS) how the Mexican government had given a three-day window to travel north without fear of reprisals.

Mayorkas said last week that he was "very concerned that Haitians who are taking the irregular migration path are receiving misinformation that the border is open" or that they qualify for protected status to stay in the U.S. after entering illegally. "I want to make sure it is known that this is not the way to come to the United States," he said.

But retired Border Patrol agent and U.S. Army veteran Frank Lopez Jr., told Just The News that prior to the Biden administration's relaxation of border enforcement policies, the Haitians would never have come in en masse via the Del Rio sector, where he worked for 30 years.

In 2005, the Del Rio Sector initiated a  border enforcement process called Operation Streamline, which was so effective that other sectors replicated it, Lopez recounted. Through Streamline, the vast majority of people apprehended in Del Rio were prosecuted for deportation and detained for up to six months prior to their hearing. Being detained for up to six months served as a deterrent preventing people from coming, he says.

"They communicate like lightning," Lopez said, referring to the underground network in other countries. "When the word [of stricter enforcement] got out, and it did, we saw less people coming. The message was, 'Don't come here or you'll be arrested.'"

But under Biden, very few Haitians have been detained or prosecuted. On Friday, Mayorkas told reporters, only roughly 2,000 of the more than 30,000 migrants who came through Del Rio cumulatively, had been deported.

Prior to entering Texas, migrants dumped their IDs, Lopez added, "because they want to show they immediately arrived. They don't want to have a traceable history. If it's provable that they've been working and living in another country and aren't facing an emergency, they can't claim asylum, or their claim would be rejected, and deportation processing would begin."

Another reason they dumped them, he says, is because "they could have used a false identity in Chile or Brazil to get their IDs to begin with, and want to erase their false identity or work history or any question about the legitimacy about their asylum claim."

Many Haitians began arriving in Brazil after Haiti's 2010 earthquake. By 2012, Brazil's National Immigration Council had made it easier for Haitians to obtain visas through the Brazilian Embassy in Port-au-Prince. Over time, previous visa quotas were eliminated and expirations for stays were extended, allowing more Haitians to live and work in Brazil. By 2016, 80,000 Haitians had received amnesty in Brazil enabling them to obtain permanent resident  status.

La Nacion also reported that by 2016, Haitians found they could travel more easily to Mexico if they falsified their documents stating they were from an African country, primarily from the Democratic Republic of Congo. In Mexico, travelers were granted safe passage permits as Africans, whereas if they disclosed their Haitian nationality, they faced greater risk of deportation from Mexico.

Likewise, those living in Chile, CIS notes, "enjoyed years of peace and relative prosperity in Chile, which boasts South America's strongest economy and a government generous with residency and work authorization for Haitians."

DHS is following "the law as Congress has passed it," and "it is our intention to remove" those who don't show up for their immigration hearings, Mayorkas told Fox News Sunday. "We have enforcement guidelines in place that provide that individuals who are recent border crossers who do not show up for their hearings are enforcement priorities, and will be removed."

But according to a CIS analysis, 43% of all illegal immigrants who are released into the U.S. pending trial failed to appear for court in 2017 — and that was before Biden administration policies. Overall, since 1996, 37 % disappeared from court before their trial, CIS notes.

"The truth is the majority of them don't even show up for their hearing," Morgan said. "They get here, their court date is two, three and a half years down the road, and they simply don't show up, and they get court orders removal and abstention from a judge. And they refuse to comply. That's the truth. ... Secretary Mayorkas knows this and is lying to the American people about it."

"If we don't detain them, we know they don't stay in contact," he added. "They don't tell us their address, they move several times, and you don't know where they're at, which is what makes interior enforcement so difficult."

"That's why we say they've created a sanctuary country, because they basically abolish ICE without congressional authority. They've reduced 90% of ICE enforcement in the interior, meaning you basically have to be a known or suspected terrorist or convicted of an aggravated felony [to be searched for to be deported]. If not, you're not a priority. And you're allowed to continue to remain in this country illegally. It's absolutely absurd. And they keep lying to the American people about it."