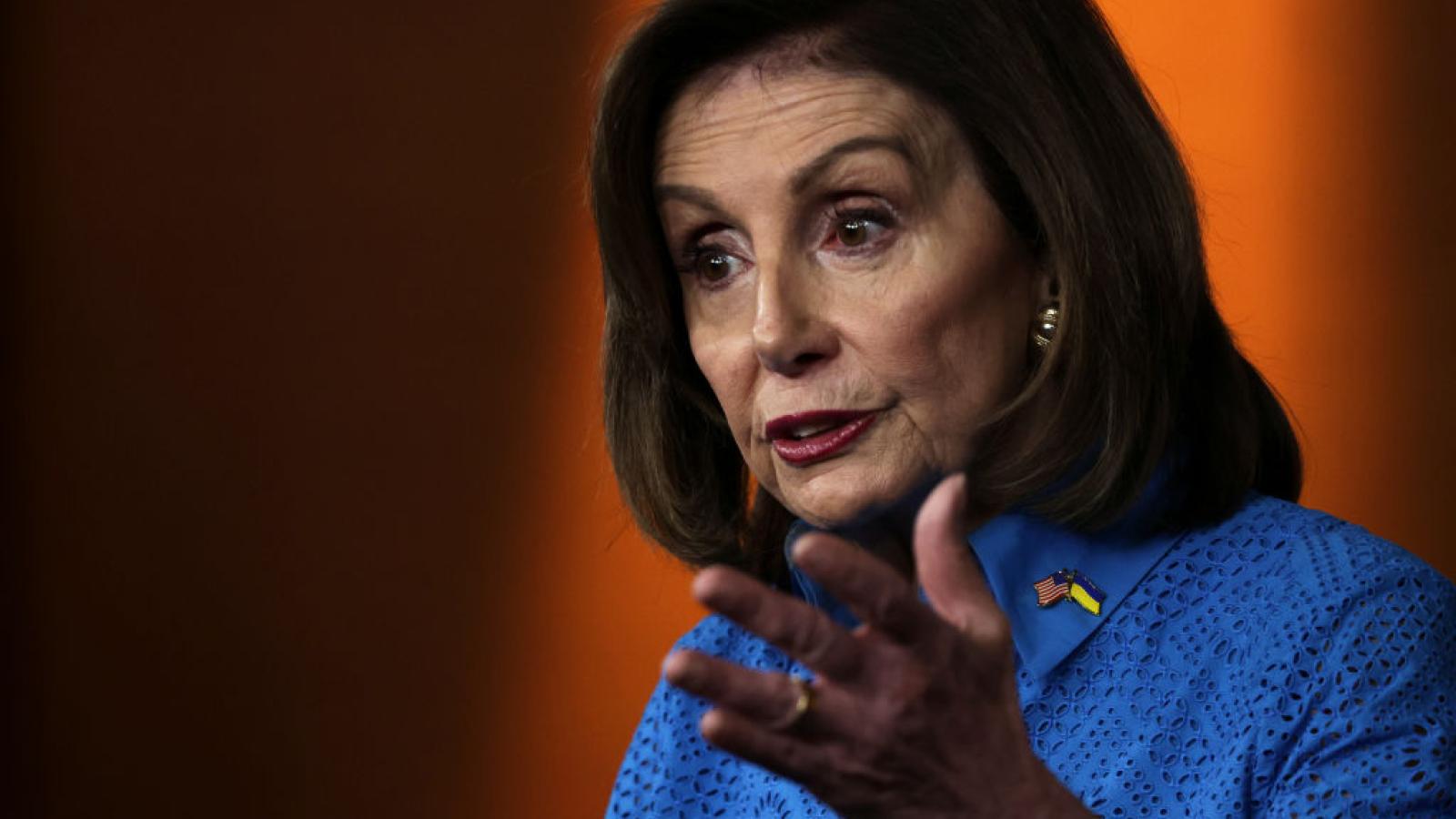 As President Biden prepares for an expected high-stakes call with Chinese leader Xi Jinping on Thursday, his administration is working behind the scenes to warn of the potential risks of House Speaker Nancy Pelosi (D-Calif.) traveling to Taiwan next month.

With lawmakers from both parties backing Pelosi's planned trip and the administration reportedly hesitant about it, the scene could be set for a clash between the executive and legislative branches over Pelosi potentially becoming the highest-ranking U.S. lawmaker to visit the island nation of Taiwan in 25 years.

In recent days, it's been widely reported that Pelosi is planning to go to Taiwan in early August, although the trip remains up in the air as her office refuses to confirm whether it will happen and has yet to announce any travel plans.

"We cannot confirm or deny international travel in advance due to long-standing security protocols," Pelosi's office told Just the News.

However, a spokesperson for Rep. Michael McCaul (R-Texas), ranking member of the House Foreign Affairs Committee, seemed to confirm the trip to Taiwan is being planned.

"Rep. McCaul was invited on the trip, but is unable to attend due to a prior commitment," the spokesperson told Just the News.

The potential Taiwan trip will be overhang Thursday's expected call between Biden and Xi, which White House National Security Council spokesperson John Kirby told reporters on Tuesday would have a "robust agenda" and focus on managing economic competition between the two countries.

Pelosi's "planned travel to Taiwan is not occurring in a vacuum," said Craig Singleton, senior fellow in the Foundation for Defense of Democracies' China Program. "A diplomatic incident surrounding the speaker's trip could potentially derail the White House's efforts to arrange a face-to-face meeting between Biden and Xi, perhaps as early as this October's G20 gathering in Bali, Indonesia."

Singleton also noted Pelosi's trip, should it happen, would overlap with the 75th anniversary of the founding of the Chinese People's Liberation Army (PLA).

U.S. officials have recently been sounding the alarm on the threat posed by the Chinese military, warning Beijing is growing increasingly belligerent.

The U.S. has recently "witnessed a sharp increase in unsafe and unprofessional behaviors by [Chinese] ships and aircraft," Assistant Secretary of Defense for Indo-Pacific Security Affairs Ely Ratner said on Tuesday.

"Over the last five years, the number of unsafe PLA intercepts, including U.S. allies and partners operating lawfully in international airspace in the South China Sea, has increased dramatically, with dozens of dangerous events in the first half of this year alone," Ratner said at a Center for Strategic and International Studies event. "And if the PLA continues this pattern of behavior, it is only a matter of time before there is a major incident or accident in the region."

Over the weekend, Gen. Mark Milley, chairman of the Joint Chiefs of Staff, said during a trip to the Indo-Pacific that the Chinese military has "become significantly more and noticeably more aggressive" in recent years.

China views Taiwan, a self-governing democracy located about 100 miles away from China across the narrow Taiwan Strait, as a rogue province that must be united with the Chinese mainland — by force if necessary.

"I think the risks of [an invasion] become higher, it seems to us, the further into this decade you get," CIA Director William Burns said last week at the Aspen Security Forum. It's "less the question of whether the Chinese leadership might choose some years down the road to use force to control Taiwan, but how and when they would do it."

Chinese officials vehemently oppose Taiwanese independence and anything resembling diplomatic relations between the U.S. and Taiwan. As a result, they've been threatening severe consequences if Pelosi's trip happens.

"Should the U.S. side insist on making the visit, China will act strongly to resolutely respond to it and take countermeasures," Chinese Foreign Ministry spokesman Wang Wenbin said last week. "We mean what we say."

"China demands the U.S. take concrete actions to fulfill its commitment not to support 'Taiwan independence' and not to arrange for Pelosi to visit Taiwan," said spokesperson Tan Kefei. "If the U.S. insists on taking its own course, the Chinese military will never sit idly by, and it will definitely take strong actions to thwart any external force's interference and separatist's schemes for 'Taiwan independence,' and resolutely defend national sovereignty and territorial integrity."

Beijing's efforts to "derail" Pelosi's trip "are consistent with its broader efforts to isolate Taiwan diplomatically," said Singleton. "In threatening to respond strongly to Pelosi's planned trip, Beijing is seeking to establish an invisible blockade of sorts around Taiwan, in effect challenging the United States and other countries to think twice about sending other high-level delegations to Taipei," the Taiwanese capital.

Taiwan has been holding a flurry of military drills this week as tensions with China continue to mount.

Amid ongoing tensions, the Biden administration has given public hints that it opposes Pelosi going to Taiwan, reportedly working behind the scenes to warn Pelosi about the risks of making the trip.

The Financial Times, for example, reported that White House National Security Advisor Jake Sullivan and other senior National Security Council officials oppose the trip because of the risk of escalating tension across the Taiwan Strait.

The National Security Council didn't respond to a request for comment, but Kirby told CNN that "none of this has to devolve into conflict," adding, "There's no reason for this to be escalated, even in just rhetoric."

President Biden himself recently told reporters that "the military thinks it's not a good idea right now."

At a press conference last week, Pelosi was asked about Biden's comments. ​"I think what the president was saying is ... maybe the military was afraid our plane would get shot down or something like that by the Chinese​​​​, she said. "I don't know exactly. I didn't see it. I didn't hear it. You're telling me, and I've heard it anecdotally, but I haven't heard it from the president. "

While officials and experts have said it's highly unlikely China would shoot down Pelosi's plane, some have indicated the White House's apparent opposition to the trip could give Beijing cover to take other steps, such as conducting military drills or moving weapons systems to threaten Taiwan.

"The United States has warned [Pelosi] not to go," American Enterprise Institute fellow Oriana Skylar Mastro told The Dispatch. "So, if China responds, then what — is President Biden going to criticize China after he basically said this would be hurtful?"

The U.S. military is planning to increase its movement of forces and assets in the Indo-Pacific region in case Pelosi makes the trip, according to the Associated Press.

When asked for comment, the Defense Department said it normally provides security information to lawmakers considering traveling abroad but said it's not the military's role to weigh in on Pelosi possibly visiting Taiwan.

"It wouldn't be appropriate to comment on any congressional travel possibilities," said a Pentagon spokesperson. "In general, we regularly provide information to members of Congress considering travel as part of their national security oversight responsibilities. As a reminder, Congress is an independent branch of government under our Constitution and members make independent decisions about travel."

Meanwhile, in a rare show of bipartisan support on Capitol Hill, many Republicans are supporting Pelosi should she follow through on her trip.

McCaul "believes the speaker — or any other American official — should be able to visit Taiwan if they would like to," a spokesperson for the lawmaker told Just the News.

"Speaker Pelosi should go to Taiwan, and President Biden should make it abundantly clear to Chairman Xi that there's not a damn thing the Chinese Communist Party can do about it," Sen. Ben Sasse (R-Neb.) said Monday. "No more feebleness and self-deterrence. This is very simple: Taiwan is an ally and the speaker of the House of Representatives should meet with the Taiwanese men and women who stare down the threat of Communist China."

House Minority Leader Kevin McCarthy (R-Calif.) added that Pelosi should go to Taiwan and that he would like to lead a congressional delegation there himself in the future.

"Should Pelosi cancel her trip, it would be seen as a diplomatic victory in Beijing," said Singleton, who cautioned certain steps should be taken to avoid unnecessary provocation.

"Biden administration officials can and should take certain steps to ensure that the trip does not meaningfully provoke Beijing's ire, such as asking the speaker to travel on a non-U.S. military flagged plane," he said. "White House officials will also probably seek to backchannel the trip's limited goals to Chinese officials while reaffirming the United States' commitment to its 'One China' policy."

State Department spokesperson Ned Price on Monday reaffirmed U.S. support for its so-called 'One China' policy, which involves a "robust, unofficial relationship" with Taiwan but no official diplomatic relations or support for independence away from China.

For decades, Washington has maintained a policy of "strategic ambiguity" toward Taiwan, supporting the democratic island with weapons and training to deter China from attacking while simultaneously reassuring Beijing that Washington won't accept formal Taiwanese independence.

Despite the tension, however, "Chinese officials will likely pursue a charm offensive with the United States in the coming months" as Beijing pursues political and economic stability and works to repair its relationships with Australia and Europe, Singleton predicted.

"Beijing is concerned that a breakdown in diplomatic ties has had a chilling effect on bilateral trade and investment," he explained.