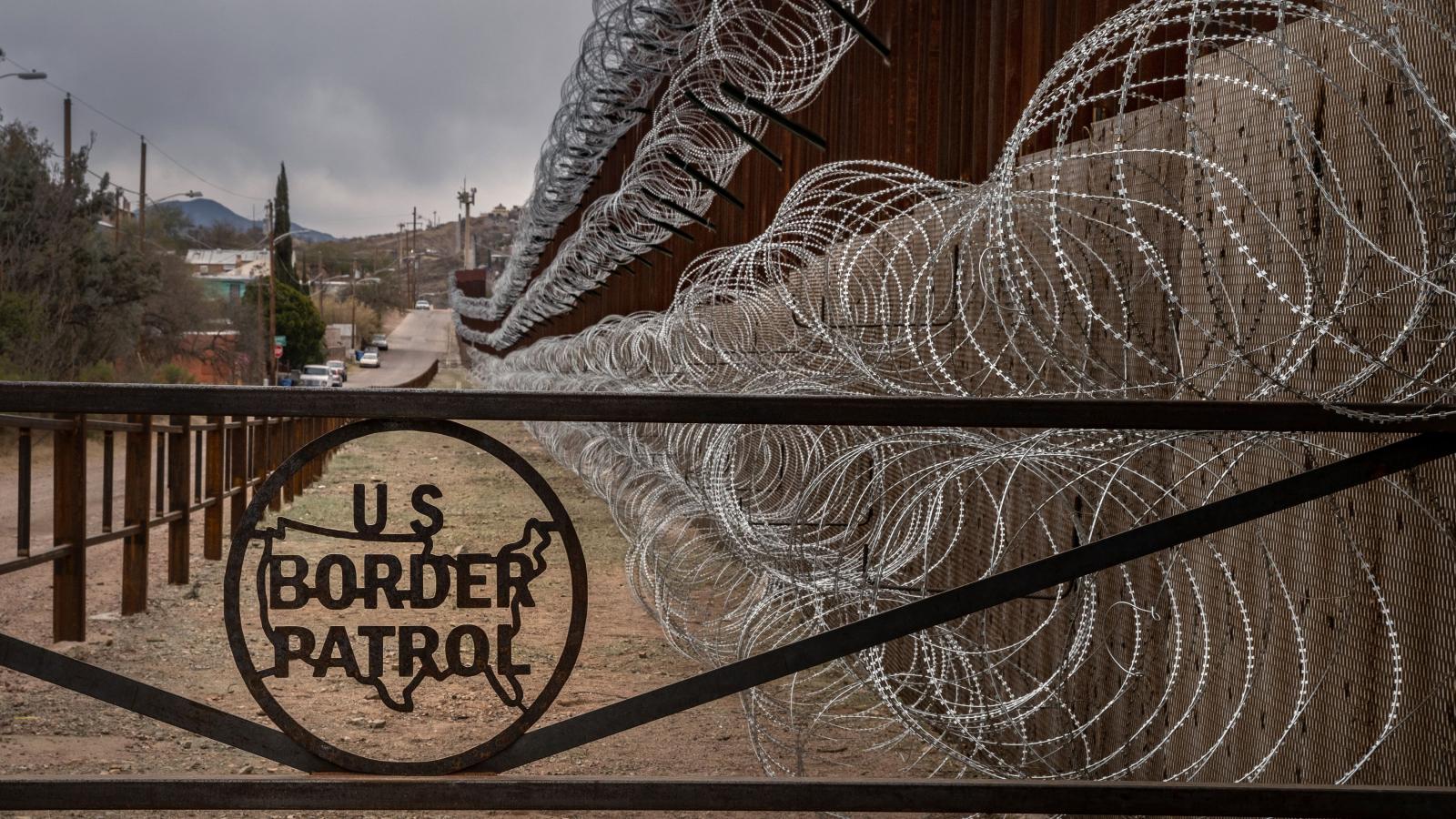 A metal fence marked with the US Border Patrol sign at the US/Mexico border fence, in Nogales, Arizona.
AFP via Getty Images
By Natalia Mittelstadt

Local law enforcement and their communities along the southern border are starting to feel the effects of President Joe Biden's immigration policies, according to findings presented on Sharyl Attkisson’s "Full Measure After Hours."

While reporting the show, Attkisson went to the U.S.-Mexico border and spoke with officials from local law enforcement and the U.S. Border Patrol.

"Almost 90% of the people that are apprehended in this sector, are single adults that try to avoid apprehensions,"said John Modlin, who leads Border Patrol's Tucson, Arizona sector. The sector covers 262 miles of the boundary between the U.S. and Mexico.

In the past four months, border officials said, they have caught and sent back over 296,000 illegal border-crossers.

At the end of 2018, 2,000 immigrants a day were intercepted at the southern border, causing security concerns and a humanitarian crisis, according to the show. In early 2019, the Trump administration used the "Migrant Protection Protocols" to require people to wait in Mexico while seeking asylum. In 2020, "Title 42" — an emergency health order — allowed Border Patrol immediately to turn back illegal immigrants because of COVID-19.

As a result, by May of 2020, 90% of illegal immigrants caught at the southwest border were being expelled. The number of those intercepted dropped from about a million in 2019 to roughly half that number in 2020.

Mayor Mike Laws of Wilcox, Arizona, a small city 65 miles north of the border, said he heard rumors - through a large Border Patrol station that is situated on the edge of town - of a new plan to use his community as a place to bring an overflow of illegal immigrants.

"I don't have soup kitchens. I don't have a facility to even put someone in, to put beds in," Laws said.

Border Patrol's plan is to escort those illegally crossing the border to Wilcox and direct them to the local Greyhound bus stop at the Texaco station.

"Well, they're claiming that we could possibly have 30 to 40 people a day," Laws said. "Do the math. And if they were standing out here and the bus, sometimes, doesn't come for three days. Where are they going to go?"

Laws' biggest concern is what he learned from Border Patrol in a recent meeting to confirm the rumors he heard: unlike U.S. citizens returning home from traveling abroad, illegal immigrants will be allowed into the U.S. without COVID-19 testing.

When asked whether Border Patrol explained why they were not testing the illegal immigrants for COVID-19, Laws said, "They did not. They just said they had orders not to, but yet, we check ourselves for COVID if we get sick. And then he said, 'Well, take them to the hospital.' I asked Moe, the head of the hospital, I said, 'So what do you think about that?' She goes, 'I have 24 beds, and they're full. I can't take any.' "

Sergeant Tim Williams of the Cochise County Arizona Sheriff's Office said, "Normally we'd see between three to 400 a month come across our corridor that we work. We're currently seeing anywhere, 25 to 2,800 come across every month trying to make it North. It's a free ticket to the United States at this point."

Williams said that the communities were "absolutely" upset about this, adding that the meetings he has had with them focus on "trying to convince communities not to take actions in their own hands."

This is because ranchers say that tens of thousands of illegal immigrants cross their land along the border, and allegedly smuggle drugs, leave trash, cut fences, and sometimes break into the residents' houses and trucks.

In late January, an emergency lookout was issued through the El Paso, Texas sector for three Russians "known to have been traveling with a confirmed terrorist." There is still no word on whether they were picked up.

"Illegal immigration is a business," Graham said. "It's a dirty, nasty business. Like drug dealing. You prey on the hopes and dreams of some desperate people, the coyotes and the human traffickers, entices people to pay them money, to get them to the United States, with the hope that they can stay. So that's one aspect of it.

"The other aspect of illegal immigration is drug dealers and people who sell counterfeit goods into the country will take a group of illegal immigrants and have them surge the border, creating a resource problem so they can get their drugs and our counterfeit goods through the border somewhere else," Graham continued. "It’s a multibillion-dollar business. The incentives that Biden is creating is gonna reopen this business big time."

Graham discussed how the immigration system functioned before Trump's administration, and how it had changed by the end.

"So what did Trump do? He said the following to Mexico: 'if you will hold these people in your country until the court date comes, I will help you pay for that.' Guess what?" Graham said. "The Remain in Mexico policy shut down asylum seekers. It went from being full to almost empty ... Why? Nobody's going to pay $20,000 from Guatemala, to wait in Mexico for four years. When the word got out that you can't stay in the United States, that they're going to send you back to Mexico, you're not released in the United States, the whole program dried up."

The Biden administration's changes in immigration policy are going to reverse the progress that Trump's administration made, Graham said.

"Now, word is out that the Remain in Mexico policy is being changed. So the smugglers and the human traffickers are advertising in Guatemala and El Salvador and Honduras and other places that the old system is back," he continued. "Guess what? They're taking the people that were staying in Mexico, they're bringing, bringing them back into the United States. They're going to release some like they used to do. And you're going to turn on the faucet."

Graham explained the triangle agreement the U.S. had with Guatemala, El Salvador, and Honduras under the Trump administration.

"We had an agreement with them that you could apply for asylum in your home country," he said. "That way we didn't have the problem of dealing with you when you got to the border. We've gotten rid of that agreement. We had the Remain in Mexico policy where Mexico would hold these people until their court date, which shut down the flow. We've withdrawn from the triangle agreement. We're going to change the Remain in Mexico policy."