About 250 people were in attendance at the Friendsgiving meal, among them, elected officials, military members, and relatives of deployed troops.

President Biden and first lady Jill Biden visited military members at Fort Bragg, N.C., on Monday to share a "Friendsgiving" meal with them and thank them for their service.

Joe Biden remembered spending holidays without his son Beau when the younger Biden was deployed to Kosovo and Iraq, The Hill reported. Beau died in 2015, after returning home from deployment.

"I want to thank not only you warriors, I want to thank your families because they stand and wait," Biden said. "And I know how hard it is to have someone who is not at the table on a holiday that are in harms' way, that find themselves out of the country because that's what every time — our son was in Iraq for a year, before that, Kosovo."

The president thanked the military members, and said he was proud to be commander-in-chief. After delivering his remarks, he served the troops and their families stuffing, and the first lady served mashed potatoes, according to the news outlet.

There were about 250 people in attendance at the Friendsgiving meal, among them, elected officials, military members, and relatives of deployed troops.

"You're the finest the world has ever seen and I'm so damn proud to be associated with you," Biden said. "We came because we wanted to thank you, tell you how much we care … we owe you big. Thank you."

When the Bidens arrived at the base, hundreds of troops lined up to greet them, in addition to Gov. Roy Cooper (D-N.C.) and Democratic North Carolina Reps. David Price, G.K. Butterfield, Alma Adams, Deborah Ross, and Kathy Manning, The Hill reported.

"And I know what it feels like for all of your families here because you won't be home for the holidays," Jill Biden said in her remarks. "And I know what it's like to see that at the table and just feel like give out just how hard it is for the families. So, I want to thank all of you. That's why we came to have dinner with you to say thank you to you."

"We're so grateful for everything that you do and Joe and I feel like you know, you're family to us and we cannot thank you enough," she added. 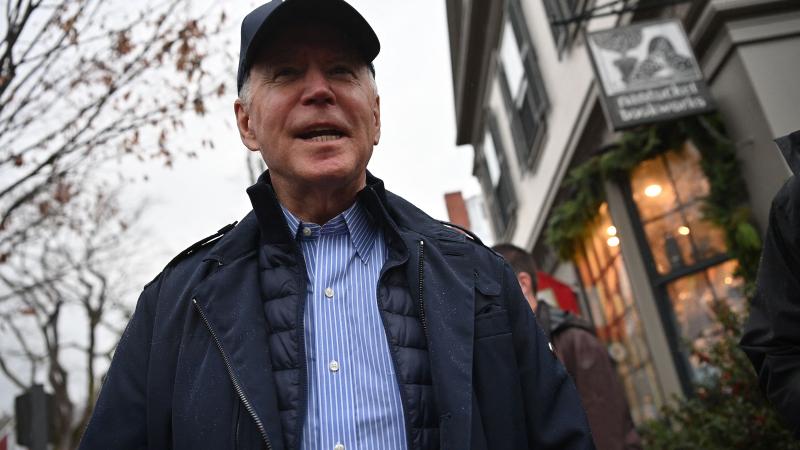