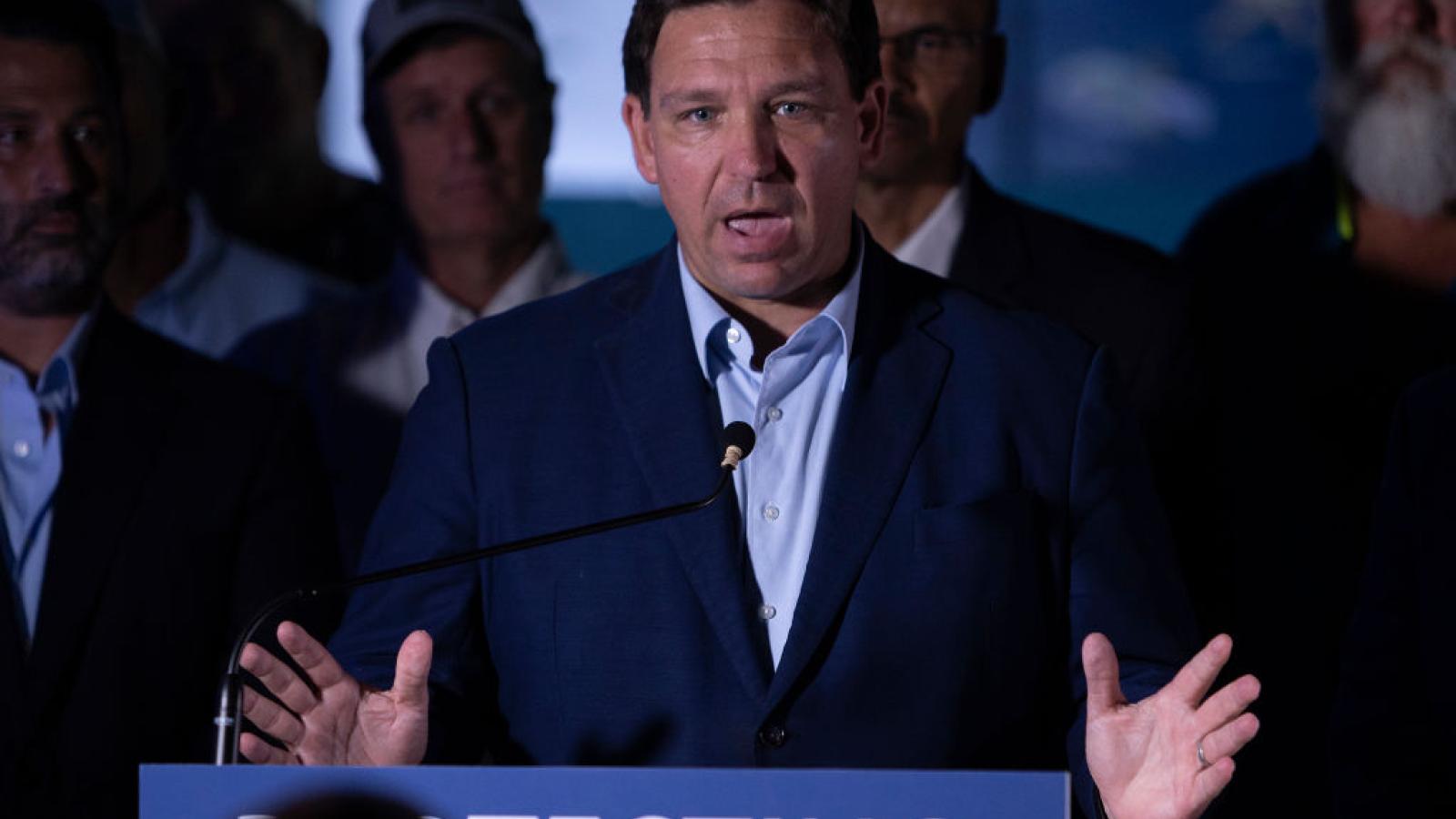 DeSantis on June 8, 2022
(Photo by Joe Raedle/Getty Images)
By The Center Square Staff

With days to go before Election Day, a new campaign ad dropped on Friday describing Gov. Ron DeSantis as one created by God to fight for freedom.

DeSantis is running for reelection to his second term and holds a more than 10-point lead over his Republican-turned-Democratic challenger Charlie Crist.

The governor’s wife, Casey DeSantis, posted the ad on Twitter, saying, “I love you, Ron. On behalf of millions of people, never stop fighting for freedom.”

As black and white images play on the screen of DeSantis with Floridians, a loud male voice states, “On the eighth day, God looked down on his planned paradise and said, ‘I need a protector.’ So God made a fighter.”

The eighth day refers to the creation account in Genesis 1 in the Bible, which states that God created the world in six days and rested on the seventh.

According to the ad, on the eighth day, “God said, ‘I need somebody to get up before dawn, kiss his family goodbye, travel thousands of miles for no other reason than to serve the people; to save their jobs, their livelihood, their liberty, their happiness.’ So God made a fighter.”

It goes on to say, “God said, ‘I need someone to be strong, advocate truth in the midst of hysteria, someone who challenges conventional wisdom and isn’t afraid to defend what he knows to be right and just.’ So God made a fighter.”

It also describes him as a fighter for mothers and children and as a family man.

In another campaign ad, First Lady DeSantis described her husband as someone who fought for her when she was struggling with breast cancer.

She said, “If you want to know who Ron DeSantis really is, when I was diagnosed with cancer, and I was facing the battle for my life, he was the dad who took care of my children when I couldn’t. He was there to pick me off of the ground when I literally could not stand. He was there to fight for me, when I didn’t have the strength to fight for myself.”

Others have also published ads featuring mothers saying DeSantis fought for them during difficult times.

Kiyan Michael, a Jacksonville Republican who’s running for state Rep. in District 16, said DeSantis showed great compassion for her when he learned her son was killed by a “twice deported illegal.”

Her middle son, 21-year-old Brandon, died in a car accident “by someone who should not have been here,” Kiyan said. The “illegal ran into him and hit him so hard that he caused his car to flip and he killed him,” she said. After meeting with DeSantis and telling him about what happened, she said, “he wanted to make sure other lives were protected.”

The governor and state Legislature this year allocated $12 million to transport foreign nationals who entered the country illegally from Florida to sanctuary cities north. Florida has also filed multiple lawsuits against the Biden administration over border security policies that DeSantis and Attorney General Ashley Moody argue are unconstitutional.

The Michaels are “outspoken supporters of Governor DeSantis’ efforts to create stronger laws related to border security to keep other families from having to endure a similar tragedy,” according to her campaign website. Kiyan’s running for office, she says in part, “because our families deserve an America First agenda. The pain that we experienced during our son’s tragedy will have purpose.”

Another mother of a Special Olympics athlete thanked Gov. DeSantis for ending the vaccine mandate imposed by Special Olympics International, allowing her daughter to participate in the 2022 USA Games in Orlando in late June. Isabella, who played golf in a wheelchair with a one-handed swing, placed fourth in individual skills in a co-ed competition. Her mother said of DeSantis, “Without you, this could have never happened.”

Under DeSantis, the state moved to fine SOI $27.5 million for 5,500 violations of a Florida statute that banned COVID-19 vaccine mandates. Rather than pay the fine and cancel the games, SOI conceded at the last minute. At the behest of DeSantis, SOI also issued apologies to delegates who wouldn’t or couldn’t comply with the mandate and couldn’t travel to Florida to compete due to SOI’s last-minute decision.

Crist also published an ad with pro-choice Democratic, Independent and Republican women saying they were “uniting to defeat Ron DeSantis and protect their freedom.”

In September, Crist took criticism for referring to DeSantis as DeSatan while claiming the election was about decency. He said the campaign was “about being decent to one another. About being kind to everyone” while also saying “DeSatan” was a divider and he was uniter; “he’s bad, we’re good.”

In late August, Crist also told Republican Floridians, “If you have that hate in your heart, keep it there. I want the vote of the people of Florida who care about our state: good Democrats, good Independents, good Republicans. Unify with this ticket. Those who are haters: you’re gonna go off in your own world.”