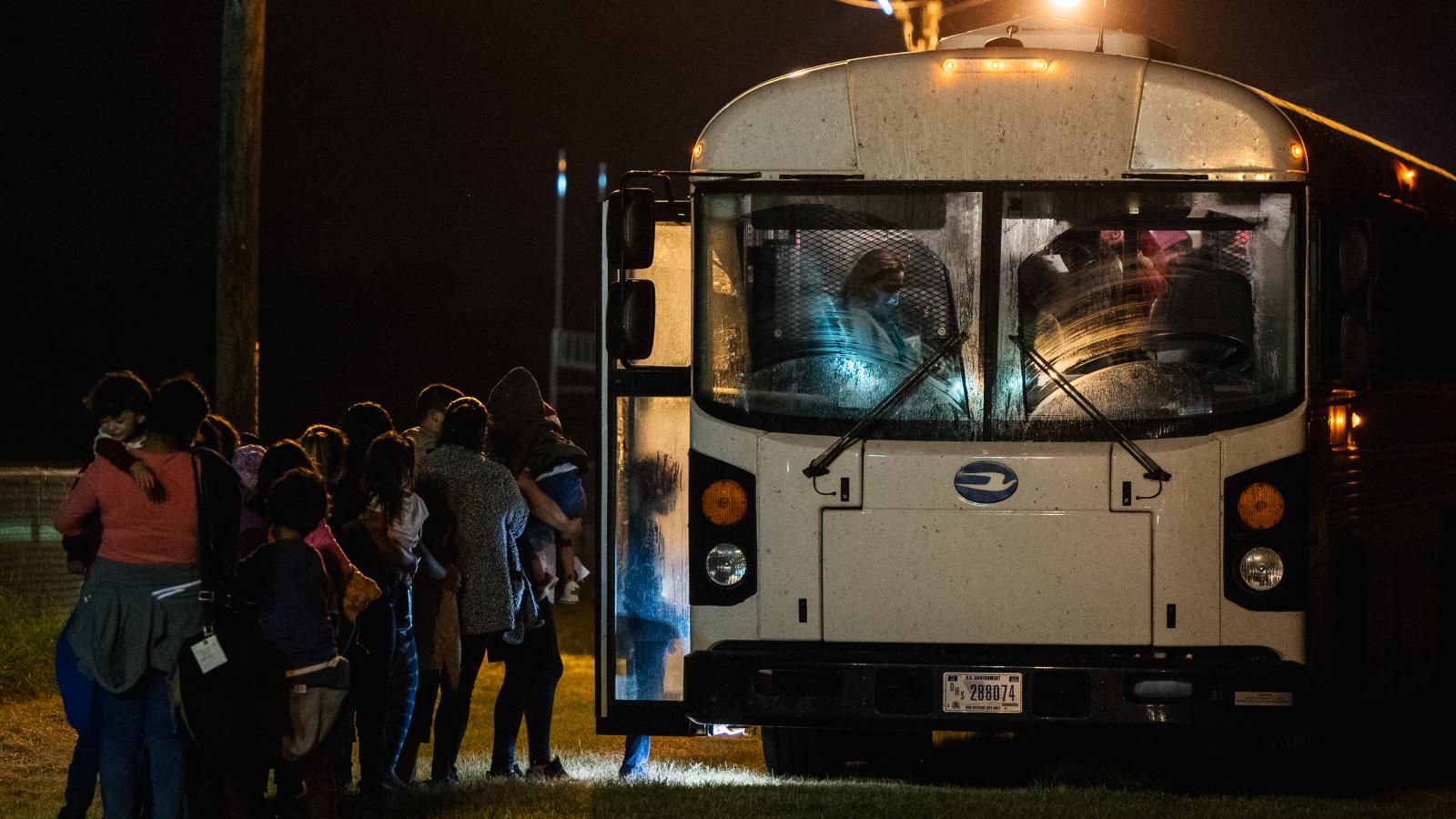 Migrants board a bus near McAllen, Texas, to be taken to a border patrol processing facility.
Brandon Bell/Getty Image
By The Center Square Staff

More than 7,000 COVID-positive migrants have been released into the border town of McAllen, Texas, by Border Patrol since February, with more than 1,500 in the past week, the city reported Wednesday.

As a result, McAllen officials said Wednesday it is building new temporary shelters to deal with a "rapidly escalating" surge of RIMs (refugees, immigrants and migrants) who have entered the U.S. illegally through McAllen and were released by Border Patrol, stretching city resources thin.

"Since mid-February of 2021 there have been over 7,000 confirmed COVID-19 positive immigrants released into the city of McAllen by [Customs and Border Protection], including over 1,500 new cases in the past seven days," the city said.

“The sheer number of immigrants being released into the city has become a crisis: a crisis the City of McAllen did not create and has proactively tried to avoid for seven years,” it added.

McAllen asked Hidalgo County to place a “temporary emergency shelter on property in McAllen on 23rd Street for the overwhelming number of immigrants stranded in McAllen by U.S. Customs and Border Protection.”

The surge of illegal immigration began in 2014 under the Obama administration, McAllen officials said Wednesday, and “has continued for seven years to the present surge the community is now experiencing.”

Hidalgo County Judge Richard Cortez said the nursing shortage in the county compounded by the influx of RIMs testing positive for COVID-19 has the city overrun and understaffed. The infection rate among RIMs has increased by 16%.

U.S. Sen. Ted Cruz, R-Texas, told Fox News the Biden administration’s policy of releasing COVID-positive immigrants instead of expelling them through Title 42 – a Trump-era policy in which infected migrants were sent back to their home countries – is “unacceptable and they keep doing it."

"Joe Biden likes to talk about this pandemic, well I’ll tell you what, the election of Joe Biden and Kamala Harris was a super spreader event because their open border is endangering not just the people of Texas but people all across the country," Cruze added.

Along the southern border, Border Patrol encountered more than 188,000 people entering the U.S. illegally in June, and more than 210,000 in July, according to preliminary numbers. These exclude more than roughly 50,000 who evade capture every month.

While the Biden administration says it is turning away some entering the U.S. illegally under Title 42, all unaccompanied children and families with young children are being processed and released into the U.S. regardless if they have COVID-19 or not.

Texas Gov. Greg Abbott issued an executive order to stop the transportation of RIMs who have COVID on state roads. Abbott was sued by the Justice Department, and a hearing on the matter is scheduled for next week.

The Biden administration is reportedly planning on vaccinating those entering the U.S. illegally, Fox News reports, but this has not happened yet, and officials in McAllen haven’t been told of any such plans.

Florida Gov. Ron DeSantis, whose Florida law enforcement officers are actively helping Texas DPS at the border, called out Biden on Wednesday saying, "Why don't you do your job? Why don't you get this border secure? And until you do that, I don't want to hear a blip about COVID from you.”