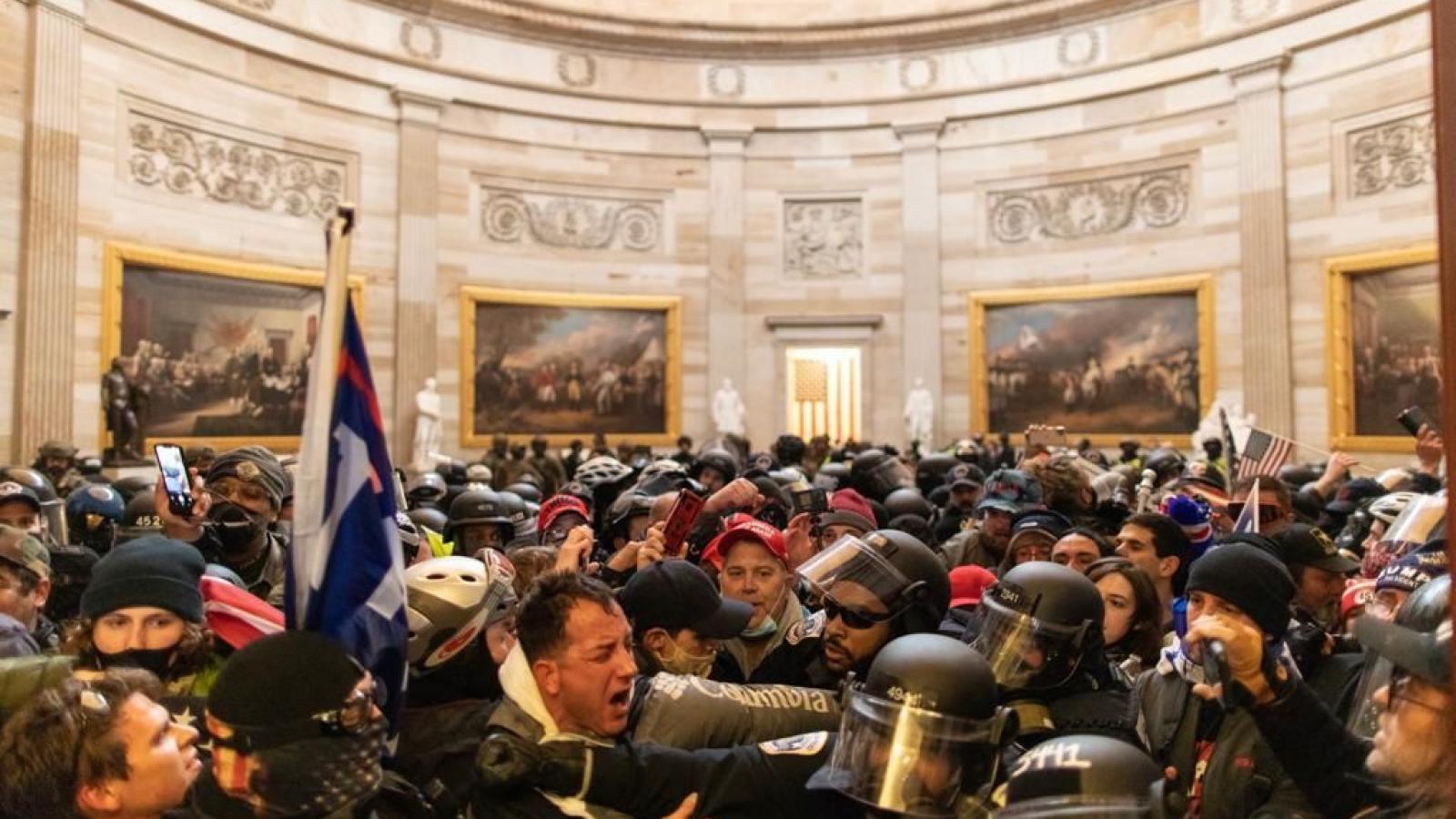 Protesters clash with police in the Capitol, Jan. 6
(Anadolu Agency/Getty)
By Sophie Mann

The House impeachment managers in Donald Trump's Senate trial on Tuesday made their case about the constitutionality of trying a former president with a mix of scholarly legal interpretation, theatrics and personal appeals.

The roughly two-hour case began with a montage of graphic, profanity-laced video clips of the Jan. 6 riot at the U.S. Capitol Building that Trump is being accused of inciting.

The lead House prosecutor, Maryland Democratic Rep. Jamie Raskin told senators, who are serving as jurors in the case, would present "cold, hard facts" against Trump.

"That’s a high crime and misdemeanor," said Rep. Jamie Raskin, D-Md., said in opening remarks, after the videos. "If that’s not an impeachable offense, then there’s no such thing."

Raskin, a Harvard-trained lawyer, closed with a personal account of being in the capitol building with family members on the day of the siege, with people texting what they thought was their last good-byes. He said he is leading this trial in part after a daughter with him that day said she never wanted to return.

"Dad, I don't want to come back," Raskin said his daughter said.

House prosecutors argued there is no “January exception” for a president on his way out the door.

Rep. Joe Neguse, D-Colo., referred to the corruption case of William Belknap, a war secretary in the Grant administration, who was impeached, tried and ultimately acquitted by the Senate after leaving office, according to the Associated Press.

"President Trump was not impeached for run of the mill corruption, misconduct," Neguse argued. "He was impeached for inciting a violent insurrection – an insurrection where people died, in this building .If Congress stands by, it would invite future presidents to use their power without any fear of accountability."

The Senate will decided on the constitutionality of such a trial based on the prosecutors and Trump defense team's arguments.

Democrats and Republicans have gone back and forth about the constitutionality issue for several weeks, but the first day of debate will settle the issue prior to official argumentation beginning – the effort to dismiss is expected to fail.

The House prosecutors also cited the academic opinions of several prominent conservative legal scholars, who in the past weeks and days have said that there is no constitutional argument as to why the trial should not be allowed to proceed.

Neguse, who practiced law prior to his political career, called forth historical examples dating back a century and a half to the first impeachment trials, several of which featured government figures who resigned prior to the commencement of the proceeding.

Trump's attorneys have, on the other hand, dismissed that precedent and said that not only is the trial moot now that Trump is private citizen and therefore cannot be removed from office, but that the language of the Constitution is on their side.

The day began with the Senate body's vote on the impeachment rules.

Last month, 45 Senate Republicans voted against moving forward with impeachment proceedings, indicating that the former president will almost certainly be acquitted. Democrats need at least 17 Republicans to vote with their party in order to convict Trump.