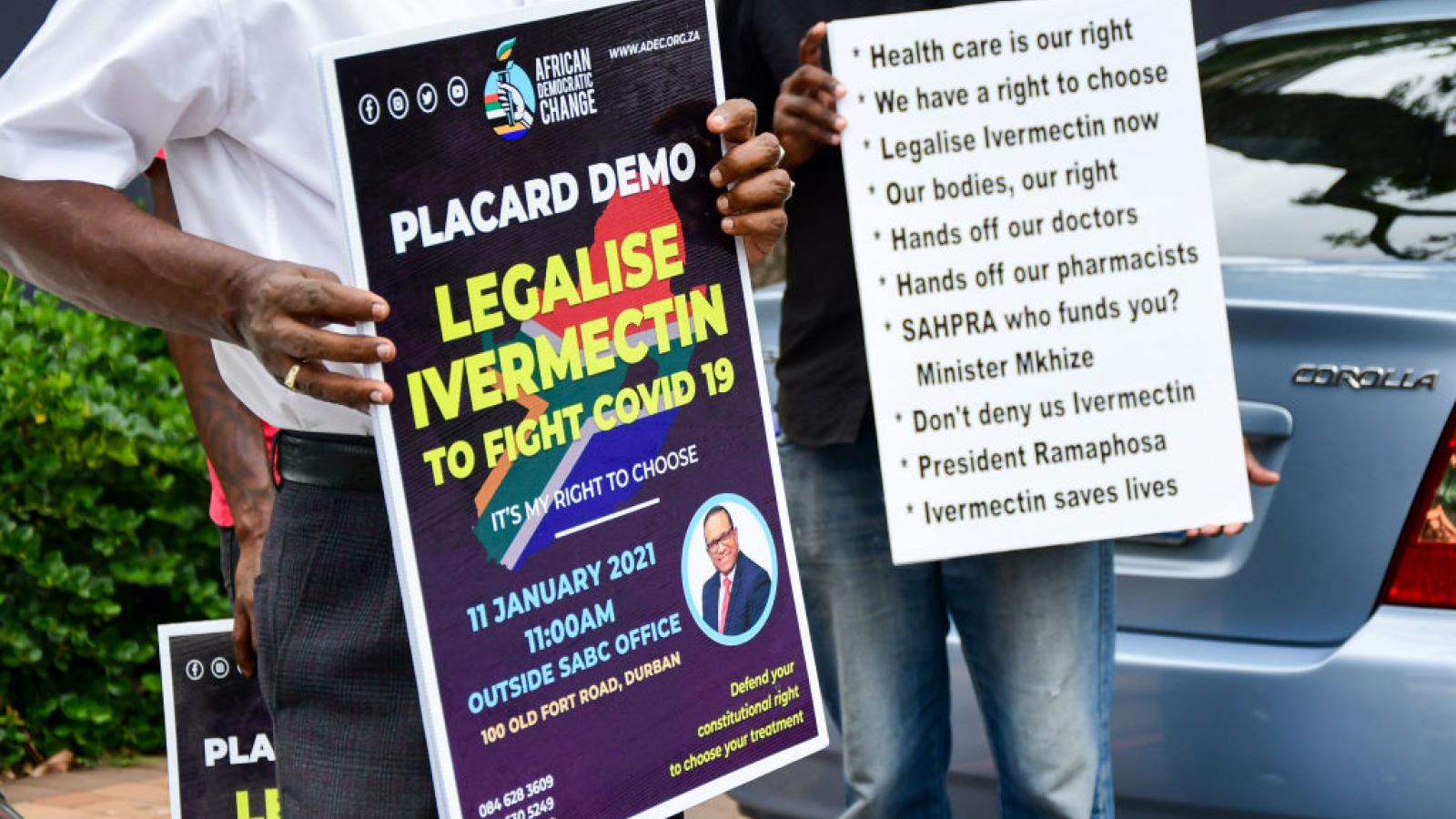 In an effort to dissuade people from taking Ivermectin to treat COVID-19, the Food and Drug Administration (FDA) has been running public service announcements and radio ads nationwide. A group of doctors and researchers argue clinical trials show it is effective against treating COVID-19, and others point out the Nobel-prize winning drug has been safe for human use for over 20 years.

In its consumer update, accompanied by a photo of a woman dressed in scrubs walking next to a horse, the FDA states, "Clinical trials assessing ivermectin tablets for the prevention or treatment of COVID-19 in people are ongoing."

The advisory doesn't warn against taking the drug but taking it for COVID-19 and taking the veterinary version.

"If your health care provider writes you an ivermectin prescription, fill it through a legitimate source such as a pharmacy, and take it exactly as prescribed," the FDA update advises. "Never use medications intended for animals on yourself or other people. Animal ivermectin products are very different from those approved for humans. Use of animal ivermectin for the prevention or treatment of COVID-19 in humans is dangerous."

The same image with a horse was posted on Twitter by the FDA, accompanied by a folksy warning against taking the drug: "You are not a horse. You are not a cow. Seriously, y'all. Stop it."

The FDA approved Ivermectin created by Merck & Co., Inc. Oct. 8, 1998 for use in humans to treat infections caused by roundworms. Its inventors received the Nobel Prize in Physiology or Medicine for its discovery in 2015, with the announcement noting its "consequences in terms of improved human health and reduced suffering are immeasurable."

In the more than 20 years that ivermectin has been administered to people, the FDA and other federal agencies have never issued a warning related to the drug causing serious injury, toxicity or death.

The Center for Disease Control's Overseas Refugee Health Guidance lists safe and effective vaccinations and medications to be given to U.S.-bound refugees, including Ivermectin, citing research dating to 2000. All Middle Eastern, Asian, North African, Latin American, and Caribbean refugees "should receive presumptive therapy," including Albendazole and Ivermectin, it states, excluding pregnant women and children under a certain weight and height.

A 2020 report published by the U.S. National Library of Medicine suggests that the drug is effective in treating COVID-19 in the early stages of the virus. It states that "ivermectin inhibits the replication of viruses in vitro" and its "antiviral mode of action suggests an inhibitory effect on severe acute respiratory syndrome coronavirus 2 (SARS-CoV-2) replication in the early stages of infection." However, it notes, "Currently, evidence on efficacy and safety of ivermectin for prevention of SARS-CoV-2 infection and COVID-19 treatment is conflicting."

The study resulted in several Indian provinces using ivermectin as a prophylactic and treatment for COVID-19 in mid-2020.

Roughly one year later, in a study published by the American Journal of Therapeutics, researchers argued Ivermectin has an "established safety profile through decades of use" and "could play a critical role in suppressing or even ending the SARS-CoV2 pandemic." They evaluated the results of Ivermectin tested in 24 randomized controlled clinical trials involving 3,406 participants, assessing its efficacy in reducing mortality and secondary outcomes in people with, or at high risk of COVID-19.

They found that Ivermectin's antiviral and anti-inflammatory properties were beneficial and that it reduced risk of death compared with no ivermectin in COVID-19 patients by an average of 62% (risk ratio .38%). They also found that ivermectin prophylaxis reduced COVID-19 infection by an average 86% (95% confidence interval 79%–91%).

"Moderate-certainty evidence finds that large reductions in COVID-19 deaths are possible using ivermectin," they concluded. "Using ivermectin early in the clinical course may reduce numbers progressing to severe disease. The apparent safety and low cost suggest that ivermectin is likely to have a significant impact on the SARS-CoV-2 pandemic globally."

Likewise, Dr. Tess Lawrie, director of Evidence-Based Medicine Consultancy Ltd., who consults with the World Health Organization, said, "We have an incredibly positive and uplifting message to share: ivermectin treats and prevents COVID and it is the key to unlocking the never-ending cycle of pandemic peaks and personal restrictions and will help restart economies."

An organization she has partnered with, Frontline COVID-19 Critical Care Alliance (FLCCC), has been calling for widespread adoption of ivermectin as a prophylactic and treatment of all phases of COVID-19. FLCCC president Dr. Pierre Kory, former professor of medicine at St. Luke's Aurora Medical Center in Milwaukee, testified before the Senate Committee on Homeland Security and Governmental Affairs last December and before the NIH COVID-19 Treatment Guidelines Panel Jan. 6 on the benefits of the drug to treat COVID-19.

FLCC also analyzed the findings from 27 studies on the effects of ivermectin and found that it "demonstrates a strong signal of therapeutic efficacy" against COVID-19. As a result, its doctors maintain, "The data shows the ability of the drug Ivermectin to prevent COVID-19, to keep those with early symptoms from progressing to the hyper-inflammatory phase of the disease, and even to help critically ill patients recover."

The group also published a database of the results of 113 ivermectin COVID-19 studies, including 73 peer reviewed, 63 with results comparing treatment and control groups. Of the 63 controlled studies, the data shows a 69% improvement among patients for early treatment. The 63 trials involved 613 scientists and 26,398 patients in 31 randomized controlled trials.

Despite this, the NIH maintains that "no clinical trials have reported a clinical benefit for ivermectin in patients with these viruses," while at the same time acknowledging, "Some studies of ivermectin have also reported potential anti-inflammatory properties, which have been postulated to be beneficial in people with COVID-19."

"The hatred for Trump deranged these people so much, they're unwilling to objectively study it," said Paul,  the Cincinnati Enquirer reported. "So someone like me that's in the middle on it, I can't tell you because they will not study ivermectin. They will not study hydroxychloroquine without the taint of their hatred for Donald Trump."

Others have hypothesized financial motives at work.

"The overall market for COVID-19 drugs and vaccines is projected to peak this year at $67 billion, drop to $61 billion in 2022," BioSpace.com reports. It notes that the Pfizer and Moderna mRNA injections cost governments between $19.50 and $37.00 per dose, excluding cooling and storage costs.