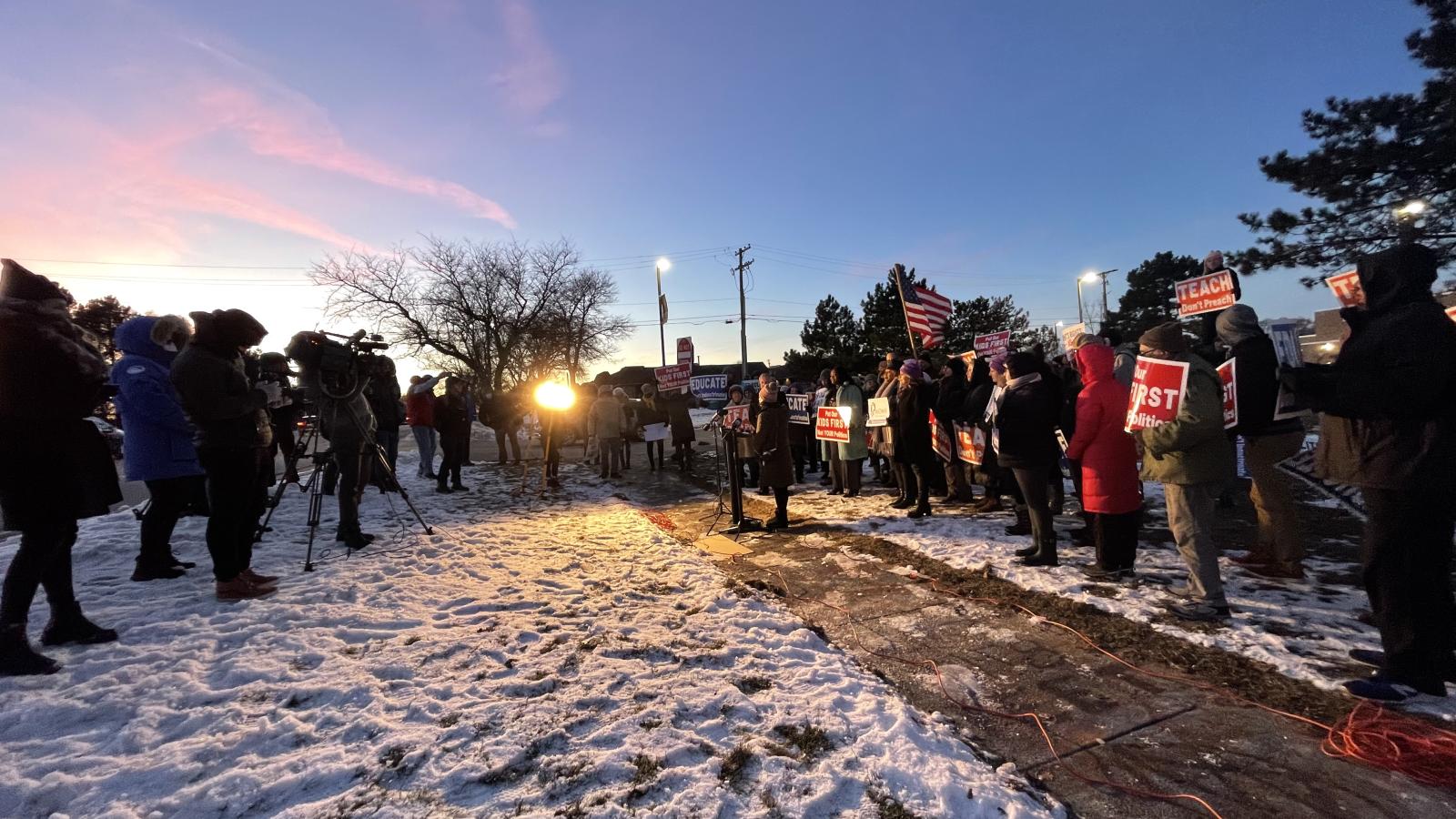 As concerned parents in a Detroit suburb made their voices heard regarding a school district program focused on Diversity, Equity, and Inclusion (DEI), the school board continued to double down on the effort.

Parents of K-12 students at the Michigan Farmington Public School District, along with the nonprofits Farmington Kids First and Moms for America, held a press conference and rally prior to the BOE's meeting on Tuesday evening in protest of the district's "21 Day Equity Challenge" that took place in November.

The district's "21 Day Equity Challenge" was a voluntary course for school staff and parents that focused on a different aspect of social justice each day, such as "race and class privilege" and "gender and sexuality."

In the course, statements like "America is the land of opportunity" were listed as microaggressions, which participants were told "are the everyday verbal, nonverbal, and environmental slights, snubs, or insults, whether intentional or unintentional, that communicate hostile, derogatory, or negative messages to target persons based solely upon their marginalized group membership."

Board of Education President Terri Weems noted during the board meeting that the BOE received many positive and negative responses to the "21 Day Equity Challenge" program, and commented that some opposing it were from outside the community.

Weems added that there are "no plans to discontinue our Diversity, Equity, and Inclusion efforts," to which many in the audience clapped and booed.

During the press conference prior to the board meeting, Andrew "Rocky" Raczkowski, leader of the Oakland County Republican Party, called for the school district to stop the equity program, according to the Michigan Star.

Raczkowski, who grew up in the district, spoke during the board meeting's public comments portion, explaining his "disgust" for the "21 Day Equity Challenge" program.

A son of immigrants who survived Nazi labor camps, Raczkowski said that despite being dyslexic and told by his school growing up that he "wouldn't amount to anything," he joined the military, graduated law school, and became a state representative of the district.

"We are stand[ing] against racism, we stand with you for inclusion, we stand with you and diversity, but bring us to the table before you put something out and call it a victory and then take it off your website and say that the community didn't participate," he concluded, referring to the equity challenge.

At the meeting, there were more who spoke in support of the equity challenge than those who opposed it. However, many protestors were outside the meeting room.

Anyone was able to provide public comments at the meeting, regardless of whether or not they were residents of the school district.

Many of those who were against the challenge focused on DEI and equating it to Critical Race Theory, which argues that racism is systemic in all of American society and that all disparities between the races indicate racial discrimination.

However, a member of the Michigan State Board of Education, Tiffany Tilley, in response to those statements, noted that the state sets the standards for curriculum and said that Critical Race Theory is only taught on the collegiate level.

"Critical Race Theory is a theory, it's not history, but it analyzes how systemic racism is in the legal system," Tilley said.

"We have changed social studies standards, as you are well aware of. So we wanted to make sure that, in the social studies standards, that we do address race ... We wanted to make sure that, as you are addressing here -- Diversity, Equity, and Inclusion -- and I want to thank you all for taking the lead on that. This is so important. I know that this is a sensitive subject for so many people, but it is so needed."

A social studies teacher for 28 years in the Farmington school district at the meeting said that he taught "Diversity, and Equity, and Inclusion because that is the heart of social studies and the core of American history."

Tamra Farah, Executive Director of MomForce, a project of Moms for America, told the John Solomon Reports podcast earlier on Monday that the school district is just "repackaging" Critical Race Theory with the three-week program. She added that, for students, "the infiltration and adoption of this Critical Race Theory as fact actually ensures that when they go to school, they are being taught to be racist."

During the meeting, Michigan student Grace McBride said, "This 21-day challenge isn't educating people, it's selling them their own oppression."

McBride, who wasn't wearing a mask, pointed at the chairs for the audience, saying, "And frankly, you're causing diversity with the tape for the unmasked and the masked. Why is there only tape across these seats and not tape all across the masked people? I don't want to be near the masked, vaccinated people right now, just like they don't wanna be near me."

Sue Kahn, who also lives in the district, said that when her three children went through the school system, "it was one of the best districts in the state. It was certainly a top district in the county. That's not true anymore." She cited a ranking by Niche that places Farmington Public Schools at 63rd in the state.

"I begged you for years to focus on education, and you have failed to do that," Kahn said, after noting a couple of examples in the past years where the school district had speakers who denigrated Thanksgiving and the military.

Some parents noted that they had pulled their kids out of the school district to homeschool them.

One of the mothers who decided to homeschool her children after they had attended a nearby public school district said that she wanted to "thank the board and all the boards for making our homeschool community explode. It is amazing! We have so many kids because of all the things you guys are doing. Thank you!"

Weems concluded the meeting, saying, "I love this community, I love this country. When I hear that this country was based on equality, but I fail to hear the recognition that equality didn't mean black people. It didn't mean women. And it didn't mean the LGBT community. That's a fact. But we've come a long way, and I acknowledge that, and I appreciate that. We still have a long way to go. And for that reason, it is extremely important for us to continue our DEI efforts."