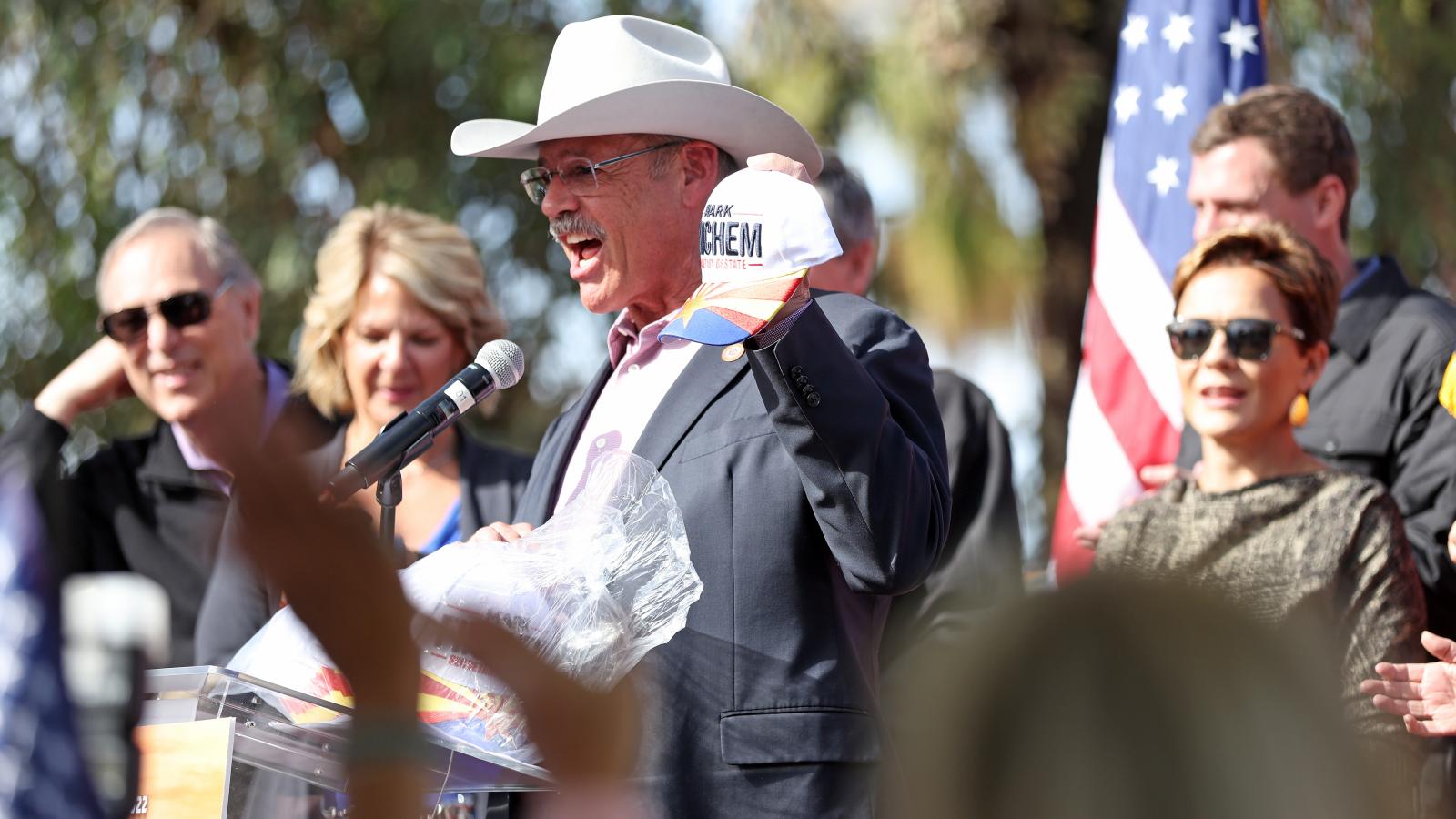 After the races for Arizona's U.S. Senate seat and secretary of state were called for the Democrat candidates with more than 10% of the vote still uncounted, the GOP nominees' message is that voters, not the media, determine the outcome of elections.

The U.S. Senate race in Arizona was called for Democratic incumbent Sen. Mark Kelly late Friday night by a snowballing succession of media organizations with Kelly enjoying a roughly five-point lead over Republican opponent Blake Masters and more than 80% of the estimated votes counted.

Following the media projections of Democrat wins in the state, the Republican candidates called for all votes to be counted before the winners are announced.

Finchem believes his race "was called prematurely," he told Just the News on Saturday.

"No one contacted me about their call, and frankly the news does not make the call, the people do," said the candidate, who has not conceded the race.

On Saturday, Finchem tweeted: "It is completely ridiculous that the #FakeNews is calling the elections in Arizona when there are 390k (many election day) ballots outstanding. RIDICULOUS! #AZSOS"

The campaign of Arizona Republican gubernatorial nominee Kari Lake was reporting on Friday that much of the state's outstanding vote comprises Election Day ballots, which they expect to skew heavily in favor of the GOP.

Masters tweeted a statement on Saturday: "For my people who knocked doors in 115 degree heat, and for the million+ Arizonans who put their faith in me, we are going to make sure that every legal vote is counted. If, at the end, Senator Kelly has more of them than I do, then I will congratulate him on a hard-fought victory. But voters decide, not the media; let's count the votes."

On Saturday, Lake's campaign Twitter account posted: "We're not in the business of spreading false hope. Our confidence hasn't wavered & we haven't moved an inch since election day. @KariLake will be the next Governor of Arizona."

The Twitter account retweeted a post on Saturday from Turning Point USA COO Tyler Bowyer about the number of uncounted votes left in Maricopa County, which Bowyer said "spell out KARIZONA," implying a win for Lake.

As of Saturday evening, less than 90% of the votes were tabulated, and the state's races for governor and attorney general had yet to be called as the Democrat and Republican candidates were less than 2 points apart.

Methods used for calling races vary among media organizations' decision desks. For example, the Associated Press has a "vote count reporter at nearly every county election office in America on Election Day." The reporter will call an AP vote entry clerk and report the raw vote totals when they are made available.

AP has another group of clerks that monitors election results displayed on state and county websites. The wire service "also takes in feeds of results directly from election officials where they are provided."

AP says it has multiple checks in place so that the vote total numbers are viewed "from every possible angle in search of discrepancies or apparent inconsistencies."

When calling races, AP says it does so when there is no possibility for candidates that are trailing behind the leader to catch up. In some cases, AP will call races as soon as polls close. The news wire explains that this occurs when races aren't close.

"In some states, a party or candidate's history of consistent and convincing wins — by a wide margin — make a race eligible to be declared as soon as polls close," according to the outlet. "In these states, we use results from AP VoteCast to confirm a candidate has won."

AP's "race callers and Decision Team are driven entirely by the facts," the news wire claims. "Race calls made by other organizations have no bearing on when AP declares a candidate the winner. Our team does not engage in debate with any campaign or candidate."

Unlike other media outlets, AP no longer uses exit polling to call races because "many voters don't vote at polling places on election days anymore."

NBC News, on the other hand, is part of the National Election Pool, which "is a consortium of major news networks — ABC, CBS, CNN and NBC — that pools resources to gather vote data and exit poll data." The outlet "uses exit poll data to determine whether uncompetitive races can be called" early on election night.

"Most races are called based on analyses of precinct- and county-level vote returns," according to NBC News' website. "The analyses also examine differences between early and Election Day votes. In close contests, a careful analysis of how much of the vote has not been counted is a crucial part of the process. No race is projected until the Decision Desk is at a minimum 99.5% confident of the winner."

Similar to AP, NBC News counts votes by having their data reporters get "raw vote results on a county-by-county basis" from local election officials. When state and county vote computer feeds are available, it is used to supplement the raw vote results that the reporters obtain.