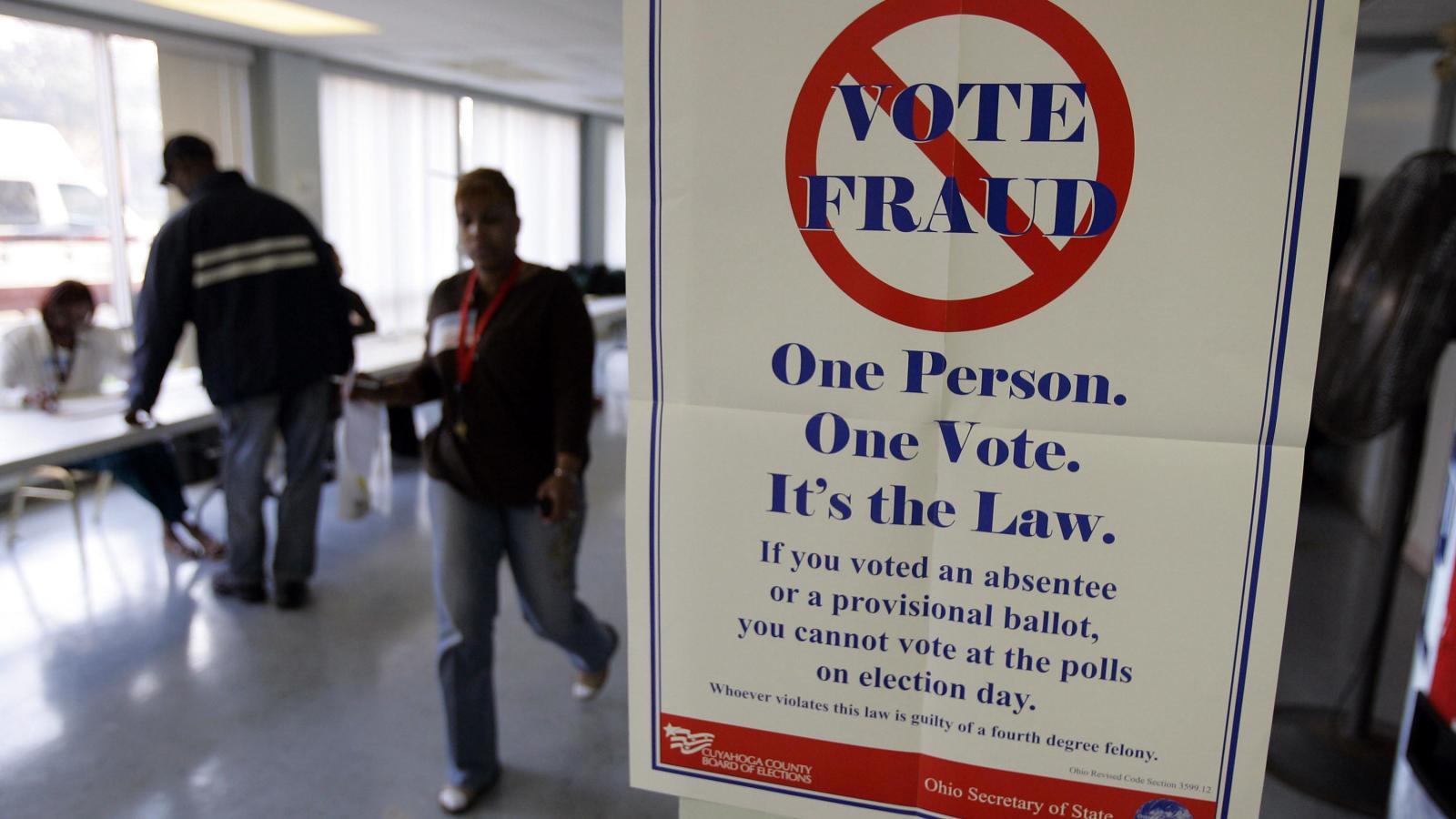 Elected officials and like-minded activists across the country are refusing to cooperate with ongoing efforts to thwart voter fraud and promote the integrity of future elections, lambasting such efforts as antidemocratic campaigns to overturn the results of the 2020 presidential election.

The apparent resistance of mostly Democratic and some Republican figures to investigating allegations of election fraud and supporting reforms to decrease its likelihood comes at a time when millions of Americans say they don't have faith in the country's electoral process.

State officials, including many in Republican-run states, have said they found no evidence of widespread fraud in the 2020 election that could've altered the outcome. An Associated Press review of potential cases of voter fraud in the six battleground states disputed by former President Trump found hundreds of cases — far too few to have made a difference.

However, several states have acknowledged that serious irregularities or unlawful changes to election rules occurred in 2020 and are investigating what happened. In some cases, lawmakers are proposing changes to shore up holes in the system that allowed irregular or fraudulent activity to take place — while meeting intense resistance from political opponents.

In Wisconsin, for example, Michael Gableman, a special investigator leading one of the probes into the state's 2020 elections, has said Wisconsin's Elections Commission, its administrator, and two big-city Democratic mayors have refused to answer any of his questions about the Center for Tech and Civic Life (CTCL), a Chicago-based nonprofit funded by Mark Zuckerberg. Gableman added that they've refused to cooperate with the subpoenas issued in the case.

"[Green Bay Mayor] Eric Genrich and [Madison Mayor] Satya Rhodes-Conway have chosen to ignore the subpoenas issued by the Wisconsin Assembly because they have no intention of answering uncomfortable questions about what they did with the millions of dollars in Zuckerberg money that they took," said Gableman, a former Wisconsin Supreme Court justice.

Green Bay and Madison, along with three other of Wisconsin's biggest and most Democratic cities, accepted nearly $9 million from the CTCL in 2020, purportedly for COVID-19 safety measures. Gableman claimed the money was instead used to help elect Democrats.

"Reasonable minds might wonder whether the millions of dollars each of these mayors received from the Zuckerbergs may have induced them to do something other than treat all candidates fairly and impartially," Gableman said. "And whether those mayors used the Zuckerberg money to get out the vote for Joe Biden."

One now-retired Wisconsin elections clerk previously told Just the News that the CTCL money was used to "take over" the election.

The mayors have said that Gableman's subpoenas ask for too much information and that it would take too long to comply with his requests.

Meanwhile, Wisconsin Attorney General Josh Kaul is pushing to stop Gableman's investigation with a lawsuit, which seeks to stop him from asking questions of Elections Commission Administrator Meagan Wolfe.

Additionally, election clerks for several Wisconsin counties said they wouldn't forward emails to municipalities in their jurisdiction as Gableman requested. Some of the clerks pushed back on the notion that fraud occurred on their watch, while others expressed confusion over the format of the email.

In Georgia, meanwhile, Republican state Sen. Butch Miller last week pre-filed a bill that would remove all drop boxes for absentee ballots, which were first instituted in Georgia near the start of the COVID-19 pandemic.

"This measure heightens ballot security, restores faith in the integrity of our elections, and does not decrease access for legal voters," Miller wrote in a statement. "It's impossible to know if drop boxes led to fraud during last year's election because many counties failed to do the surveillance that was required by law."

Miller, the state Senate president pro tempore and a candidate for lieutenant governor, added that ensuring security and surveillance for drop boxes was an unnecessary burden for counties across Georgia.

"Our system is built on in-person voting and we provide tremendous access ... to early voting as well as Election Day," he said.

Miller sees them as "an emergency measure during the pandemic, but many counties did not follow the security guidelines in place, such as the requirement for camera surveillance on every drop box."

"Removing drop boxes," he continued, "will help rebuild the trust that has been lost. Many see them as the weak link when it comes to securing our elections against fraud. For the small number of Georgians who need to vote absentee, that will remain as easy and accessible as it was before 2020."

In Pennsylvania, Delaware County District Attorney Jack Stollsteimer launched an investigation last month into videos that appear to show county election officials destroying ballots and machinery in the 2020 election. The videos, recorded by a whistleblower, are part of a lawsuit brought by Delaware County residents, including a woman who ran unsuccessfully for the state House last year as a Republican.

In the 92-page complaint, the plaintiffs say they requested election return sheets of reported and machine recorded election results with supporting documentation in a request under Pennsylvania's Right to Know Law (RTK).

"The defendants fraudulently and intentionally deleted, changed, adulterated, manipulated, and/or obscured the information, data, and materials produced in response to the RTK request in order to hide their fraud and election code violations because they knew that they could not reconcile the previously fraudulently reported November 3, 2020 election results with the actual responsive information that they had in their possession and which they were required to preserve and produce in response to the Right to Know request," according to the suit.

"We are confident that in the end the allegations will be proven to be fabricated and wholly without merit, and that our systems are worthy of your trust," Lazarus added.

Also in Pennsylvania, Democrats are pushing this month to block a subpoena from state Senate Republicans, who seek information on voters and election systems. Democrats argue the subpoena serves no legitimate legislative purpose and feeds into Trump's election narrative. Republicans say they want the necessary information to improve election law, regardless of the implications for the 2020 election.

In Arizona, the state Senate's audit of the presidential election results in Maricopa County reaffirmed vote totals sufficient to confirm a Biden victory statewide but also revealed tens of thousands of mail-in ballots voted from a prior address while thousands of people potentially voted in multiple counties. Additionally, there were thousands "more duplicates than original ballots," according to the audit.

Following the 2020 election, Maricopa County supervisors clashed repeatedly with the Senate over how the audit should be conducted, resisting subpoenas to turn over the ballots and voting machines from the November vote. The county only began to comply after a judge for the Maricopa County Superior Court ordered it to do so.

Then in early August, county supervisors refused to comply with a subpoena issued by the Senate, which sought local computer routers and internal logs to conclude its audit.

"It is now August of 2021," Board of Supervisors Chairman Jack Sellers (R) wrote in a letter to the Senate. "The election of November 2020 is over. If you haven't figured out that the election in Maricopa County was free, fair, and accurate yet, I'm not sure you ever will. The board has real work to do and little time to entertain this adventure in never-never land."

Both sides eventually reached an agreement over subpoenas issued for routers and digital logs when a potential fight in the Arizona Supreme Court threatened to cost the county hundreds of millions of dollars.

Then, in October, county supervisors acknowledged in congressional testimony that they deleted and archived 2020 election data from the county server, whose materials were subpoenaed to be handed over to the auditors. The supervisors told lawmakers the archived data wasn't handed over because it wasn't subpoenaed, noting that the server had limited space and that data needed to be archived to make room for future elections.

Critics countered that the subpoena required the county to hand over all records related to the election, including what was archived.

After the audit was released, Democrats hailed its conclusion about the accuracy of the vote count in Maricopa County as vindication of the entire election process there.

"The truth is simple and clear: Arizona's elections are safe and secure," said Arizona Senate Democratic leader Rebecca Rios. "They are now and always have been. Because our elections are run by Republicans and Democrats committed to ensuring a safe process."

Some on the right, meanwhile, denounced the audit's reaffirmation of the vote count as a cop out that soft-pedaled fatal flaws in the process that produced the ballots that were counted.

The two sides had one thing in common: Both were focused on the outcome of the 2020 election — which misses the point of audits, argues one election observer.

"Those who are dismissing this audit [and] now say, 'Well, see, it wasn't necessary because it'll show that Biden actually won the election' are losing track of what an audit is supposed to do," Heritage Foundation senior fellow Hans von Spakovsky said in October following the audit's release. "It's not actually to overturn an election. It's to see whether there were mistakes, omissions, discrepancies in the election.

"And while [the results] may confirm that in fact Biden was the proper winner, election officials in Arizona should not simply dismiss this audit, not take any steps. What they need to do is take the audit report and investigate those mistakes, those discrepancies, those problems to see did they occur, and if so, they need to change their procedures to make sure it doesn't happen again."

In each of the above cases and others across the country, critics of the election integrity measures framed them as efforts to promote the "Big Lie" that the presidential election was stolen from Trump due to voter fraud and irregularities.

Others counter that, regardless of the 2020 election, more needs to be done to stamp out fraud and restore faith in American elections.

According to recent polling, the vast majority of Republican voters don't trust elections, while less than half believe next year's midterm elections or the 2024 elections will be fair.