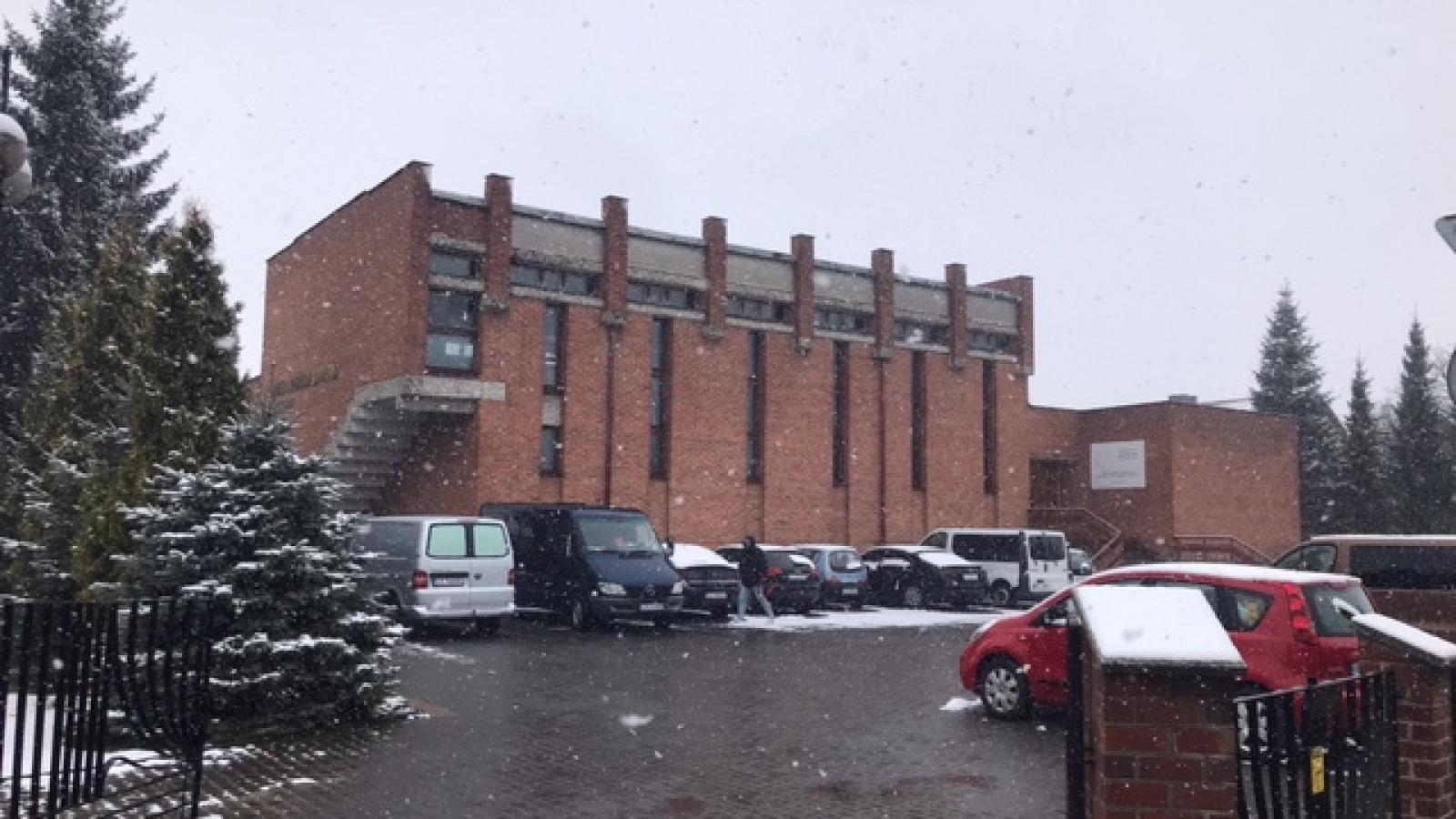 More than 2 million refugees have fled Ukraine for Poland amid the ongoing Russian invasion, yet as one moves just miles over the border, evidence of the conflict becomes scant.

Situated just 15 miles to the West of the Ukrainian border is the city of Chełm, where despite the refugee crisis, there are no tent cities. In fact, only the occasional passing by of military trucks and the scattered army recruitment posters indicate anything is out of the ordinary.

This is because the people of Chełm have made enormous efforts toward building a network in Poland and the European Union to house, supply, and transport the bevy of Ukrainians entering their country.

At the center of this effort is the Chełm Baptist Church. Here, refugees have a place to stay for a few days before heading further west in pursuit of more permanent arrangements. While many such centers exist in the border towns, what sets the Chełm house of worship apart is the sheer volume of refugees it processes, the plethora of foreign volunteers manning the fort, and the unrivaled supply drives it organizes to send food and vital goods back the other way.

Pastor Henryk Skrzypkowski, who has led the church intermittently since the 1990s, has mobilized a network of faith leaders and international volunteers, told Just the News that he began the church’s ministry for refugees on “the first day of the war,” but added that he did not expect to have the international support the church has thus far received.

“The first night we had 12 Ukrainians. The next day, there was 40. And the next day, it was Saturday. We bought 40 more mattresses and 100 blankets… and the third night we had more than 100 and the first week we had more than 250 in this building for one night.” He went on to describe the second week as the most difficult for the church and said there were roughly 350 people staying in the church at any given time.

The volume of refugees arriving in Chełm has since fallen off, but the inflow remains steady. At the time of the interview, there were roughly 30-40 refugees staying in the church, which the pastor described as a “good number,” but noted the total number of volunteers working there was close to 100 people, including foreigners, locals, and parishioners, which significantly helped the church handle the incoming Ukrainians. 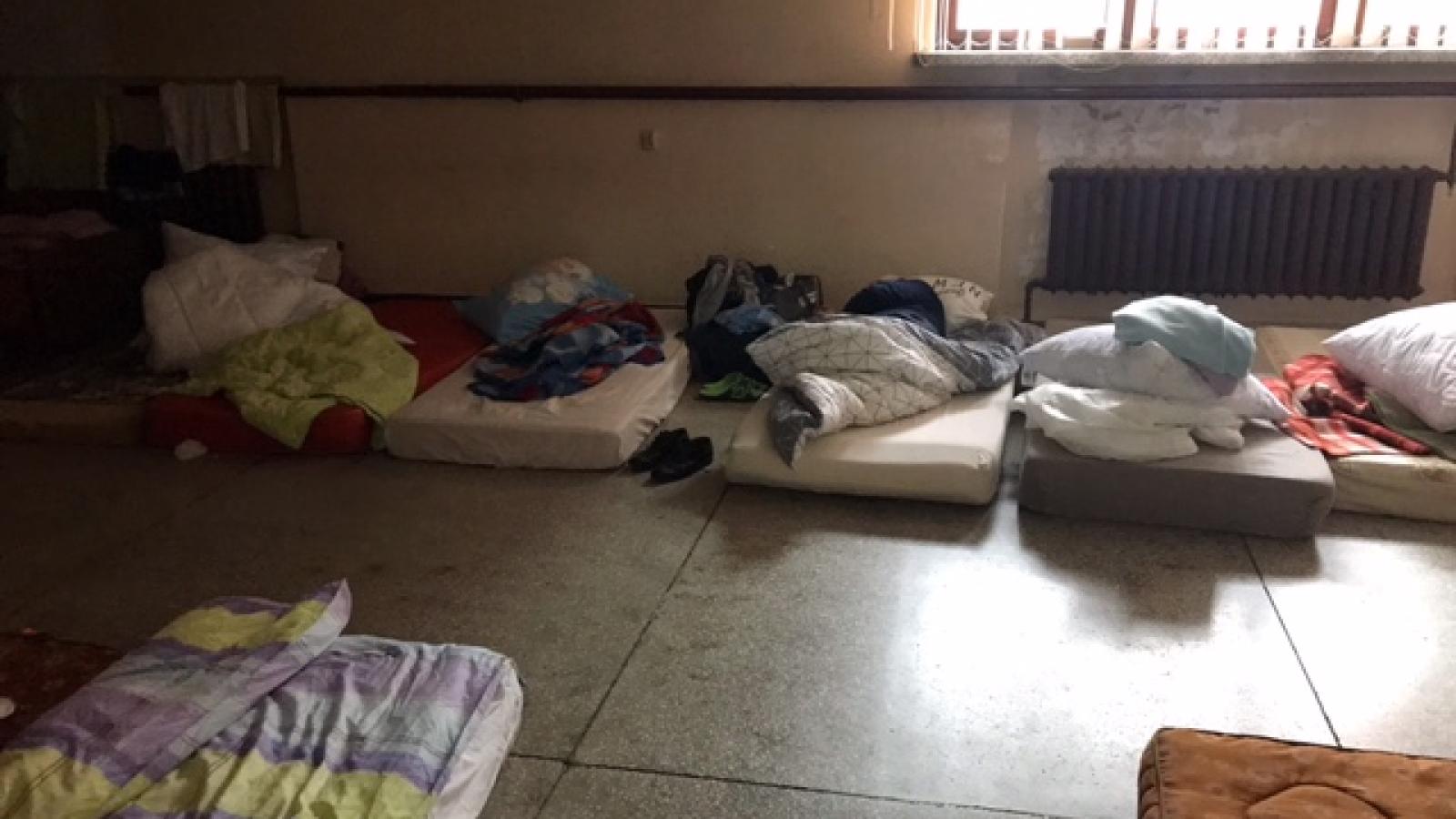 “We haven’t refugee camps. We do not plan to build a refugees camp [sic]. We of course have the refugee centers, but it’s only for two weeks,” the pastor said, explaining that Ukrainians stay in his church briefly before his network helps them find permanent places to go in Europe. He was skeptical of another wave of refugees entering Poland and cited the localization of the conflict in the East and South of Ukraine. “War is terrible, but the war is stabilizing,” he observed.

Skrzypkowski said relief drivers stop by the church before heading to the border to pick up refugees and bring them back to western countries. “They just come and try to find people,” he asserted, noting he couldn’t place a figure on the number of foreign volunteers because it changed “every day and every hour.”

Among the longer serving of these volunteers is Alwyn Walker of Northern Ireland, who works in the church warehouse packing pallets with supplies to go to Ukraine, an effort which has gained steam through the #donateapallet campaign. Walker told Just the News his decision to come to Poland stemmed from “obsessive” news watching, adding “I just thought this is feeling wrong to just watch it and do nothing.” 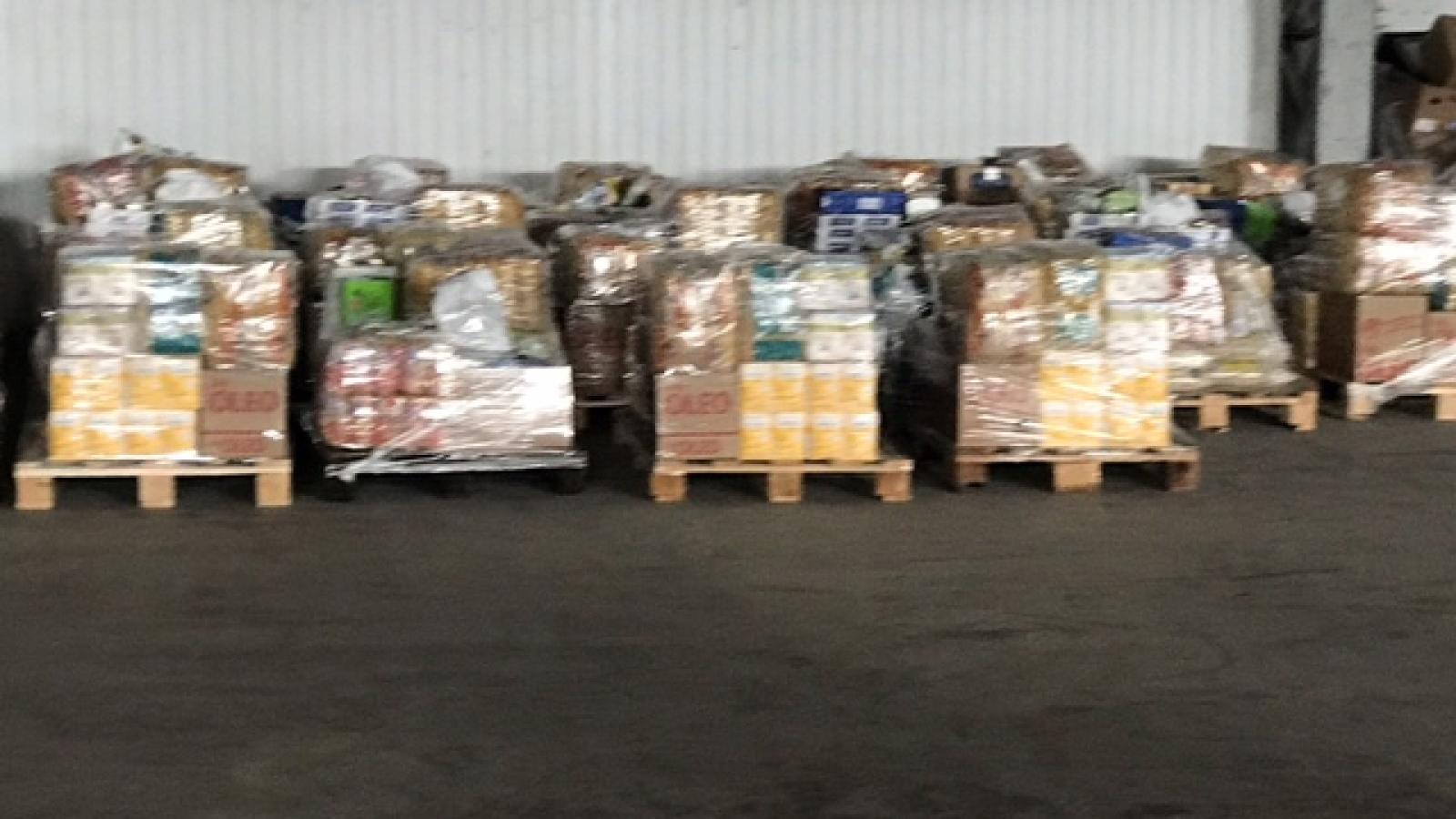 Stacked pallets in the warehouse
Ben Whedon/Just the News

Alwyn had a contact through a local church that put him in touch with people in Chełm. With space to house volunteers and a warehouse effort for which fluency in Polish or Ukrainian is not required, the opportunity seemed ideal. “I didn’t even bother doing more research after that,” he said.

Though Walker relayed that Ukrainians need food the most, he identified financial contributions as the best way for western supporters to help the effort, citing the difficulty of moving food shipments across Europe and suggesting bulk purchases were best made closer to the border. “Even though it doesn’t sit well with a lot of people across Europe and America, the reality is that financial donations are by far the best.”

“But that’s why I volunteer at the church,” he added, “because despite not being religious at all, in fact I’m an atheist, I’ve worked with churches for years and I know I trust them more than any other organizations to manage the money.”

When asked about the fundraising efforts for the operation, Skrzypkowski replied jovially that “I have a very rich bank in heaven.” He then asserted he has not ever had to ask for money and that it has all come unsolicited from supporters. Funding has even come from ecumenical sources. Skrzypkowski noted he had received support from the Polish Catholic Church, including the local priests and the Bishop of Lublin, the region’s highest-ranking cleric.

Adding to the plethora of international volunteers are the Texas Baptist Men who sent relief teams to the church within days of the invasion’s start. “Currently we have four teams coming, and they serve for two weeks with two days overlap, one to train the next,” said Robert Watson, the group’s on-site coordinator. “Each team is about ten people,” he noted.

“We’ve basically been doing whatever we can to help. The ladies are washing clothes, they’re cleaning the floors, getting the church ready for the service on Sunday, make sure everything is clean,” Watson noted. “The men in the warehouse pack the pallets, they load them on trucks they send them wherever they’re gonna go.”

Watson observed the work varies day by day based on the church’s needs. “We’ve helped carry some of the Ukrainian refugees to different cities to get rides to wherever they’re gonna live. We’ve fixed shower heads; I’ve done just about everything you can think of,” he added.

The Texan missionary highlighted the role faith has played for his group in connecting with the other volunteers and the refugees. “I’ve worked a number of disasters… This one is very unique in that respect. You see, men of God being obedient to his call,” he said. “This infusion of the Holy Spirit… adds this synergy that has allowed us all to do more than any of us could do by ourselves.”

While English speakers make up a large portion of the foreign volunteers, there are few people able to interpret between them and the refugees.

Having lived in France and being used to dealing with people of other nationalities, Walker insisted the language barrier was not a problem, but jested “It’s easier for me than for the Americans because the Americans, generally speaking, they only speak Texan.”

Watson, however, suggested the Texans were getting by, saying “It’s amazing how God has worked. Two Americans took ten Ukrainians to meet three Portuguese and one Spaniard so they could take them to Munich, Germany. So, language has been a challenge but Google Translate has helped us quite a bit. You know, a smile goes a long way. A smile, a handshake. It’s universal.”

“It’s just been an amazing opportunity for a Christian to see the broader Christian community come together in unity with one focus and that’s serving the Ukrainian people as best we can, whatever we can, and doing it in the name of Jesus,” he added.

Apart from the many foreign volunteers, some Ukrainians have flocked to the church to aid their countrymen. Among the refugees staying at the church is Edita Karamalak, 16, of Odesa. Edita spoke to Just the News in English and was a teacher for kids while in Ukraine.

Edita, her parents, and three younger brothers fled Odesa early in the war and sought refuge in Poland. “We have a friend who lives here in Poland. We came to our friend, and they said that here [the church],” she said of their arrival in Chełm.

Rather than stop briefly before moving on, the Karamalak family has stayed behind at the border to help other Ukrainians adjust to Poland. At the time of the interview, she and her family had stayed at the church for three weeks. “We stay here, and serve here, and are living here,” Karamalak added.

As with many people from the South and East of Ukraine, Edita’s first language is Russian. Asked if the language barrier created issues, Edita indicated it presented little problem for her, specifically. “No, I learned Polish, and I have many, many languages. English, Ukrainian, Russian, Polish,” she said. Edita has acted as one of the few interpreters between the refugees, parishioners, and foreign volunteers at the church.

Most of the refugees who arrive in Chełm don’t know each other beforehand, coming from many parts of the war-torn country. Karamalak, however, said the Ukrainians have quickly bonded with one another. “We connect and we speak, I speak with them. We are friends,” she explained.

Her family plans to soon move on to Warsaw to help the relief efforts in the capital but they will return to Chełm later on, Karamalak stated. She did, however, tell Just the News that she hoped her time in Poland would come to an end.

“I want to go back," she lamented.

The Russian invasion of Ukraine began on Feb. 24.