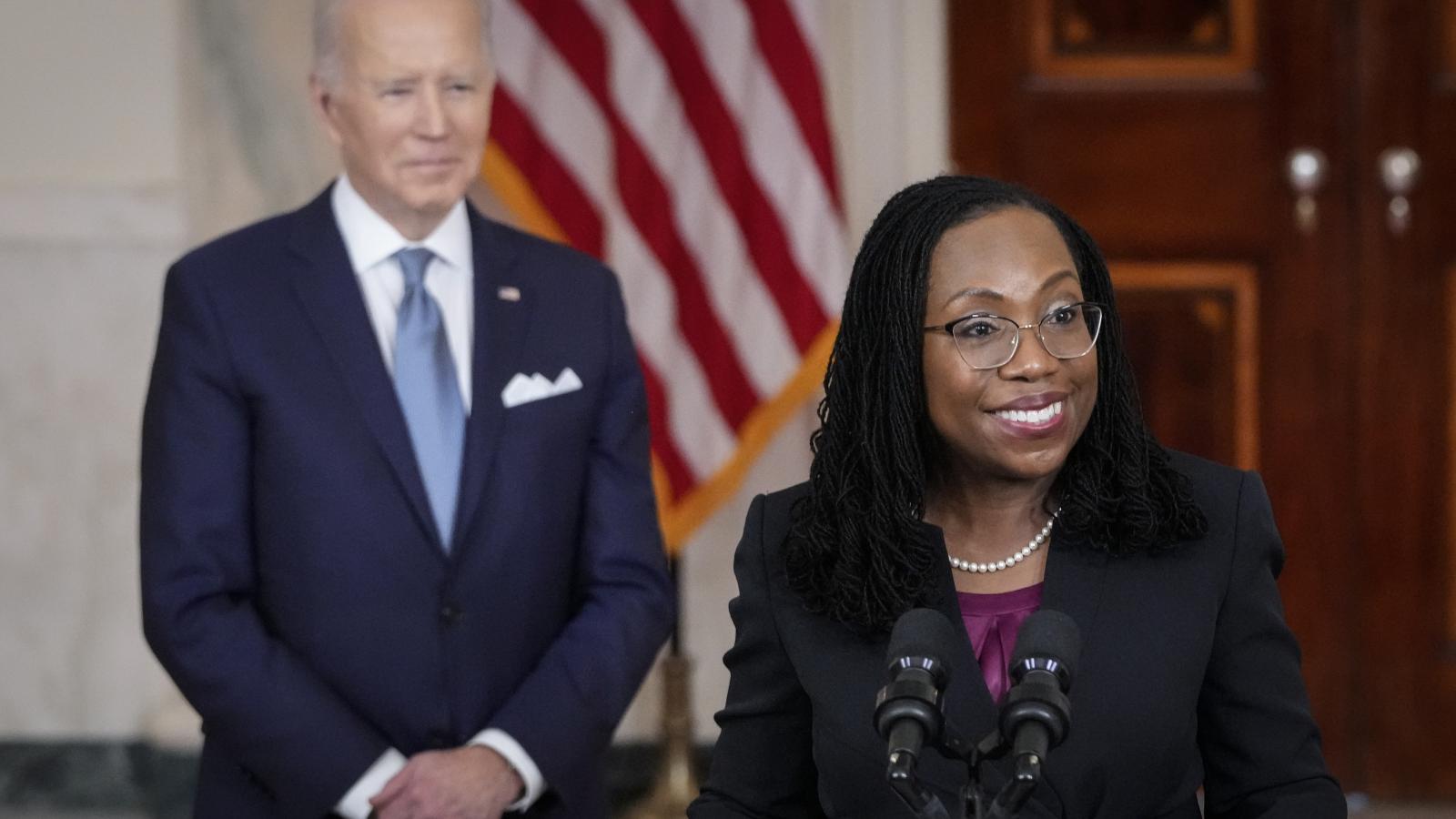 President Biden's nominee for the Supreme Court represented suspected terrorists when she was a federal public defender, going well beyond a bare-bones defense to lambaste the U.S. government for some if its counterterrorism policies and broader approach to the War on Terror.

Biden on Friday nominated Ketanji Brown Jackson, currently a federal judge on the U.S. Court of Appeals for the District of Columbia Circuit, to replace retiring Justice Stephen Breyer on the Supreme Court.

Jackson's record will no doubt be heavily scrutinized in the coming days as the Senate prepares for its confirmation hearings. Perhaps no aspect of her past legal work will come under more scrutiny than her advocacy on behalf of prisoners detained at the Guantanamo Bay military prison as enemy combatants for their alleged role in terrorist activities.

During her time in the federal public defender's office, Jackson represented Guantanamo detainees who challenged their imprisonment in a federal court in Washington, D.C.

One of the most prominent cases involved Jackson representing Khiali-Gul, who the Defense Department said was a Taliban intelligence officer in charge of a terrorist cell planning to attack a U.S. base in Afghanistan in 2002. He may have also met with Osama bin Laden in November 2001, according to government documents.

The Defense Department assessed that if released Gul would immediately "seek out prior associates and reengage in hostilities and extremist support activities."

Gul said he was innocent, claiming he had a job in the Afghan government and helped Americans.

During Jackson's confirmation hearings for her current position last year and to be a judge on the U.S. District Court for the District of Columbia in 2012, Republican senators grilled the nominee on her work for Guantanamo Bay detainees. Jackson, whose brother served in Iraq, responded she was just doing her job and public duty.

"In all of those situations, the views that were expressed were the views of my clients that I represented them in that capacity, and the briefs did not necessarily represent my personal views with regard to the War on Terror or anything else," she said in 2012.

Nine years later, as part of her appeals court confirmation process, Jackson told the Senate Judiciary Committee that she was "keenly and personally mindful of the tragic and deplorable circumstances that gave rise to the U.S. government's apprehension and detention of the persons who were secured at Guantanamo Bay."

However, in the Gul case, Jackson went beyond simply defending her client against terrorism charges and attacked the conduct of the U.S. government, accusing it of torturing prisoners while condemning the George W. Bush administration's War on Terror policies.

For example, Jackson claimed Gul was treated inhumanely at Guantanamo, arguing the military treated Guantanamo detainees the same as prisoners at the Abu Ghraib prison in Iraq, where U.S. government personnel abused and humiliated some of the inmates.

"Many of the most egregious interrogation techniques used in the Abu Ghraib detention center and other detention facilities in Iraq — such as the use of aggressive dogs to intimidate detainees, sexual humiliation, stress positions, and sensory deprivation — were pioneered at Guantanamo," Jackson wrote in a petition she filed in 2005 on Gul's behalf.

However, as the Washington Free Beacon noted, a Pentagon inspector general report from 2005 rejected that assessment, as did Vice Admiral Albert Church in testimony before the Senate Armed Services Committee.

Debra Burlingame, an activist and former lawyer whose brother was the pilot of American Airlines Flight 77, the plane that was hijacked and crashed into the Pentagon on 9/11, told Just the News that in a February 2009 meeting, then-President Obama admitted to her and other terrorism victims' families present that the public had conflated Abu Ghraib and Guantanamo, acknowledging prisoners at the latter were treated well.

"I don't have an issue with a federal defender taking on a particular case," said Burlingame. "My problem is with the zealotry of accusing the government of things it did not do ... She's really accusing our own troops of doing heinous things at Guantanamo that never happened."

While defending Gul, Jackson also accused government lawyers of ethical breaches, and in 2006 she asked the judge presiding over the case to sanction Justice Department attorneys over the government's response to detainee suicides.

In June 2006, three Guantanamo detainees committed suicide by hanging themselves in their cells. The suicides came shortly after an uprising in which prisoners attacked guards with fan blades and broken light fixtures. Rear Admiral Harry Harris, who commanded Guantanamo at the time, called the suicides a coordinated protest.

The Naval Criminal Investigative Service (NCIS) investigated the suicides, fearing more would come or inmates would attack Guantanamo guards. In the process of probing a potential conspiracy, the NCIS seized personal papers from some detainees, including Gul, some of which were legal materials protected by attorney-client privilege.

The government asked the D.C. federal court to separate the protected legal papers from documents relevant to the NCIS investigation.

Jackson accused the government of violating detainees' rights and suggested it tried to hide the seizure from the court. She asked a federal judge to impose sanctions.

In response, Justice Department lawyers wrote, "Petitioners' filings reflect a penchant for ignoring or dismissing as lies any fact or matter inconsistent with a preconceived 'torture narrative' concerning Guantanamo."

The judge rejected Jackson's request for sanctions and said the NCIS acted appropriately.

Ultimately, Gul was repatriated to his native Afghanistan in 2014. It's unclear whether he returned to extremism as the Pentagon warned he would if released from Guantanamo.

When Jackson left the government for private practice in 2007, she continued to advocate on behalf of Guantanamo detainees.

In 2008, Jackson was a lawyer at Morrison & Foerster and got involved in the highly controversial Supreme Court case, Boumediene v. Bush, which had profound legal implications for the War on Terror.

"Do we treat terrorism with a war paradigm of justice or a criminal paradigm: Do we treat terrorists like war criminals or bank robbers?" That, according to Burlingame, was the central question of the case, in which Guantanamo detainees asserted a constitutional right to challenge their imprisonment in federal court.

The Supreme Court chose bank robbers: In a 5-4 decision, the court ruled that Guantanamo prisoners had a right to the writ of habeus corpus under the U.S. Constitution.

Jackson and two other lawyers filed an amicus brief on behalf of retired federal judges who backed the Guantanamo prisoners. In the brief, Jackson argued that some decisions to detain individuals were based on statements extracted under torture and that efforts by the U.S. government to review these decisions weren't sufficient to stop the problem.

If Jackson is confirmed, said Burlingame, "she'd be sitting on the highest court in the land after advocating in an amicus brief to overturn [centuries] of Anglo-American jurisprudence" by trying foreign terrorists captured on the battlefield under the "gold standard of justice: federal courts."

The higher standard of proof in federal courts makes it tougher for prosecutors to convict suspected terrorists. In 2010, for example, Ahmed Khalfan Ghailani was acquitted of all but one of the 285 charges of murder and conspiracy against him for the 1998 U.S. Embassy bombings in Kenya and Tanzania that killed 224 people, including several Americans. It was the first case of a former Guantanamo detainee tried in civilian court.

"These are enemy combatants," continued Burlingame, who were "picked up off the battlefield where we have U.S. and coalition troops fighting. Some of them were picked up fighting with AK-47s still smoking in their hands, and they were brought to Guantanamo."

Burlingame added these suspected terrorists' only connection to America is "it's the home of people they murdered or conspired to murder," noting Guantanamo prisoners weren't born or detained on U.S. soil but were engaged in acts of war and terrorism against the U.S.

"In terms of her jurisprudence, that was a political decision she made" in Boumediene.

Bernard Kerik, former commissioner of the New York Police Department, echoed the notion that Jackson is political and criticized her past advocacy for Guantanamo prisoners.

"By all accounts, this is a far-left-leaning judge, somebody we don't need on the bench," he told Just the News. Jackson "criticized the War on Terror, people in the military. We can't have somebody like that going on the Supreme Court. The fact that Biden put her up is terrible but in line with what he's doing by pushing far-left radicalism."

"We need someone who is a fair jurist, who is objective to say the least," he added.