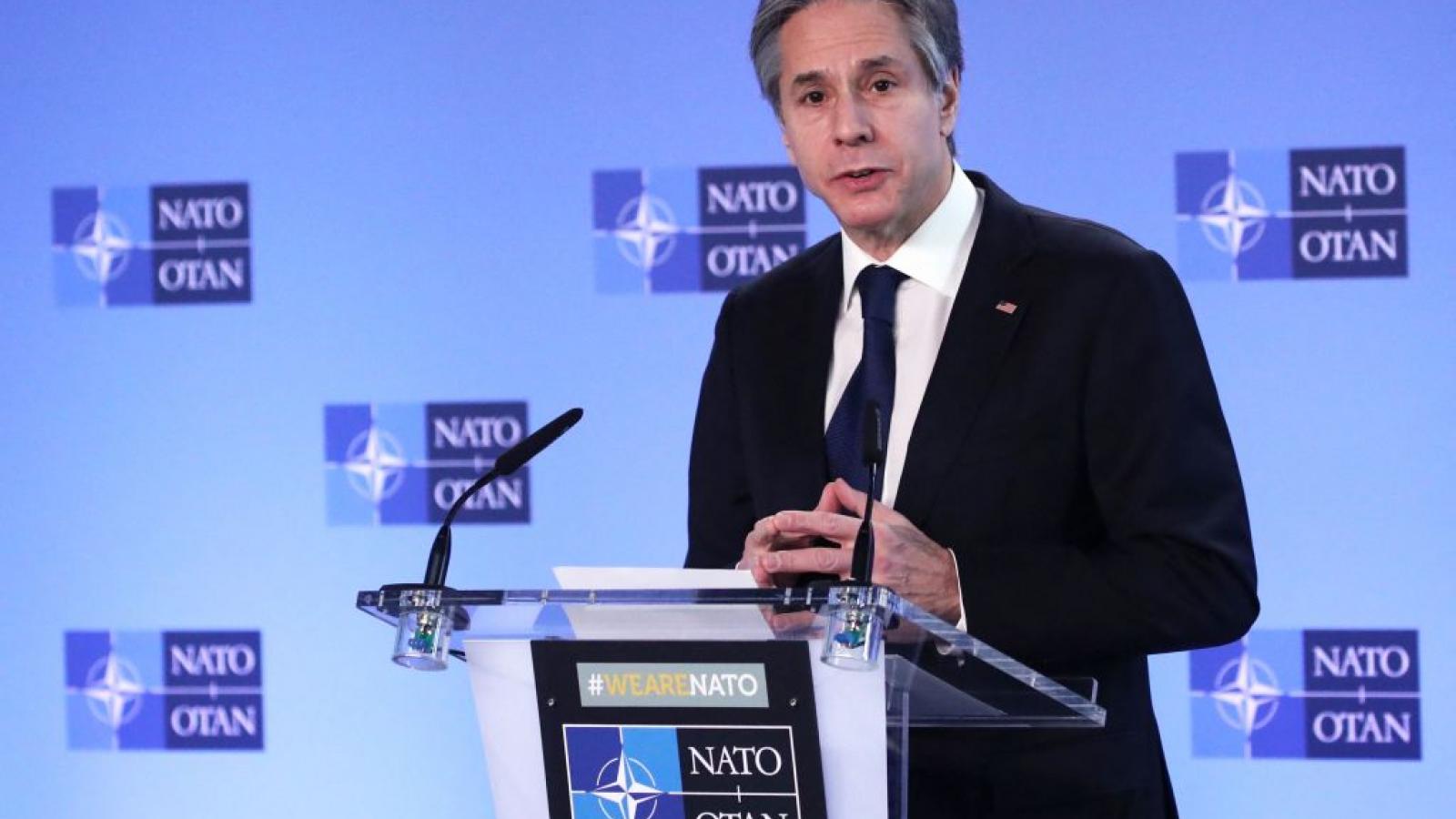 International friction emerged as a key theme among world officials who met this week in blocs to solidify partnerships and alignments on an increasingly fractious global stage.

In the West, U.S. Secretary of State Antony Blinken on Tuesday began a two-day meeting in Brussels with foreign ministers of NATO countries. In the East, Chinese Foreign Minister Wang Yi convened in Guilin with his Russian equivalent, Sergey Lavrov.

In Brussels, NATO Secretary General Jens Stoltenberg opened the ministerial sessions with a direct reference to challenges that face both Europe and the United States.

"As long as we stand together, we can deal with both a rising China and an assertive and aggressive Russia," Stoltenberg said.

The State Department on Tuesday affirmed that view.

"The meetings are meant to underscore the United States' determination to strengthen and revitalize ties with NATO Allies," said spokesperson Ned Price, who noted that discussions in Brussels included "concern over Russia and China's malign activity and disinformation efforts as well as arms control and regional security matters."

Across the globe in Guilin, the Chinese and Russian ministers presented their vision of a new international dynamic, with Beijing as a force for protecting world order.

"We should act as guarantors of justice in international affairs," said China's Wang Yi. "China is ready to promote the international system established by the United Nations, protect the world order based on international law, and abide by universal values such as peace, development, justice, democracy, equality and freedom."

Lavrov, for his part, declared that Russia and the European Union no longer are speaking to one another.

"There are no relations with the EU as an organization," Lavrov said. "The entire infrastructure of these relations has been destroyed by unilateral decisions made from Brussels."

Lavrov threatened to break off diplomatic contacts with offending nations. "Of course, we do not want to isolate ourselves from living in the world, but we must be ready for this," he said. "If you want peace, prepare for war."

The parallel meetings of the ministers took place against a backdrop of sanctions and counter-sanctions. Western governments have censured China for its treatment of the ethnic Uyghur Muslim minority, and Russia in part for detaining opposition figure Alexey Navalny.

Amid the measures and retaliations, China sanctioned 10 Europeans, including politicians and scholars from the Netherlands, Sweden, and elsewhere. Germany and Lithuania summoned their Chinese ambassadors.

Blinken in Brussels affirmed his own plan for enacting Biden administration policies.

"We will stand resolutely against Russian aggression and other actions that try to undermine our alliance, and I think that approach is exactly where NATO is as well," Blinken said March 23. "And similarly, we have to and we will, I believe, make sure that NATO is also focused on some of the challenges that China poses to the rules-based international order."

Ministerial talks in NATO will continue through Wednesday. The summit is Blinken's first official visit to Europe as secretary of state.

The two blocs' meetings were held in the wake of a high-profile spat between U.S. President Joe Biden and Russian President Vladimir Putin, after Biden on television said that his Russian counterpart is a "killer."