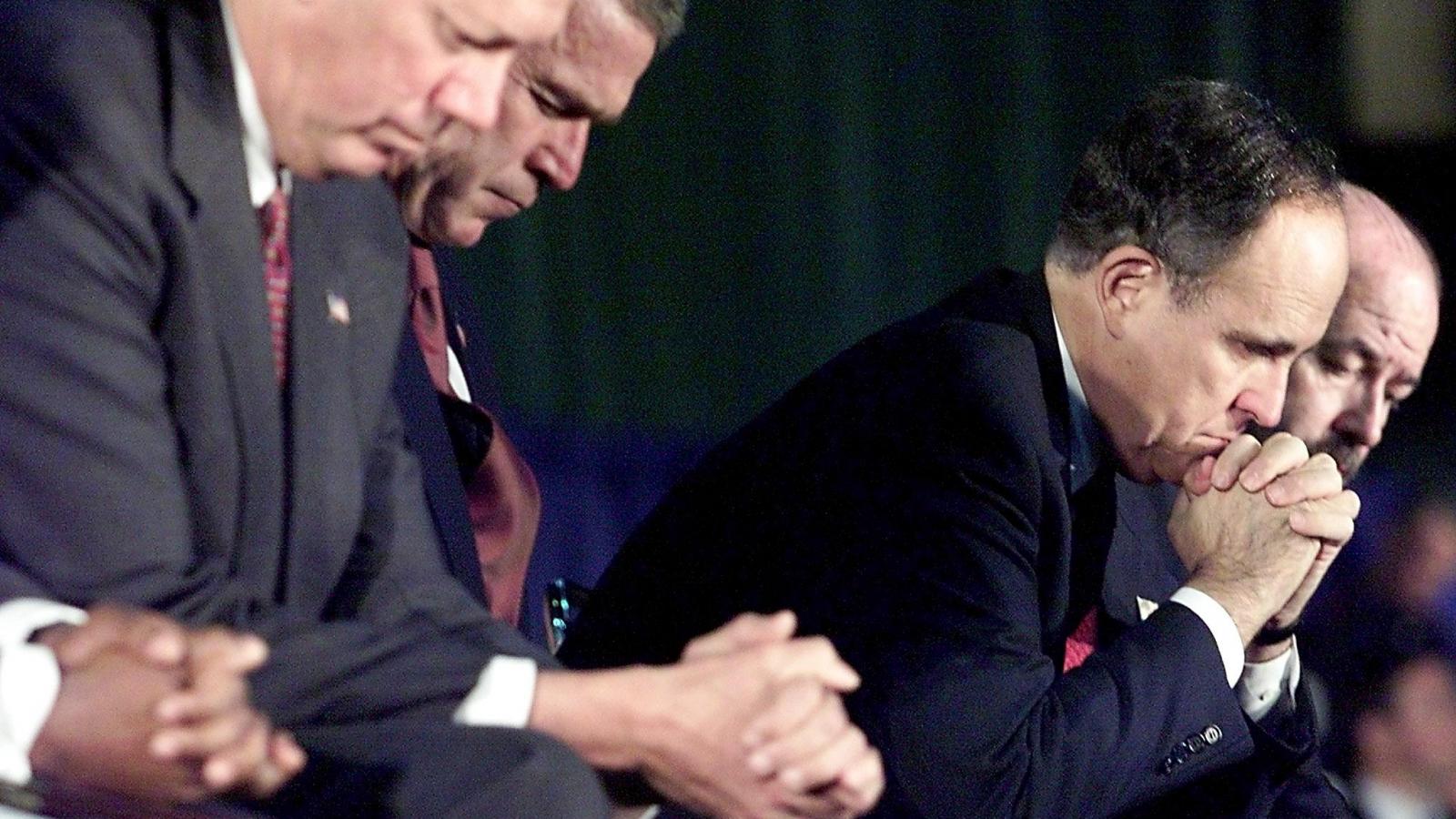 ​Now relegated to the history files of the New York's police department, a September 2001 after-action report prepared by then-NYPD Commissioner Bernard Kerik for then-Mayor Rudolph Giuliani provides a stunning account of what happened on the deadliest day in American history as four hijacked planes pierced the sunny, blue morning skies 20 years ago.

Nineteen terrorists — working under the command of Osama bin Laden (since executed by the U.S. military) and his chief planner Khalid Sheikh Mohammad (since captured and on trial now at Guantanamo Bay) — exacted unspeakable carnage on an unsuspecting country that was forever changed.

The report, provided by Kerik to Just the News as part of its "9/11: Never Forget" podcast special, details how the NYPD executed "Condition Omega," an emergency plan that achieved an unprecedented sealing of the Big Apple, an historic evacuation of hundreds of thousands from the city's financial district and a grim, gruesome recovery of more than 2,500 bodies, including hundreds of police officers and firefighters who rushed into the burning Twin Towers of the World Trade Center and its adjoining command center.

"Emergency response was immediate and massive," the memo recounted as a full command center was stood up in less than an hour from the first strike of the jetliner. "The NYPD was placed on Condition Omega; existing duty charts were suspended with uniformed personnel performing 12-hour tours of duty with regular days off suspended."

For the first time in history, the entirety of America's largest city was sealed to incoming and outbound traffic, the memo noted.

"With the exception of emergency vehicles, the Brooklyn Battery and Lincoln Tunnels, and all bridges to Manhattan were closed to non-emergency traffic as an intricate system of restricted access lanes on major thoroughfares and highway escorts was quickly put into place to expedite the arrival of emergency vehicles, equipment, and personnel," the memo noted.

You can read the full memo here:

Police officers and firefighters continued in their unwavering rescue and recovery efforts for two-plus weeks even while mourning the loss of countless colleagues, from street cops and commanders to a beloved chaplain. The memo noted the funerals of some of the higher-ranking victims.

In an interview with the John Solomon Reports podcast, Kerik recounted to Just the News how he and Giuliani got to the scene, went to the command center and met with the firefighting leadership, including First Deputy Commissioner William Feehan, Chief of Department Peter Ganci, Chief of Special Operations Ray Downey, and the Rev. Mychal Judge, a Catholic chaplain.

"Fifteen minutes after the mayor got to the scene, we walked down to West Street, where they had a temporary command post," Kerik recalled. "And Ganci and Downey and Father Judge were all there. We spoke to them. They gave us the insight on what they thought was going to happen. We knew that we would lose the top of the buildings, everything on top of the impact zone, you know, bodies and buildings. You know, we knew all that. They gave us their briefing.

"And when we were walking away Father Judge grabbed Mayor Giuliani, and he made the sign of the cross over his head, and he said, 'God bless you. ... Go in peace. And please be careful.' And we walked away. And I don't know, 30 minutes later, Tower 2 imploded. And when it did, every single one of those men that we had just left — we just left them — they all perished."

Still, the mission went on.

Written on Sept. 27, 2001 — or 16 days after the terror attacks — the memo is a poignant reminder how long it took to understand the magnitude of the attacks and who was behind it.

The attackers, led by an Al-Qaeda lieutenant named Mohammad Atta, were still referred to in the memo as "yet unidentified terrorists," and the memo said the "known death toll" at the World Trade Center was reported at 305. It eventually rose months later to a final tally of 2,606.

All told 2,977 people died in the four planes, the World Trade Center, the Pentagon in Washington and in the crash field in Shanksville, Pa.

While the memo's death count was far short of the final tally, the macabre task ahead was laid bare by Kerik's report.

"Missing members of the NYPD number 23, representing 14 commands," it noted. "There are 4,007 unidentified pieces of human remains and 8,786 individuals reporting injuries of varying severity, including 1,182 members of the NYPD." In the dust and debris of the smoldering collapsed towers, evidence teams recovered 5,049 personal items and 7,728 samples of human tissues, the memo noted matter of factly.

The NYPD and NYFD response was supplemented by a rapid deployment of federal and National Guard troops, including an entire Navy USS George Washington carrier group to protect the city from further attack and a naval hospital ship docked at the now famous Pier 92.

A shellshocked city remained on jitters: 92 calls reporting possible terror attacks were reported in the first 15 hours after the plane struck, and "863 bomb threats were called into 911" in the first two weeks of the tragedy.

The rapid demands for vengeance and justice for the Al-Qaeda perpetrators were mentioned throughout Kerik's 10-page report.

The memo noted that the New York Legislature acted without haste and Gov. George Pataki signed into law "five new sections to the New York State penal law and one to the New State Criminal Procedure Law to address terrorist related activity."

Even spitting on a sidewalk by a suspected terrorist would be punished, as FBI Director Robert Mueller famously joked.

The memo recounts the momentous visit of President George W. Bush to NYC, where he stood atop a smoldering pile of debris with a bullhorn to assure America the Al-Qaeda terrorists would be brought to justice. Recorded also are the endless visits of world leaders, members of Congress and other mourners.

As Bush was leaving the city, he made Giuliani and the NYPD commissioner a promise.

"So on the night of Oct. 7, right, I was leaving my house. I was on the way to Yankee Stadium to meet with the mayor. And I got a phone call from the mayor. He called me from the car. And I answered the phone. And he said, 'It's happening.' Two words. And I didn't know what he was talking about. He says the president just called me. And he said to call you and make sure I told you that it's happening. And I knew then that we were going into Afghanistan."

Kerik's memo captured also the remarkable spirit of unity that pervaded America in the days and weeks after 9/11, one that is now a distant memory in a country bitterly divided on everything from elections and abortion to police defunding and pandemic masks.

Kerik recounted ceremonies of healing and unity from St. Patrick's Cathedral in Manhattan to Yankees Stadium in the Bronx. And on its closing page, the memo noted a remarkable blue surge in the Big Apple.

"The Department of Citywide Administrative Services indicates as of yesterday September 26, 11,169 individuals have filed for the Open Competitive Exam for police officer," he noted.Public grief. Public unity. Public service. Three byproducts of the deadliest terror attack in world history captured in a single memo.

On this, the 20th anniversary of the 9/11 attacks, much of those byproducts have long since yielded to a new era of political bitterness and division in America. The question now is for how long and with what consequence?