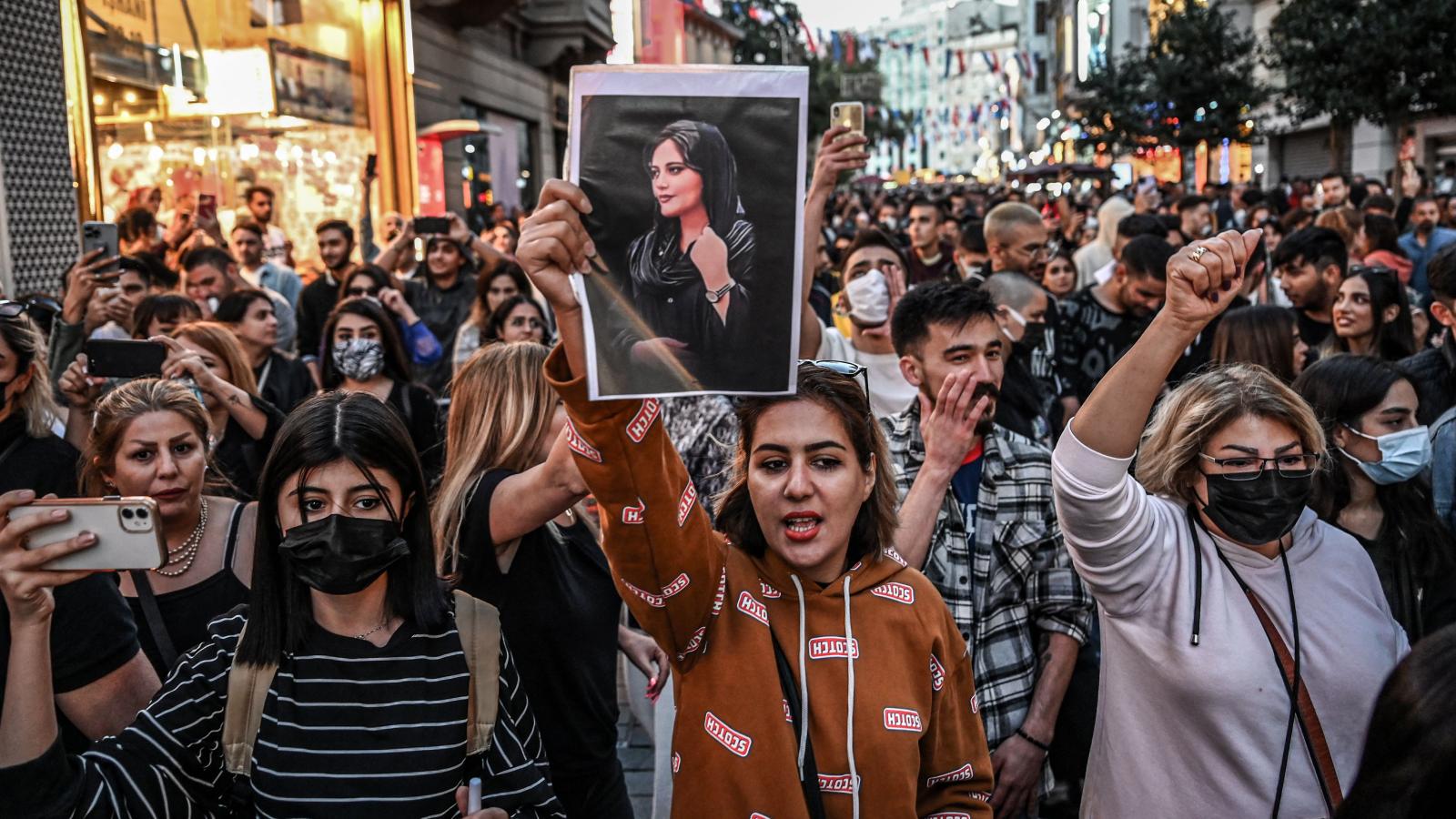 A protester holds a portrait of Mahsa Amini during a demonstration in support of Amini, a young Iranian woman who died after being arrested in Tehran by the Islamic Republic's morality police, on Istiklal avenue in Istanbul on September 20, 2022.
Ozan Kose / AFP via Getty Images
By Aaron Kliegman

The Biden administration's recent efforts to declare support for ongoing anti-government protests inside Iran and to impose sanctions on those involved in the Iranian regime's crackdown haven't deterred Tehran from escalating its violence against demonstrators.

Meanwhile, amid a seemingly tougher posture from Washington toward Iran, the regime has nonetheless continued to ramp up its illicit nuclear activity and continue targeting U.S. and allied citizens with alleged kidnapping and assassination plots.

After receiving widespread criticism for what some experts called its "weak and baffling" response to widespread protests in Iran, the Biden administration did a 180 over the past month, expressing support for the Iranian people demonstrating against their theocratic government and taking limited steps to support them. The administration even signaled for the first time it's not pushing to reach a nuclear deal with Iran, instead prioritizing the protests.

However, the reversal has appeared to have little impact on the regime's crackdown, leading critics to call for more concrete support for the Iranian people.

Iran on Wednesday sentenced three more protesters to death, raising fears that the regime will use executions to intimidate Iranians in order to suppress the demonstrations.

That brings the number of people sentenced to death in connection with the protests to five, according to Iran's judiciary. However, many more imprisoned demonstrators may face similar punishments. There have been at least 30,000 detentions, according to figures compiled by the organized Iranian opposition.

The death sentences are the latest escalation in a regime crackdown that has contributed to hundreds of estimated deaths, leading some observers to chastise the Biden administration for not doing more.

"I'm not surprised that the Biden administration has been more of an appeasement administration when it comes to the [leaders] in Tehran, because that's what they've always been," Bryan Leib, executive director of Iranian Americans for Liberty, told the John Solomon Reports podcast on Thursday. "They never wanted to have gotten tough with this regime."

Leib went on to describe the current protests sweeping Iran as a potential "revolution" led by young people and especially women.

"There's an opportunity right now for the Biden administration to grow a spine and really do something to support the Iranian people," he said. "And I'm not talking about putting out statements. I'm not talking about sending out tweets. I'm talking about enacting the stiffest and toughest sanctions ever heard of before on the Islamic Republic and also getting our European allies to do the same thing. The time is now for this administration to take a strong stance against the regime. I don't think they're going to, but they should. They really should."

In 2020, when the Trump administration was in office and implemented a policy of exerting maximum economic pressure on Iran, the country plummeted to a low of $4 billion in accessible foreign exchange reserves. That figure climbed up to $41.4 billion as of August.

While increasing support for the protesters, U.S. officials have seemed unwilling, according to Leib, to describe the demonstrations as a movement for democracy and to overthrow the regime, instead saying the Iranian people only want their government to institute reforms.

Both State Department spokesperson Ned Price and Biden's special envoy for Iran, Robert Malley, angered Iranians on social media for recently saying the protesters are calling for reforms and demanding respect for their dignity rather than regime change.

"How tone deaf can our U.S. officials be?" asked Leib. "When Iranians are on the streets burning down billboards of [Iranian leaders], setting statues ... on fire and chanting 'death to the dictator,' how was that calling for reforms? That's not calling for reforms; that's calling for a completely new government."

The protests have led several House Democrats, most strongly supportive of Biden's Iran policy, to call publicly for additional punitive action against Iran. On Wednesday, 17 Democrats on the House Foreign Affairs Committee issued a joint statement urging the U.S. and its allies to "maintain pressure" on Iran in response to the regime's ongoing crackdown against protesters.

Beyond its crackdown, Iran appears undeterred in its efforts to target U.S. and allied citizens.

The Democrats' letter came two days after Secretary of Homeland Security Alejandro Mayorkas testified to lawmakers that, "given its capabilities, Iran could advance an attack plot targeted at the United States with little to no warning."

A day earlier, the Associated Press reported that the State Department had notified Congress that Iranian threats against former Secretary of State Mike Pompeo and former Iran envoy Brian Hook — both of whom served in the Trump administration — were still "serious and credible."

Meanwhile, the Iranian agent charged in August with plotting to murder former Trump White House National Security Advisor John Bolton was also named this week in a plot to kill an Israeli businessman in the country of Georgia. Iran reportedly hired a Pakistani hit team to gather intelligence on the target.

Iran has also tried to kill or kidnap at least 10 British citizens or U.K.-based individuals deemed threats to the regime, the head of Britain's domestic spy agency said Wednesday.

Beyond alleged assassinations, Iran has been widely lambasted for supplying Russia with drones to attack Ukraine.

Iran has also been on the march on the nuclear front, ramping up its nuclear program to the point where its breakout time to have enough fuel for a nuclear weapon is "zero," according to experts at the Institute for Science and International Security.

Iran has refused to cooperate with a probe by the United Nations' nuclear watchdog, the International Atomic Energy Agency (IAEA), into traces of uranium found at three sites not declared by the Iranian government. Iran's stonewalling earned it a formal censure on Thursday by the IAEA Board of Governors, which could lay the groundwork for possibly referring Iran to the U.N. Security Council for failing to fulfill its nuclear obligations under the 2015 nuclear deal.

Talks have been stalled between the U.S. and Iran to negotiate a revamped version of the deal, which places temporary curbs on Iran's nuclear program in exchange for giving Iran access to $274 billion in its first year and at least $1 trillion by 2030 through sanctions relief, according to figures calculated by the Foundation for Defense of Democracies.

Nuclear negotiations are currently "not on the agenda," a spokesman for the White House National Security Council told the Washington Free Beacon this week.

However, Malley has left the door open to talks, reportedly saying he would only resume "when and if" Iran stops killing protesters and providing Russia with drones used to attack Ukrainians.

It's unclear whether the administration has effectively killed the nuclear deal or is just taking an indefinite pause, hoping things will change in order to return to negotiations. The State Department and the National Security Council didn't immediately respond to requests for comment for this story.