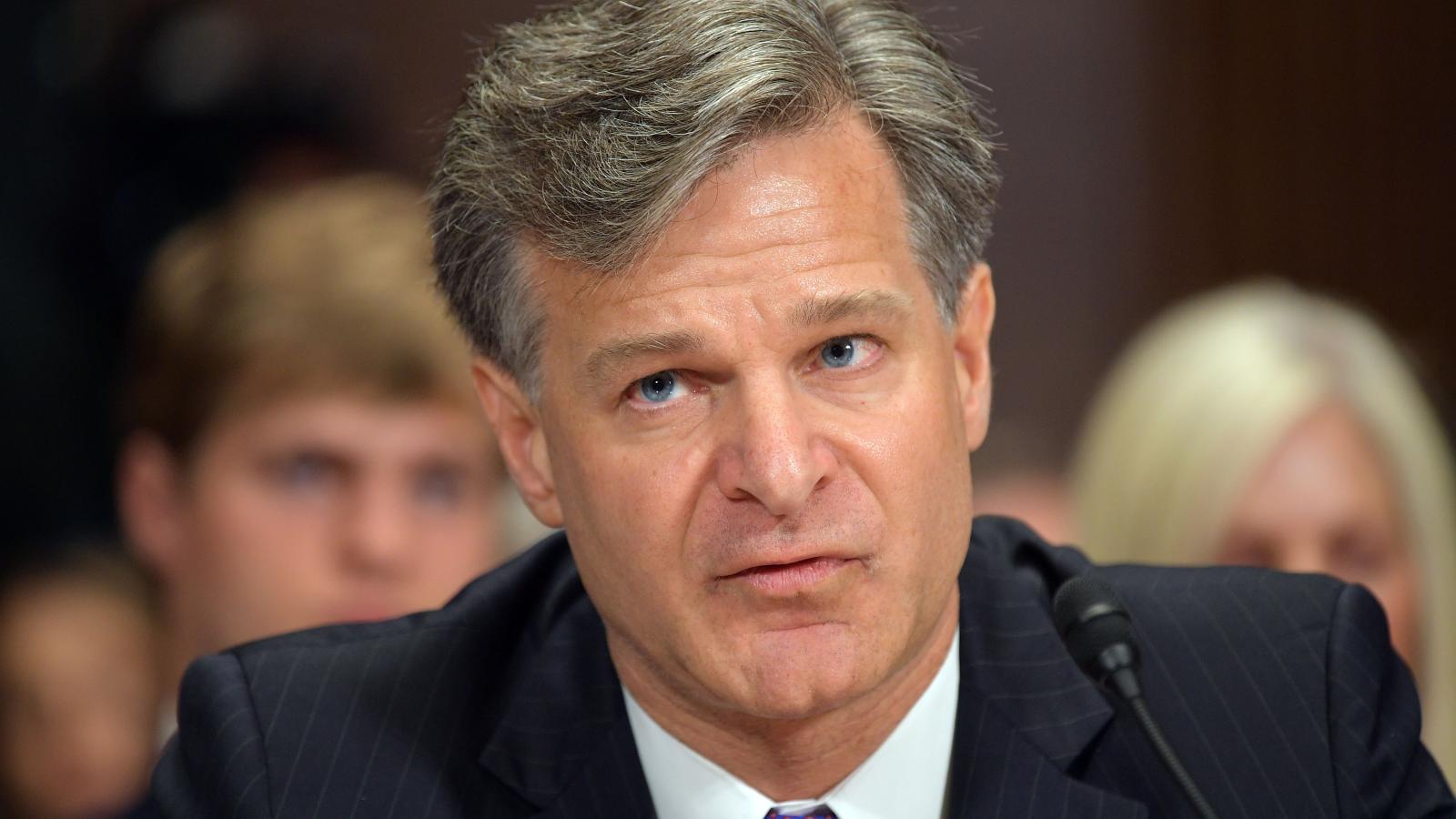 FBI Director Christopher Wray's assessment that the far-left antifa network is an ideology, not a group or an organization, is coming under fire this week after prosecutors in San Diego charged several self-described anti-fascists in connection with eight alleged assaults.

Antifa is "not a group or an organization," Wray testified before the House Homeland Security Committee last year. "It's a movement or an ideology."

He added that antifa was a "real thing" and that the FBI had undertaken "any number of properly predicated investigations into what we would describe as violent anarchist extremists."

Less than two weeks later, President Biden, then a candidate, referenced Wray's comments at a debate with President Trump. Biden argued that Wray "said unlike white supremacists, antifa is an idea, not an organization ... not a militia."

Critics are now speaking out against Wray's description and the FBI's approach to antifa following the arraignment of at least seven antifa militants earlier this week.

Those arraigned in San Diego Superior Court were part of a group arrested last Thursday in raids conducted by police officers and sheriff's deputies across Southern California. The defendants "are self-identified to be affiliated with Anti-fascists or Antifa," according to the criminal complaint.

Prosecutors allege the antifa members used pepper spray, small flag poles, sticks, and other items — including their fists — to attack the crowd at a pro-Trump "Patriot March" in Pacific Beach in January.

"Video evidence analysis shows that overwhelmingly the violence in this incident was perpetrated by the Antifa affiliates and was not a mutual fray with both sides crossing out of lawful First Amendment expression into riot and violence," said the office of San Diego County District Attorney Summer Stephan in a press release.

One man, Jeremy Jonathan White, 39, is accused of pepper spraying a dog and its owner, appearing to match video of the incident that was shared online.

"I was very heartened to see law enforcement take steps to make these arrests," said Kyle Shideler, director and senior analyst for homeland security and counterterrorism at the Center for Security Policy. "Hopefully it will be the start of a trend in state and local law enforcement to reject the inaccurate notion promoted by the FBI that Antifa lacks organization, network, or structure."

"Once again, local law enforcement has had to step up to fill gaping systemic failures which Chris Wray and a highly politicized Department of Justice refuse to address: enforcing the law equally, especially against violent rioters, irrespective of the perpetrators' political opinions or motivations," said Danik, who served nearly three decades with the bureau. "Wray, and his carefully selected echo chamber of rear-echelon executives, should take a lesson in law enforcement ethics from these professional southern California local agencies."

The antifa militants are accused of conspiracy to commit a riot and other felony charges, including illegal use of tear gas, assault by means likely to produce great bodily injury, and vandalism.

The alleged conspiracy began one week before the pro-Trump rally, according to the criminal complaint, which described antifa groups from Los Angeles and San Diego planning to commit acts of violence.

"Antifa, and similar anarcho-communist extremists, have elaborate but decentralized structures," explained Shideler. "But so do many criminal gangs and other terrorist groups which are understood by law enforcement to function as organizations, and which are addressed as such through a variety of laws to deal with such threats (gang designations, criminal conspiracy and racketeering charges, etc.)."

The FBI and the Justice Department have been reluctant to treat antifa as an organized threat, viewing it as a decentralized, leaderless movement.

"Many, like FBI Director Christopher Wray, have continued to say Antifa is not a group, but is an ideology," said Robyn Gritz, a retired FBI special agent who worked in counterterrorism for several years. "However, Antifa actually has a handbook entitled 'Antifa: The Anti-Fascist Handbook,' just like the al Qaeda manuals/handbooks found back in the 2000s."

Gritz explained that terrorist organizations often operate as cellular organizations composed of quasi-independent cells similar to those of antifa. "It doesn't make them any less of a terror group," she said.

When President Trump was in office, he pushed unsuccessfully for the U.S. to designate antifa as a domestic terrorist organization.

"With members in every one of the 50 states," Gritz said, antifa utilizes "sophisticated communication methods to plan their operations, just like other terrorist organizations. Using the 'it's an ideology' excuse gives politicians and the media, as well as the FBI director, the confusing semantics to describe only the why of what they do as opposed to who they are ... Wray confuses the reason behind Antifa's terrorist violence with who they actually are."

Gritz noted that antifa has individuals who are named leaders of the group, citing Daryle Lamont Jenkins of Philadelphia as an example, and uses terror to further its goals.

"Antifa pushes the unlawful use of violence and intimidation, especially against civilians, in the pursuit of their political aims and ideology," she said. "This fits perfectly into the definition used to designate terrorist organizations."

Others argue that designating Antifa as a terrorist organization would set a precedent that could change counterterrorism laws in major ways that wouldn't necessarily help America's national security.

In addition to the seven defendants arraigned on Monday, three other individuals face charges, and a fourth has a $250,000 warrant out for his arrest, according to the district attorney's office."I think we will continue to see that the effort to deal with Antifa violence will take place at the local and state level," Shideler said. "Law enforcement should be prepared not to wait on a federal law enforcement apparatus that has lost the plot."