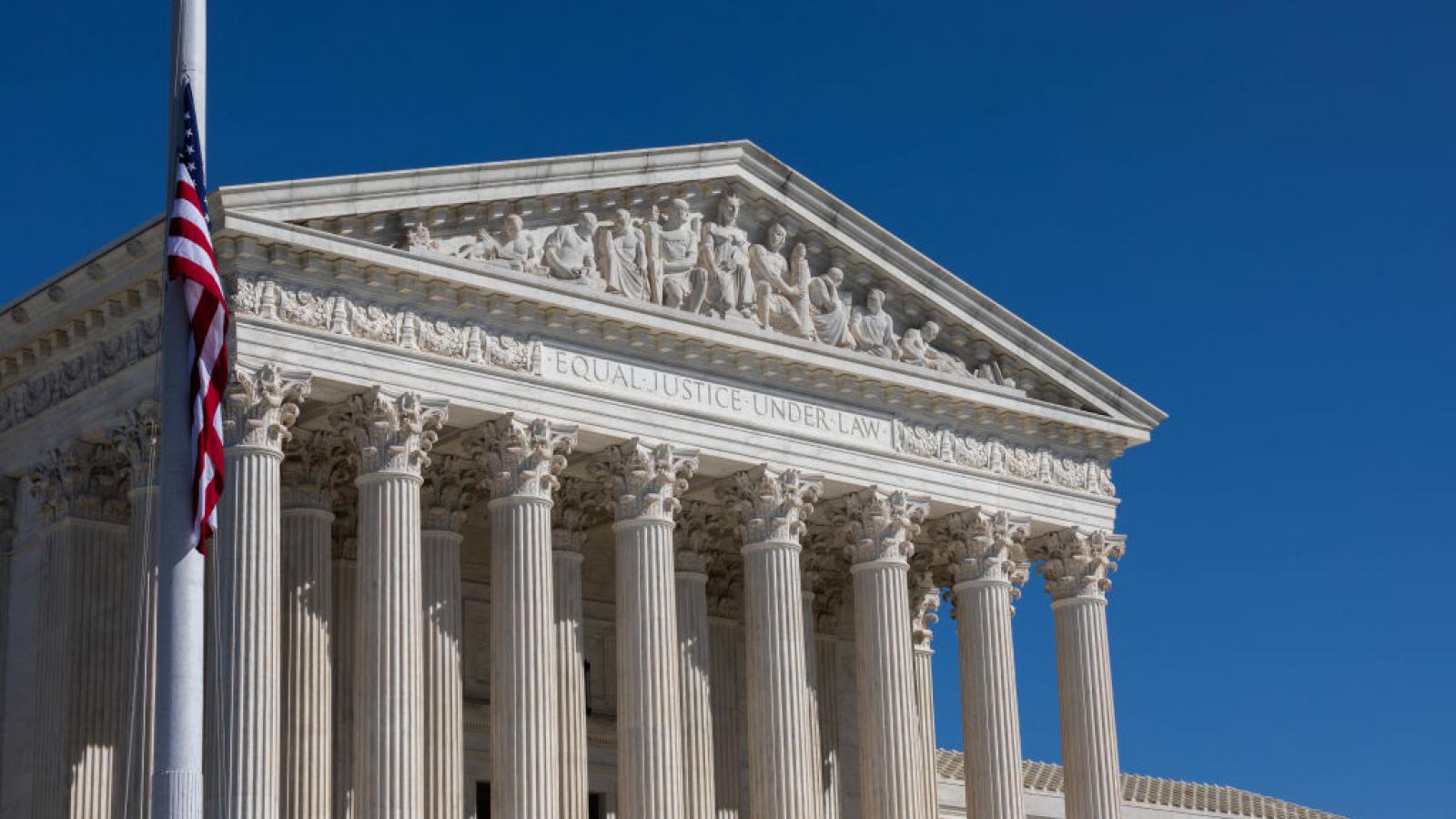 When it comes to the First Amendment rights of students outside of school hours and extracurricular activities, Justice Stephen Breyer doesn't want to write a "treatise." Neither does Justice Brett Kavanaugh.

Their colleagues on the Supreme Court likewise did not seem keen to drastically update their 52-year-old precedent on student speech, known as Tinker, for the era of social media.

In oral arguments Wednesday, justices grappled with whether to grant school officials the authority to regulate what students say when they aren't in the classroom or participating in other school-sponsored activities, such as team sports.

School boards across the country, backed by the Biden administration, want the high court to reverse an appeals court ruling that banned a Pennsylvania school district from punishing a cheerleader for a profane Snapchat rant at a convenience store over the weekend.

Advocates for religious freedom and the First Amendment rights of students, as well as several conservative states and humorist P.J. O'Rourke, urged the court to protect student speech from regulation outside of school-sponsored activities.

Justices expressed skepticism about each side's proposed legal test, especially how schools would determine that off-campus speech is "directed" at them and can thus be regulated.

Some justices seemed receptive to a halfway measure, though: limiting off-campus jurisdiction to extracurricular activities like team sports, at least in some situations.

Attorney Lisa Blatt, representing Mahanoy Area Schools, emphasized that schools only want the power to stop students from "terrorizing" each other or teachers, regardless of where it happens.

She said "madness, confusion and chaos" would result from the argument made by ACLU lawyer David Cole, who is representing cheerleader Brandi Levy. Blatt derided his "Twilight Zone" portrayal of schools as "the gulag," ordering students what to think and banning dissent.

Cole retorted that Blatt's argument would create a "24-7 rule" where students "carry the schoolhouse on their backs" everywhere they go. Justice Neil Gorsuch echoed the lawyer's argument that parental rights were endangered as schools expand their jurisdiction.

Justice Kavanaugh, who has coached his daughter's basketball team, agreed with Cole that students need space for "venting frustration," as Levy did when she failed to make the varsity squad.

She "blew off steam like millions of other kids" when they get cut from teams, Kavanaugh said, citing basketball great Michael Jordan. With Levy's yearlong suspension from the team, it "didn't seem like the punishment was tailored to the offense."

Justice Amy Coney Barrett said her colleagues didn't see a "material and substantial disruption" — the only exception to student rights under Tinker — stemming from the Snapchat rant. "Schools abuse this authority" by inventing disruptions, she told Blatt, when they could constitutionally issue "soft punishment" such as warnings for gray-area violations.

Alito: What about schools punishing students for their beliefs on biological sex?

Schools aren't trying to police political, religious or critical expression, or impose the heckler's veto, Blatt argued repeatedly to skeptical justices. They want to address digital bullying, harassment and cheating because it will inevitably affect school operations, as allowed by Tinker.

A student who is upset at her teacher can safely text her views to friends but not picket the teacher's house, Blatt told Chief Justice John Roberts: The "manner" of speech is the issue, not the offensiveness of it.

Justice Clarence Thomas asked Blatt what was the difference between off-campus speech about Black Lives Matter and Antifa, and classroom discussions about those hot-button issues, which can be "just as disruptive."

The lawyer rejected the suggestion that students can get in trouble for simply sharing unpopular views: Wearing a Confederate flag symbol "alone" is protected, but not using it to "terrorize" a black student.

Justices Elena Kagan and Neil Gorsuch were confused by Blatt's comments about political and religious speech being "absolutely protected" even when they could cause disruption, which is at odds with Tinker. The lawyer said she meant schools couldn't punish expression based on how other students respond, such as "threaten[ing] to riot."

Justice Samuel Alito said he worried how schools would implement Blatt's proposed rule that they could punish bullying speech that "targets" the school, regardless of location. He asked if a school could prevent a student who believes in biological sex from referring to a transgender student by a "prior male name" and male pronouns.

Blatt had an easy answer: Require students to use the names in the school records "as a matter of decorum." Courts should trust schools, which "try not to make mistakes while keeping kids from killing themselves because they're bullied."

Justice Sonia Sotomayor questioned how punishing a student for cursing on the internet, simply because it's related to "her unhappiness" with the school, was more justified than punishing her for cursing as she walks to school. Students mostly talk to their classmates, and often discuss their "authoritarian" school environment — speech that Blatt would seemingly regulate.

If schools can't punish social media expression, then Levy could post the same rant — which targeted her coaches and teammates — every day off-campus, Blatt argued. It's a threat to "team cohesion," she said: This cheerleader is "not somebody you'd want at the bottom of the pyramid."

(Though Levy is identified as "B.L." in the case, the ACLU has publicly named her, and she has been widely pictured in the media. Her Facebook page says she's in college.)

Justice Barrett said the lawyer had "good policy reasons" for expanding school authority over student speech, but little "doctrinal support" for expanding Tinker. She disputed Blatt's stated reliance on "100 years of case law that was unambiguous" before the 3rd U.S. Circuit Court of Appeals ruled against the school district.

Deputy Solicitor General Malcolm Stewart denounced the "rigid geographic approach" adopted by Levy's counsel. The court should avoid any "per se rule that off-campus speech is categorically exempt" from regulation, and give schools jurisdiction when speech will disrupt an essential part of a "particular school program," he told Breyer.

It's appropriate to subject team members to stricter regulation of their expression because "cooperation" is essential to the program, Stewart told Thomas. As a Justice Department employee, Stewart would expect to be disciplined if he badmouthed the agency on Snapchat, he said.

"Severe or pervasive interpersonal aggression" can always be punished

Cole, the cheerleader's lawyer, argued that schools can exercise jurisdiction the same as any other government entity without expanding Tinker beyond school-sponsored environments.

The behavior they seek to control, such as bullying and threats, is often explicitly barred by statute or not protected by the First Amendment, he said. The high court just needs to recognize small First Amendment exceptions based on "youth and context," he told Roberts: Harassment is different for a 12-year-old compared to a 25-year-old.

Cole pushed back on Thomas's claim that social media has a "permanence" that inevitably affects the classroom. The high court upheld a student's punishment for a "Bong Hits 4 Jesus" banner because it was hung across the street from a school-sponsored event, but the school couldn't punish the student for a similar Facebook post, Cole said.

Schools can still regulate "severe or pervasive interpersonal aggression" without violating students' speech rights, the lawyer argued — a standard that confused some justices.

Sotomayor said it wouldn't cover much of the troubling behavior by children, such as repeatedly calling a classmate "ugly" as they walk to school. "There's a lot of conduct that comes to the edge" of First Amendment rights, and schools could be "powerless" to address it under Cole's standard.

Justice Kagan gave the example of boys creating a website that ranks the appearance of their female classmates. "Schools have more latitude" than other government entities to "deal with" such speech, she said. Cole disagreed that his test wouldn't cover this behavior.

The lawyer also disputed suggestions by Gorsuch and Kavanaugh that his test could be functionally the same as school district lawyer Blatt's. Cole is advocating "careful definitions" of bullying and harassment, he said, not "waving your hands" and inventing disruptions for speech such as a "Blue Lives Matter More" banner.

Thomas asked the lawyer about a potential distinction between off-campus rules for the entire school and just extracurricular activities.

While Mahanoy Area Schools didn't appeal the finding that Levy didn't violate the rules of her cheer squad, Cole said schools can legally require conditions for participation in extracurricular activities as long as students know them before signing up.

What's most important is that justices not remove the "supervision" element from Tinker, which already authorizes an exception to First Amendment rights for disruptive behavior. If they do, Cole said, "you have turned the exception into the rule for 50 million public high school students."