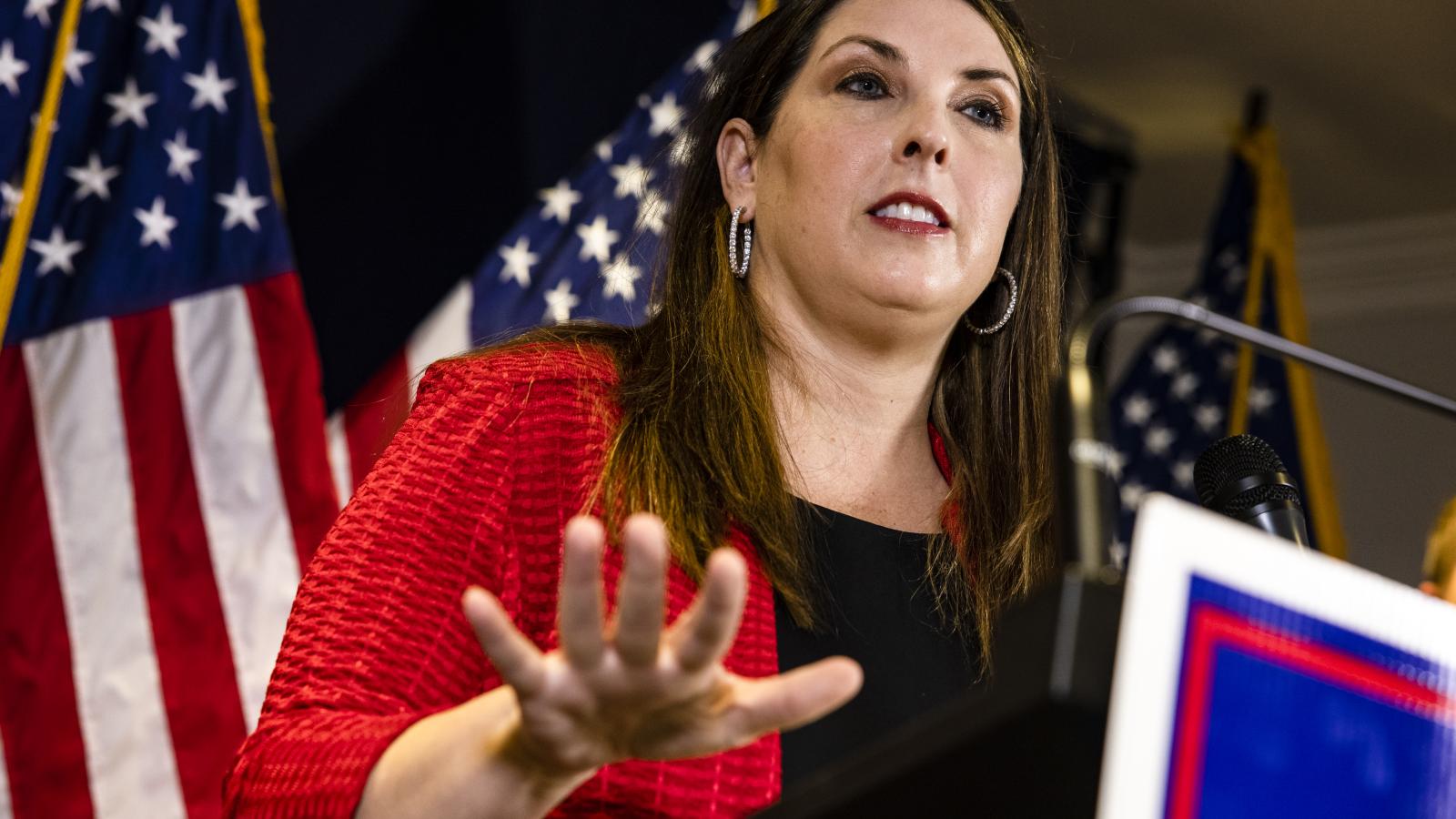 A growing number of Republican Party officials are frustrated with GOP Chairwoman Ronna McDaniel following Tuesday's midterm elections and want her to resign, according to Republican sources familiar with the situation.

"People are upset and want to replace Ronna," said one veteran Republican National Committee official. "They're calling for her resignation but not publicly. [RNC] members are calling for accountability as they should."

The official noted that, even before the 2022 midterms, Democrats gained control of the House in 2018 and then did the same in 2020 for both the White House and the Senate — including a runoff election in Georgia. McDaniel has been chairing the RNC since 2017.

Leading into Election Day this week, polling had indicated for months that Republicans would enjoy a landslide, red wave victory. However, Republican hopes for such a victory faded Tuesday night as Democrats performed better in House races than expected and won some key Senate and gubernatorial seats considered vulnerable.

As the vote count currently stands, neither party has secured a majority in the House or Senate, with more ballots to be tallied and more states to be decided. Republicans are leading and still likely to win control of the House, but by a much smaller margin than forecast. As for the Senate, it's anyone's guess, but any majority will be razor thin.

Still, McDaniel argued the results amounted to a big win for the GOP.

"I think the night turned out great," she said on Fox News after the election. "We are retiring [House Speaker] Nancy Pelosi. There was a wave that happened last night, and we are waving goodbye to Speaker Pelosi. And we are going to have a Republican majority in the House, which also means we're going to be able to stop this disastrous Biden agenda that's hurting the American people."

McDaniel added that the election outcome was "on track with what we were expecting," claiming the media pushed a "narrative that was unrealistic" and anyone who didn't think the GOP had a good night was "just wrong."

"When you win the game," the GOP chair said, "you don't say, 'Oh, did you win it by one point or two points?' You won the game. We just won the Super Bowl last night."

The veteran RNC official continued with McDaniel's sports analogy in his comments to Just the News.

"Ronna is a football coach, and our football team lost the game," the official said. "But she claimed we won the Super Bowl because we fired Pelosi. Except firing Pelosi was a given. When you talk about a red wave, we expect more than just firing Pelosi."

McDaniel has also come under fire for saying during her Fox News appearance that "we never used the word 'red wave' at the RNC," despite using the term herself multiple times while predicting major Republican gains.

The day after the election, McDaniel echoed some of the same talking points she used on Fox during a short conference call with 168 RNC members, according to the RNC official. However, no one had an opportunity to push her on what happened the prior night.

"Members want to ask: 'You promised a red wave, so what happened?'" the official explained. "But she wouldn't allow questions."

One RNC member questioned whether the party can continue trusting McDaniel. "Shall we award her another term as RNC chairman? That's the real question," the member said.

Outside the RNC, prominent Republicans — including lawmakers, strategists, and commentators — have also called for McDaniel to step down.

Other GOP voices, however, are similarly frustrated with the election outcome but cautioning against rash action.

"This didn't go as expected, and people are trying to figure out why," said Saul Anuzis, former chairman of the Michigan Republican Party. "Polling numbers were almost unanimous in terms of this vote going in the GOP's direction ... Everyone is nervous and trying to figure out went wrong. There has to be an assessment."

But, added Anuzis, it would be an "oversimplification" to blame any one person, whether McDaniel, Donald Trump, or Rep. Tom Emmer (R-Minn.), who chairs the campaign arm for House Republicans.

Like McDaniel, the RNC is taking a much more optimistic tone about the election.

"We took back the House, we're still in the fight to take back the Senate, and anonymous sources will not change the fact that the Republican National Committee delivered historic wins on Tuesday night," RNC spokesperson Emma Vaughn told Just the News. "Chairwoman McDaniel expanded the map by investing more in state parties than ever before, transferred tens of millions of dollars to our sister committees, built 38 brick-and-mortar minority community centers, employed over 1,000 staff in every Senate battleground state and in 70 House battleground districts who recruited over 1 million volunteers who made over 100 million voter contacts."

Earlier this week, the RNC released a memo highlighting its investments to help create "record-setting fundraising, a grassroots army, and a data-driven ground game."

However, critics pointed to what they deemed flaws in the party's approach to the campaign, including its approach to abortion.

Despite pre-election polling showing crime was the second most important issue to voters (trailing only the economy), with abortion often ranking third, exit polls after the election placed abortion as the second top issue (again only behind the economy), but well ahead of crime.

"Abortion played a bigger role than most people thought it would, especially motivating younger people," who voted overwhelmingly for Democrats, said Anuzis.

The veteran RNC official pointed the finger at McDaniel for not sufficiently countering Democrats "playing the abortion card" after the Supreme Court overturned Roe v. Wade, which had established a constitutional right to an abortion.

"The RNC had no strategy to counter what the Democrats were saying about abortion," the official said. "We didn't explain that the Supreme Court allowed each state to decide the issue for themselves, so if you want you can introduce a bill to allow abortion for the state to decide. Ronna didn't show up to talk shows to talk about this ... we weren't using earned media to educate voters."

Both the RNC official and Anuzis also chided the RNC for being a step behind Democrats when it comes to the mechanics of casting ballots.

"We did not have an early voting strategy," the official said. "Voters can vote a month early, but we're still asking our voters to vote on [Election Day]."

Anuzis agreed the party didn't handle early absentee voting well but clarified that's "not necessarily" McDaniel's fault. He noted that Michigan, where all registered voters can submit an early absentee ballot, sent the ballots out over a month before Election Day, but the state GOP failed to follow up with calls or mailers to check that people actually voted.

"You're leaving Republican votes on the table by assuming they vote rather than ensuring they vote," he said. "We've changed the way we run elections. We're dealing with month-long elections rather than just Election Day and need to adjust. If you hold a big rally in the last week of the campaign, you may have already missed a large number of people who already voted."

According to a new analysis by Bridge Michigan, absentee ballots made up roughly 40% of all votes in Michigan, and Democrats proved far more likely to vote absentee, giving them a big lead before Election Day.