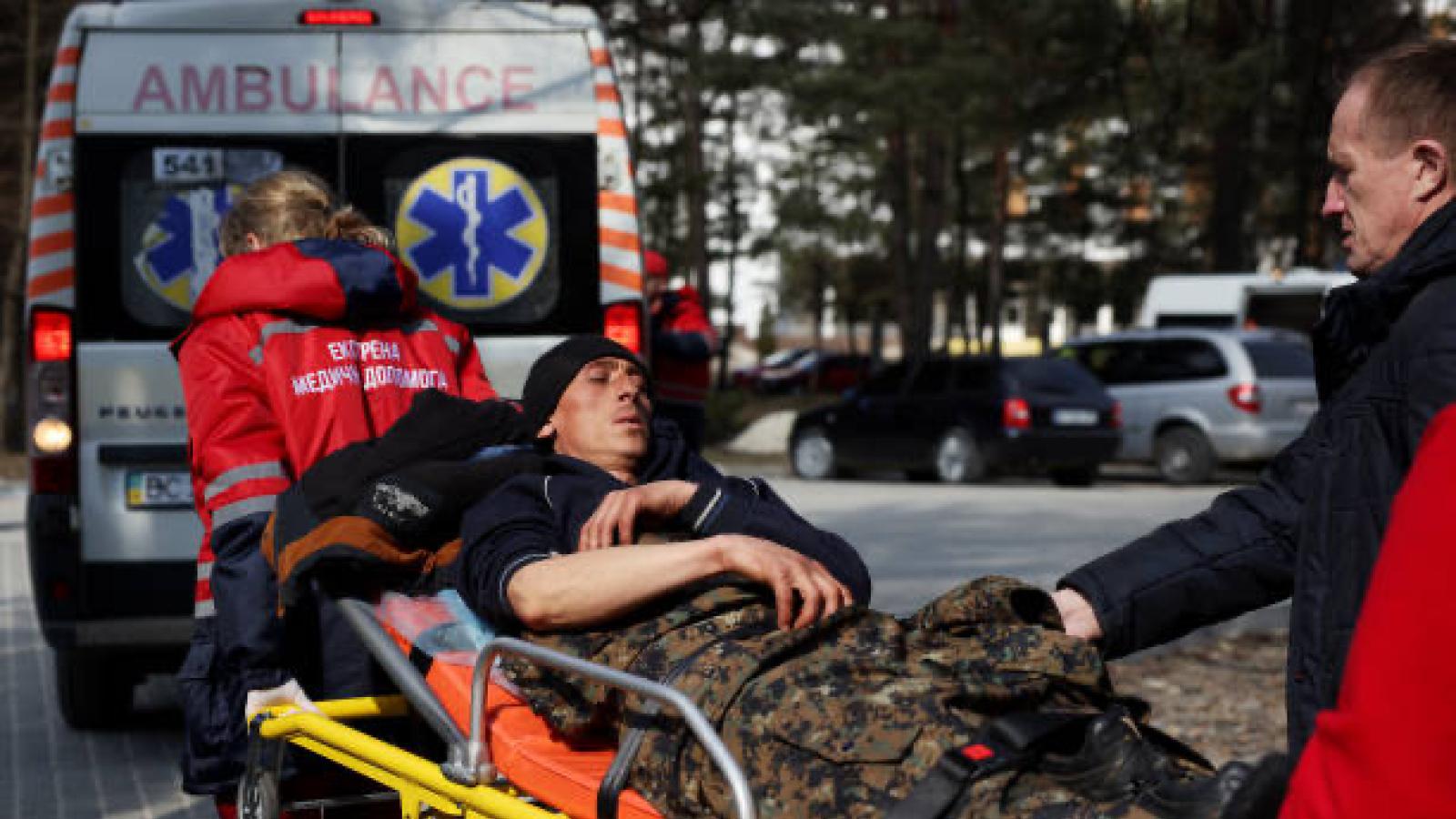 Injured man at military base near Poland.
Getty Images
By John Solomon

Russia launched a heavy volley of missiles Sunday on a military base in western Ukraine near the Polish border, killing 35 and injuring scores at a location often used by NATO trainers.

By Sunday evening, reports surfaced that Russia has requested military assistance from China as its unprovoked invasion of Ukraine enters a third week.

National Security Advisor Jake Sullivan on NBC warned China against assisting Russia, but he did not say what measures would be taken by the United States if Beijing gets involved.

"We will ensure that neither China, nor anyone else, can compensate Russia for these losses," Sullivan said on Sunday. "In terms of the specific means of doing that, again, I’m not going to lay all of that out in public, but we will communicate that privately to China, as we have already done and will continue to do."

Russian and Ukranian officials have spent the weekend in negotiations for a possible ceasefire that could end the conflict in the next few days.

In a possible positive sign, Podolyak said that a negotiating session will be held Monday "to sum up the preliminary results" from negotiations.

"According to my personal expectations, this progress may grow in the coming days into a joint position of both delegations, into documents for signing," Slutsky told state-run RIA Novosti, as translated by The Epoch Times.

The airstrike on the International Peacekeeping and Security Center in Yavoriv Sunday morning was believed to be the westernmost attack launched by Russian forces in the three-week-old war, landing just 15 miles from the border with Poland.

Lviv governor Maksym Kozytskyi told The Associated Press many of the missiles fired Sunday “were shot down because the air defense system worked” but still at least 35 people were killed and 134 wounded.

Russian Ministry of Defense spokesperson Maj. Gen. Igor Konashenkov said during a briefing Sunday that "up to 180 foreign mercenaries and a large consignment of foreign weapons were destroyed" in the attack.

Ukrainian Defense Ministry spokesperson Markiyan Lubkivsky told CNN that the claim was "pure Russian propaganda," and said no foreigners have been confirmed dead in the Kremlin's attack.

Meanwhile, Ukrainian authorities confirmed the American journalist and Peabody-award winning filmmaker Brent Renaud was killed during fighting Sunday in a suburb of Kiev.

Over the years Renaud worked for The New York Times, HBO, Vice News and NBC.

The escalating violence came as Russian President Vladimir Putin warned he would use military action to stop western military aid to Ukraine, and as signs of a blame game surfaced in Moscow after a lackluster military performance by Russian troops.

Putin reportedly placed two of his top intelligence officials on house arrest as he sought accountability for a war plan that U.S. intelligence says has not succeeded as planned.

The Center for European Policy Analysis as well as several foreign newspapers reported that the top two officials of the FSB’s fifth service were placed under house arrest. The FSB is Russia’s main spy service and was once headed by Putin.

“Colonel-General Sergei Beseda, and his deputy were being held after allegations of misusing operational funds earmarked for subversive activities and for providing poor intelligence ahead of Russia’s now-stuttering invasion,” CEPA reported.

“The operation has hit serious obstacles, not least fierce, resistance by the Ukrainian armed forces and the unity of the population, including most Russian-speakers, behind President Volodymyr Zelenskyy and his government,” it added.

Despite fierce resistance, Russian forces have in recent days made advances in the East and South of Ukraine. The Russian Ministry of Defense announced Sunday that its troops had moved North from Donetsk and secured the southern portions of Pavlivka, Mykilske, Volodymirivka and Blahodatne villages within the oblast. From Kherson, Russian troops are pushing toward Krivoy Rog while in the East, they have advanced to the outskirts of Severodonetsk.