"I'm very appreciative of that — I was surprised to hear it," Trump said. "I think it was a terrific thing, and I think it makes a lot of people happy."

Despite being a vocal critic of his predecessor, Biden on Tuesday praised Trump twice. Biden first said, "Thanks to the prior administration and our scientific community, America is one of the first countries to get the vaccine."

The 79-year-old president added, "Just the other day, former President Trump announced he had gotten his booster shot.  It may be one of the few things he and I agree on. People with booster shots are highly protected. Join them. Join us."

Trump responded during an interview with Fox News later that day.

"I'm very appreciative of that — I was surprised to hear it," Trump said. "I think it was a terrific thing, and I think it makes a lot of people happy."

He reiterated that he was "a little bit surprised," adding, "I think he did something very good. You know, it has to be a process of healing in this country, and that will help a lot."

The 45th president doubled down on his support of COVID vaccinations during an interview with Candace Owens of the Daily Wire, calling the development "one of the greatest achievements of mankind."

"The vaccines work, but some people aren't the ones taking it," Trump told the vaccine-hesitant Owens. "The ones who get very sick and go to the hospital are the ones that don't take the vaccine. But it's still their choice. And if you take the vaccine, you're protected."

"Look, the results of the vaccine are very good, and if you do get it, it's a very minor form. People aren't dying when they take the vaccine," the 75-year-old former president added.

The Biden administration has long denied credit to Trump for his work on vaccines. Operation Warp Speed was a public-private partnership to roll out COVID vaccines in record timing under the Trump administration. Both Biden and Vice President Kamala Harris stated before entering office that they would not trust a vaccine developed under Trump.

White House chief of staff Ron Klain retweeted a comment from Washington Post opinions columnist Max Boot who wrote, "Never thought I’d say this but: Trump is right and I hope lots of people listen to him. Vaccination should not be another red-blue dividing line."

He tweeted his joy over Trump's stance on vaccines Monday. "Never in my life did I ever think I would watch Donald Trump utilize an accurate historical example to justify the effectiveness of the COVID-19 vaccine against Candace Owens of all people and I’M SCREAMING. What the absolute fresh hell is happening? Is this the same Trump?!," he wrote.

"Look, Trump horribly mismanaged the pandemic when he was in office, but this pivot he's making to pushing back on vaccine misinformation from his supporters is a good thing and I hope he keeps it up," liberal journalist Aaron Rupar stated.

Ahmed Baba, founder of the liberal Rantt Media posted on Twitter: "I never thought I’d see Trump debunk Candace Owens’ vaccine misinfo in real-time. Y’all know where I stand on Trump. I spent the last 6 years opposing him. But I’ll amplify every single time he promotes the vaccine because this is bigger than politics. It’s about saving lives."

Actress Bette Midler, one of Trump's harshest attackers, made a comment about Trump that was still critical, but she did give him credit for his COVID comments.

"Donald Trump admitting he got a booster shot was like music to my ears. Bad music performed by someone with zero talent or charisma, that I would switch off halfway through the song, but technically music nonetheless!" she tweeted.

Republican presidential primary candidate Jeb Bush has argued with Trump on numerous occasions, but he also changed his tone. "Very good for President Trump. He should have taken more credit for the rollout of the vaccines at warp speed and the result has saved lives. He is right to advocate people getting vaccinated," he wrote on Twitter.

Late Sen. John McCain's daughter Megan gave credit too. "Trump schooling Candace Owens with facts and logic regarding getting the vaccine is really a sight to behold. Credit where credit is due and I hate the guy," she tweeted.

Teeing up? Trump calls himself '45th and 47th' president, as net approval surges to +3 in new poll 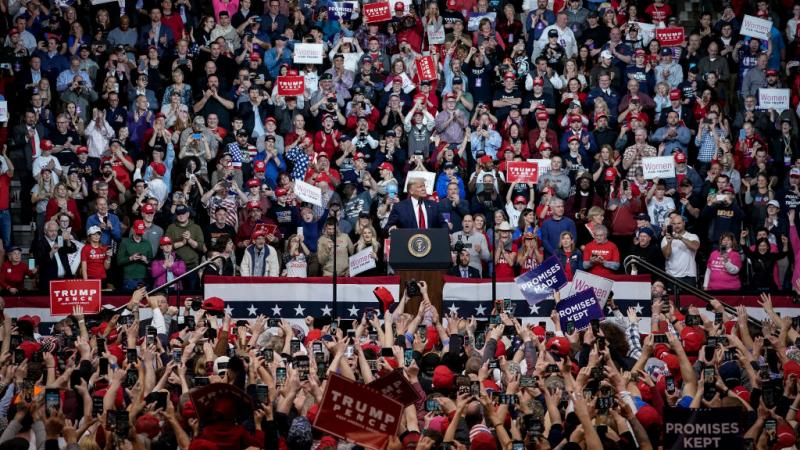