At least the second action this summer by the Microsoft-owned professional social network against a vaccine scientist. 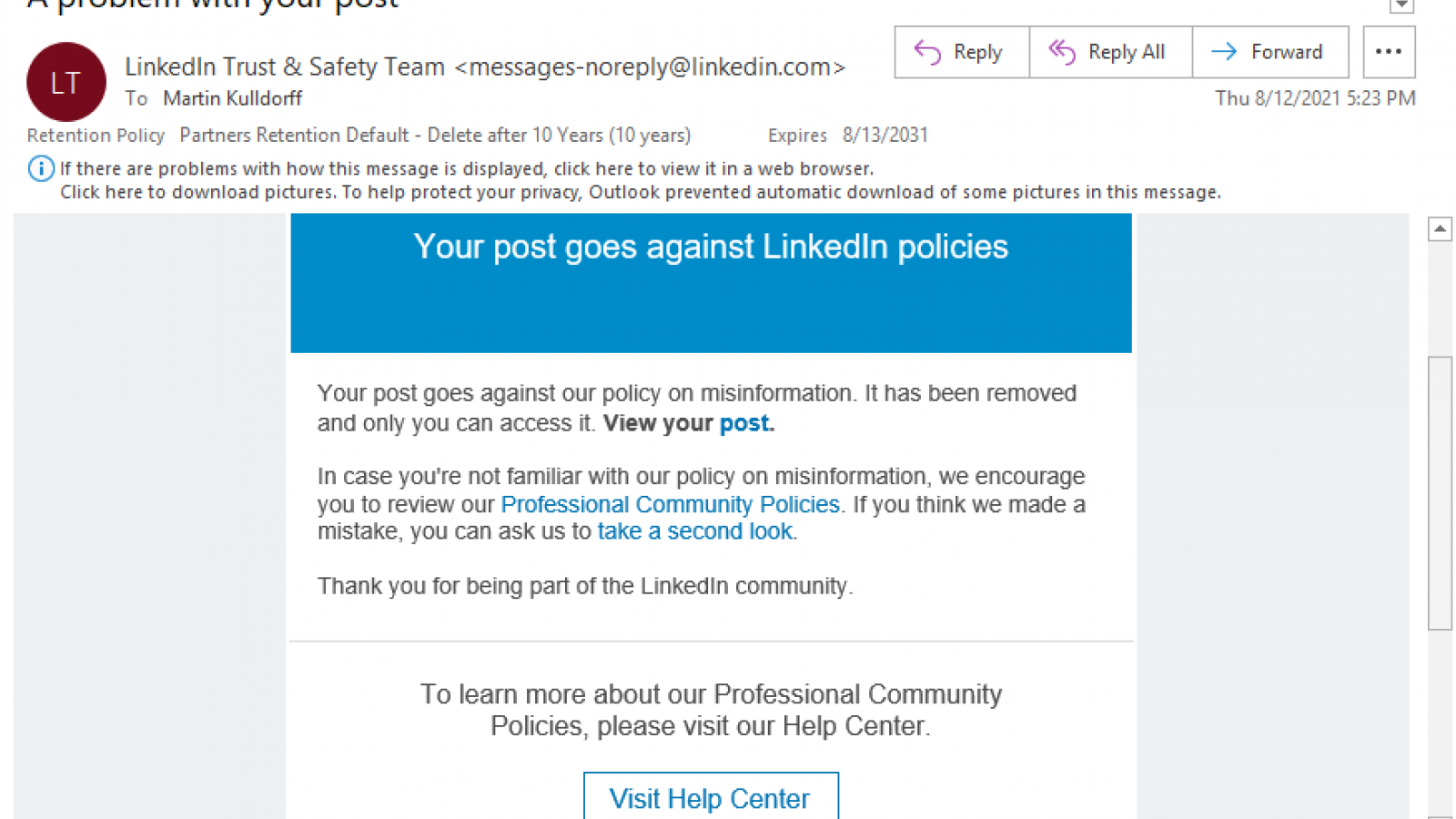 Martin Kulldorff started relying on LinkedIn to share news and views on COVID-19 policy after Twitter suspended the Harvard Medical School professor for a month for questioning the protective power of masks.

Now the Microsoft-owned professional social network is scrutinizing his posts, going so far as to remove two for violating its misinformation policy.

It's at least the second action LinkedIn has taken this summer against a vaccine scientist who questioned COVID-19 orthodoxy.

It suspended Robert Malone, who credits himself as the inventor of mRNA vaccine technology, for alleging dangers from the "spike protein" in mRNA vaccines, citing heart-inflammation reports in some vaccinated young people and highlighting Big Tech censorship and conflicts of interest. A LinkedIn "senior executive" personally apologized to him for wrongful removal, Malone said.

Kulldorff made a similar cost-benefit argument against mandatory COVID vaccinations for young people in a June op-ed. He directed Twitter followers to find the op-ed on his LinkedIn page because "Twitter does not allow vaccine scientists to freely discuss vaccines."

Now he's directing Linkedin followers to find him on Twitter, though the scientist confirmed to Just the News that he is concerned about further censorship there, "so I self-censor on Twitter."

One of Kulldorff's Harvard Med colleagues spoke against LinkedIn for the censorship.

"The point is not whether a minority viewpoint is right," bioethics professor Jonathan Darrow, who cowrote a journal article with Kulldorff last year, wrote in an email. If such views are silenced, "public health options may be closed off prematurely, matters may be erroneously believed to be settled, and needed research may never be conducted."

As with Malone's suspension, LinkedIn has not responded to Just the News on what specifically violated its rules in Kulldorff's posts. It previously declined to explain why it removed a post about Hunter Biden's laptop by a former Department of Homeland Security official.

The vaccine safety pioneer has also faced professional blowback for his views. The CDC kicked Kulldorff off a vaccine safety panel for publicly questioning its recommendation for a pause in distribution of the Johnson & Johnson vaccine, then adopted his view days later.

'Censoring someone from quoting the CDC director'

The censorship by two large social networks has left Kulldorff heavily reliant on the small social media platform Gab, which is dominated by conservatives. He shared the same posts there that LinkedIn removed.

The first post removed by LinkedIn pointed to his new interview with the Epoch TV program American Thought Leaders. The screenshot in the post read "Dangers of Vaccine Mandates," referring to Kulldorff's criticism that mandates are increasing vaccine hesitancy.

The other was a repost from Icelandic business consultant Thorsteinn Siglaugsson on comments by the Icelandic government's top epidemiologist, who concluded mass vaccination couldn't stop COVID-19.

"Herd immunity must be achieved by transmitting the virus," the headline reads in Google's translation of the article from Icelandic newspaper Visir.

"That is like censoring someone from quoting the CDC director, but for a smaller country," Kulldorff wrote in an email. Both he and Siglaugsson noted that LinkedIn has not removed the latter's post from Aug. 8, even though LinkedIn recently removed two vaccine-related posts by Siglaugsson. (It reinstated one that quoted a study on natural immunity in British medical journal The Lancet.)

Kulldorff went on the offensive against LinkedIn Thursday night, posting the email notification he received from the platform's Trust & Safety Team. It made no mention of what specific content in the posts qualified as misinformation, and Kulldorff told Just the News he hasn't received an explanation a day later.

Surprisingly, LinkedIn responded in the comment thread on Kulldorff's post. The Social Support Team said "if you think we made a mistake, you can ask us to take a second look by following the link in the email" he had posted.

Darrow, the Harvard Med bioethicist, also commented in the thread to point readers to an interview he did on censorship in medicine.

He told Just the News his interest in protecting minority views stems from "a major focus of my own career": questioning the effectiveness of drugs relative to their portrayal in the media and healthcare system.

COVID-19 orthodoxy has "unjustifiably tarnished" the reputations of scientists such as Stanford University's John Ioannidis, "one of the most well-respected luminaries" in evidence-based medicine, Darrow said. Ioannidis lost that respect "because he publicly presented data about COVID's infection fatality rate that were politically unpopular."

Censorship is also "communicable," according to Darrow, "potentially tipping the scales of public judgment one way or the other and leading to a downward spiral of intolerance in which minority views are increasingly suppressed."

The result in scientific publishing is that unpopular ideas "supported by high quality evidence" can't get published, preventing authors with similar ideas from pointing to earlier research so they can get published or obtain funding, he said. "When media 'fact-checkers' look to verify facts, there can therefore be a relative absence of literature supporting one or another view."

Darrow warned that private media platforms are the new "public square," not beholden to First Amendment obligations yet "taking on a government-like censorship function." They are targeting "prominent professors who have spent decades learning about the topics in which they are expert, and who do not necessarily have any conflicts of interest."

Kulldorff said his colleague "has a long standing concern and interest in scientific freedom" but the two have not discussed his social media censorship problems.