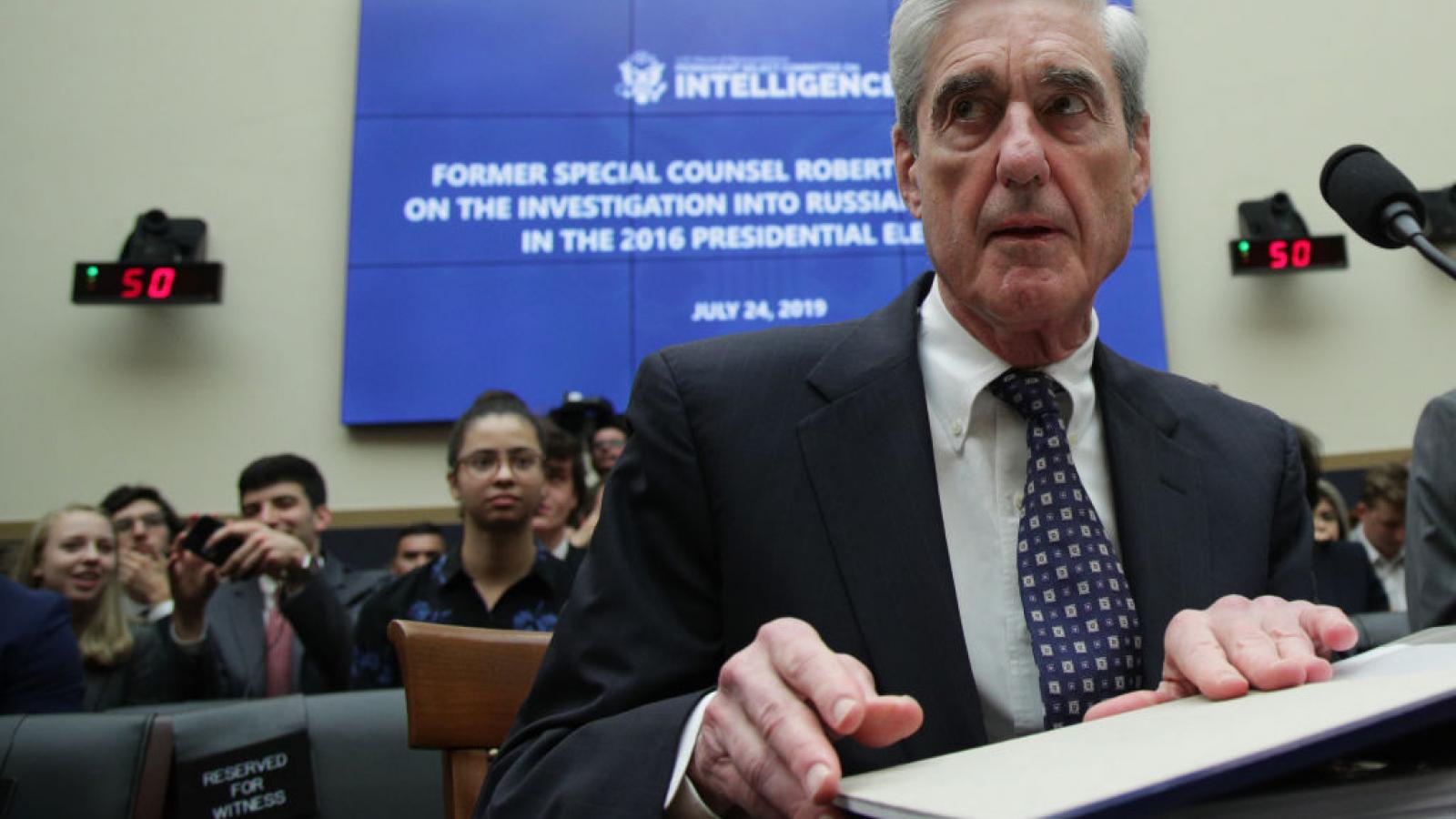 Robert Mueller waits to testify about his report on Russian election interference in 2016.
(Alex Wong/Getty)
By Lee Smith
Updated: May 18, 2020 - 8:57am

The DOJ’s court filings provide telling new public indications that the department’s investigative searchlight has swiveled around to shine on a pattern of questionable tactics employed by prosecutors working for Special Counsel Robert Mueller’s probe into now-debunked claims of collusion between Russia and the Trump campaign to hijack the 2016 election.

Based on the filings and conversations with senior Trump administration sources, it now appears that U.S. Attorney John Durham’s inquiry into the origins and conduct of the Russia probe is widening, and several senior U.S. officials — Mueller prosecutors as well as top FBI leadership — may be under scrutiny.

Flynn, Donald Trump’s first National Security Adviser, pleaded guilty in December 2017 to making false statements to the FBI. On May 7, Barr sought to withdraw those charges. According to the government, the FBI interview of Flynn was ordered in the context of an investigation that could no longer be defended as “justifiably predicated.”

Last month, the acting Director of National Intelligence Richard Grenell declassified documents showing that the FBI team investigating Russian interference in the 2016 elections had, according to Attorney General William Barr,  set a “perjury trap” for Flynn.

Despite a February 2018 order from the judge in the Flynn case Emmett G. Sullivan to prosecutors to turn over all material exculpatory evidence to the defense — including information impeaching the credibility of witnesses against him — prosecutor Brandon van Grack never turned over any of the recently released information showing:

Silence about Trump Tower meeting exculpatory evidence: The special counsel withheld information regarding the June 2016 Trump Tower meeting, preserving the viability of the Trump-Russia collusion narrative. The New York Times story of the meeting between a lawyer connected to the Russian government and Trump campaign officials, including the president’s eldest son, became one of the pillars of the discredited Trump-Russia narrative. House Intelligence Committee Chairman Adam Schiff claimed that Donald Trump Jr.’s demand for dirt on Hillary Clinton at the meeting constituted “direct evidence” of collusion. However, within four days after the July 8, 2017 New York Times story broke, a translator who was at the 2016 meeting told the FBI that Trump Jr. did not discuss dirt on rival candidate Clinton or any other suspicious subject. Rather than make the translator’s information public, the special counsel stood by as a media narrative took shape insinuating that the president’s son had “colluded” with the Russian lawyer.

Court filings with deceptively edited email: In November 2017, Mueller prosecutors filed court documents with deceptively edited email between Papadopoulos and other Trump advisers. The other Trump officials are unnamed in the filings, but their identities were publicly revealed through leaks to the media, including the Washington Post and the Guardian. An email from Trump campaign foreign policy advisor Sam Clovis was edited to make it seem as though the former NORAD inspector general was encouraging Papadopoulos to pursue contacts with Russia, when in fact the full email shows that he told him not to.

Scope memo used debunked Steele Dossier to set investigative parameters: Deputy Attorney General Rod Rosenstein’s Aug. 2, 2017 memorandum laying out the scope of the special counsel investigation relied on the discredited “Steele Dossier” of Clinton campaign opposition research to set some of the Mueller prosecution’s parameters. For instance, the scope memo includes allegations that Trump campaign advisors Carter Page and Paul Manafort “committed a crime or crimes by colluding with Russian government officials with respect to the Russian government’s efforts to interfere with the 2016 election for President of the United States.”  These allegations must have come from the Steele Dossier, as their provenance is unique to that compilation.

By the time Rosenstein wrote the scope memo, the dossier had already been disavowed by Steele’s alleged main source. Questioned by the FBI in January, March, and May 2017, the dossier’s so-called primary subsource said that the intelligence on Trump-Russia ties he is alleged to have given Steele was “word of mouth and hearsay.” Team Mueller would go on  to spend nearly two years and $40 million to “investigate” a collusion narrative which, as they knew from Steele’s primary subsource, issued from remarks made in “jest” and conversation “with friends over beers.”

Mueller final testimony ignores Steele Dossier: In his July 24, 2019 congressional testimony regarding his investigation into Russian election meddling, Mueller said he would not discuss “matters related to the so-called Steele Dossier.” The SCO's final report makes little mention of the former British spy’s collection of reports, even though it was the source underlying  the central premise Mueller was tasked to investigate — whether the Trump campaign had colluded with Russia. Accordingly, the facts that the Clinton campaign paid for Steele’s reports and that the FBI used them to obtain a Foreign Intelligence Surveillance Act warrant on Trump adviser Carter Page are missing from Mueller’s official record of his work. Obscuring the centrality of the Steele Report, moreover,  enabled prosecutors to evade disclosing that during three FBI interviews, Steele’s primary subsource disavowed the former British spy’s reports.

The secret side deal: According to Flynn’s current lawyer Sidney Powell, special counsel prosecutor Van Grack made a secret side deal with Flynn’s previous counsel. After threatening to indict Michael Flynn Jr., Van Grack agreed not to indict the general’s son as a material term of the plea agreement but required that it be kept between himself and Flynn’s previous counsel in order to avoid having to disclose it to the courts..

Improper acquisition of transition emails: In December 2017, a lawyer for the Trump transition team alleged that the SCO had improperly obtained the transition team’s emails from the General Services Administration. “We understand that the special counsel’s office has subsequently made extensive use of the materials it obtained from the GSA, including materials that are susceptible to privilege claims," wrote transition team lawyer Kory Langhofer. Flynn’s emails are believed to have been among the cache appropriated by the prosecutors.

Misleading Trump’s lawyers about his status: On March 5, 2018, Mueller told Trump’s lawyer John Dowd that the president was not a focus of the SCO probe. He was a “witness-slash-subject,” said Mueller. Dowd asked: “You mean he has no exposure?” Mueller confirmed that Trump had no exposure. That was incorrect. A few months before, Mueller’s top appellate lawyer Michael Dreeben was in a Manhattan court saying Trump was being investigated for obstruction of justice. The transcript of the secret court session was under seal until May 2019.