Just the News, New York Post, Fox News, Epoch Times and Breitbart were identified among the "most prominent domains" whose election coverage was cited in tweets flagged by the Election Integrity Partnership and its collaborators. 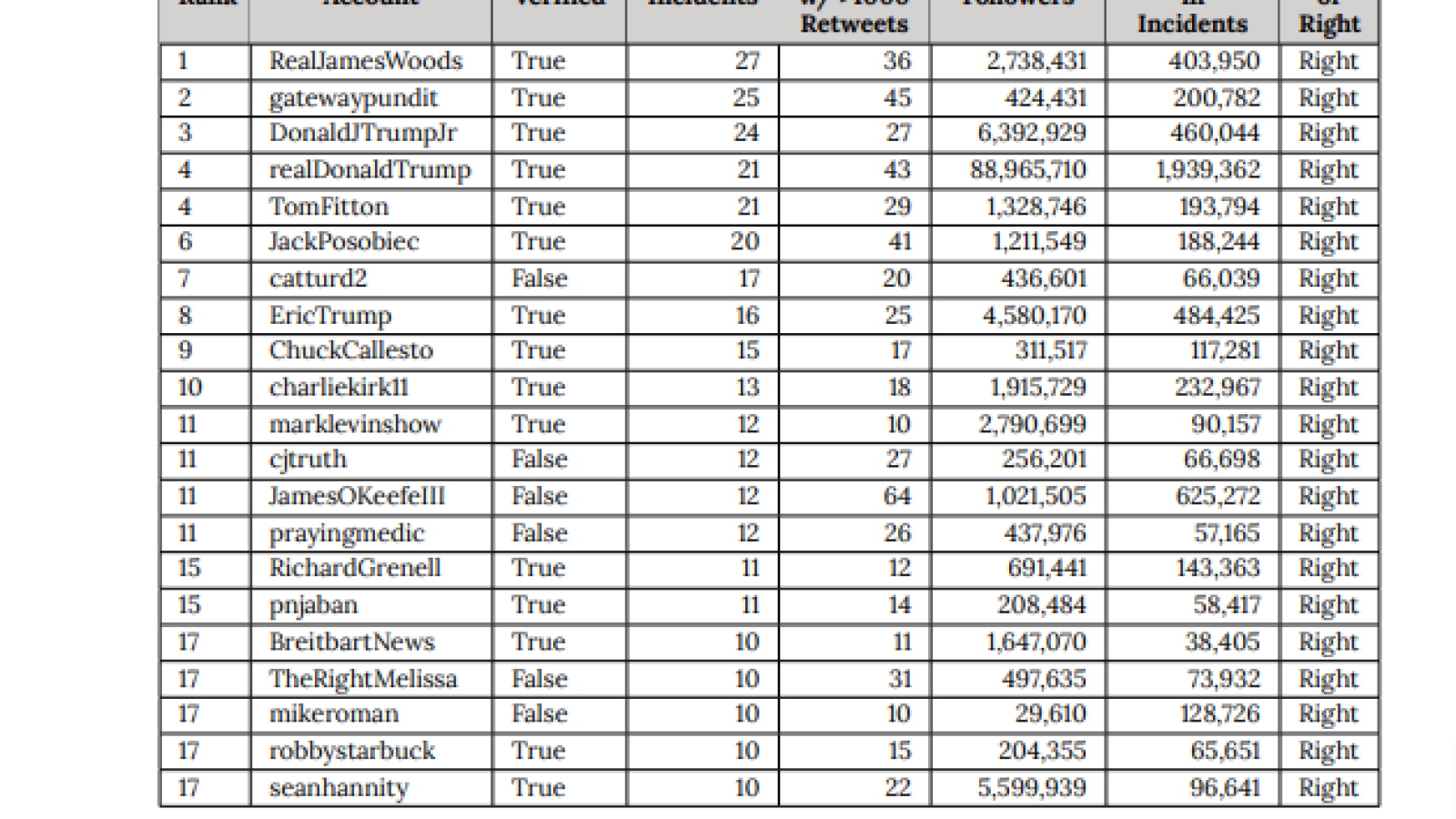 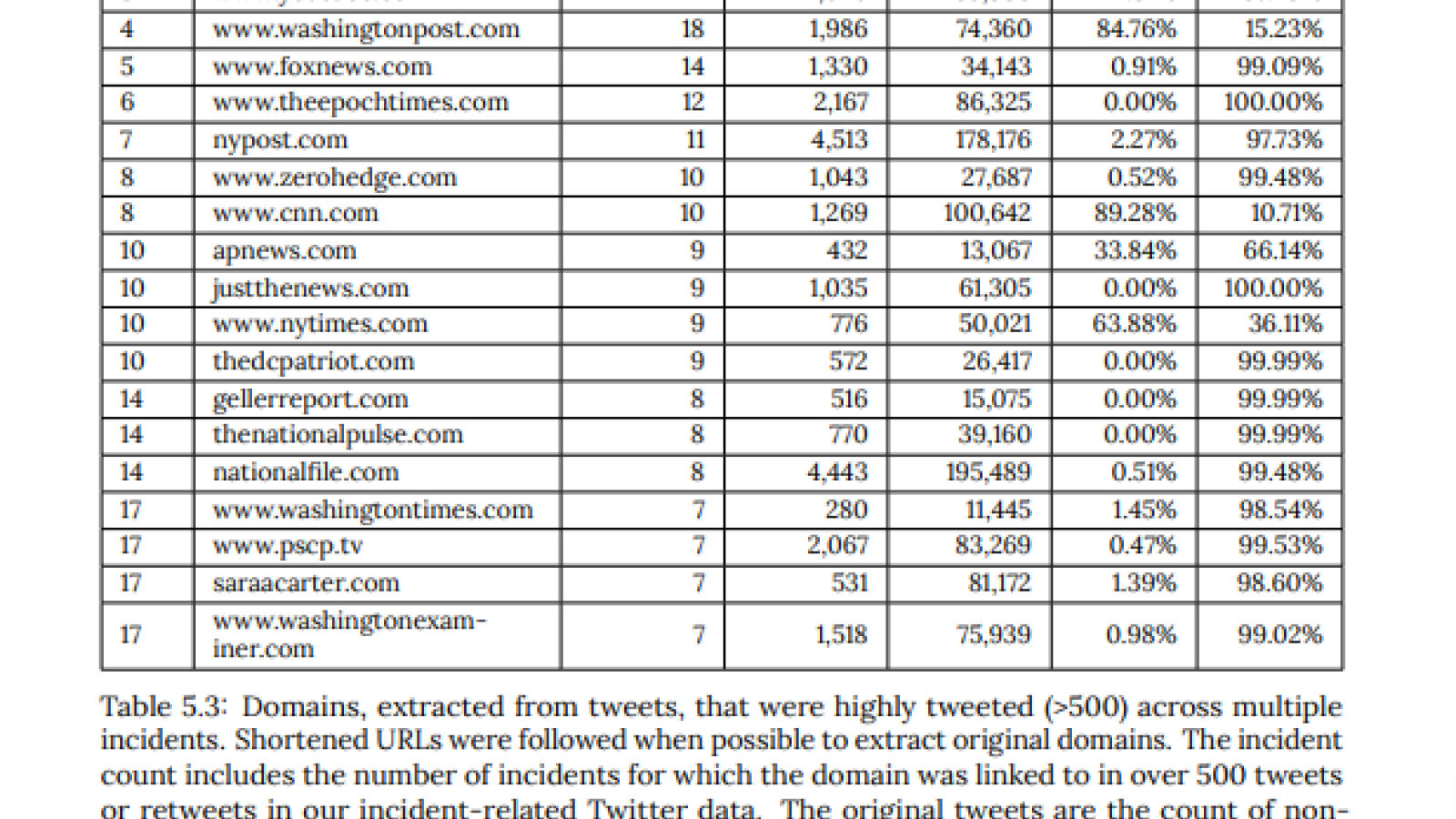 The private consortium that reported election "misinformation" to tech platforms during the 2020 election season, in "consultation" with federal agencies, targeted several news organizations in its dragnet.

Websites for Just the News, New York Post, Fox News, Washington Examiner, Washington Times, Epoch Times and Breitbart were identified among the 20 "most prominent domains across election integrity incidents" that were cited in tweets flagged by the Election Integrity Partnership and its collaborators.

The Washington Post, New York Times and CNN also appeared on the list, though the consortium's after-action report emphasizes most of the mainstream media reports "were referenced as fact-checks" that played a "corrective role" against "misleading narratives."

The report also identified the 21 "most prominent repeat spreaders [of misinformation] on Twitter," all of them politically classified as "right." Actor James Woods led that group, followed by The Gateway Pundit blog, Donald Trump Jr. and President Trump himself. The report emphasized 15 were verified by Twitter.

The Department of Homeland Security's Cybersecurity and Infrastructure Security Agency, the State Department, and liberal groups such as the Democratic National Committee, also flagged purported misinformation through the consortium.

"No news organization should be subjected to an enemies/censorship list for reporting newsworthy facts" Just the News Editor in Chief John Solomon said in a statement. "It's even more egregious that this censorship machinery was prodded, aided and sanctioned by the federal government."

Individuals and organizations named on the lists told Just the News they put no stock in the designations.

"How is this any different from what happens in Communist Party-controlled China?" publisher Jim Hoft said. "The scary thing is, the EIP is only a single office within the greater government-wide Ministry of Truth."

"We noticed a massive drop off on and around the 2020 elections. It got really bad after [Jan. 6, 2021]," paired with apparent "increased leftwing bot activity," Turning Point USA founder Charlie Kirk wrote in a text message.

"Compared to my engagement on every other platform, there's no question that this new revelation fits with our lived experience on Twitter," he said. "That tax payer dollars are being spent to censor half the country is a travesty and whoever is behind this must be held accountable."

"The definition of 'disinformation' is now any reported facts that go against the world view of the political establishment," Breitbart News Editor in Chief Alexander Marlow wrote in an email.

The consortium "relies on innuendo and insinuation to imply we are not trustworthy and thus should be censored" rather than accusing Breitbart "of publishing inaccurate stories," he said. The company is being targeted for "having a massively powerful platform that leads the political conversation every single day."

"We're in the middle of what I would call the 'Great Suppression,'" Judicial Watch President Tom Fitton told Just the News. He was suspended by Twitter for several months for comments on hydroxychloroquine.

"This is the destruction of American liberty right before our eyes," conservative activist Pamela Geller wrote in an email. She called it "more than just campaign rhetoric ... This is a fascist regime aiming to criminalize political dissent."

Human Events senior editor Jack Posobiec said "the crooked scumbags that run the regime target me so often" because they are "terrified" of him.

"We are not going to stop fighting for freedom until their entire edifice [is] torn down," he vowed.

The consortium report said it identified domains that were "linked to by more than 500 tweets or retweets" in multiple incidents, and further explained the role some of them allegedly played in an appendix on "additional partisan news outlets."

By the number of incidents (46) and combined tweets and retweets (870,000), The Gateway Pundit led the pack. It had an "estimated right/left spread" of 0.08% left and 99.92% right, meaning "the proportion of original tweets made by influential users classified on the ideological spectrum based on our network analysis."

The appendix says Just the News "produced stories that applied political commentary to narratives asserting election fraud and was involved in spreading the Nevada Whistleblower narrative," referring to an affidavit alleging that county supervisors ignored mismatches between names and signatures on mail-in ballots.

"The documents indicate we were flagged for reporting on a sworn declaration that prompted litigation in Nevada," noted Solomon. "The allegations were widely reported, including in the Washington Post and local news sites. One voter admitted she was registered four times because of faulty signature detection. The allegations even prompted a judge to let the Trump campaign review one of the signature verification machines."

The allegations "also were bolstered by a local reporter's claim he was able to fool the election system and register multiple times under different names with the same signature," Solomon continued. "In the end, the lawsuit was dismissed. Just the News covered this saga. Coverage of a public court case cannot and should not be censored, flagged or labeled as disinformation. We are exploring our legal options."

The report is particularly harsh on the Epoch Times, accusing it of "spreading mis- and disinformation in the Chinese-language media sphere" such as "Hunter Biden's alleged ties to the Chinese government."

Memos from the partnership that the presidential son operated with a prominent Chinese business executive, however, show that the Biden family pursued more than 20 major deals during the Trump administration for Chinese interests seeking U.S. energy assets.

The New York Post — with 11 incidents, more than 180,000 tweets and retweets and a right spread of 97.73% — was guilty of "reporting on unfounded allegations that deceased voters in New York had ballots cast on their behalf," the appendix says.

With 14 incidents that were only tweeted or retweeted about 35,000 times, Fox News (99.09% right spread) was cited for articles that "often presented factual evidence of a real-world event with an underlying subtext of election insecurity or widespread voter fraud that was picked up and made more explicit in the social media sphere."

Mainstream media largely got a pass on their inclusion in the top-20 domains list, with only "a couple" incidents of spreading "false or misleading information." They were dominated by left spreads, led by CNN (89.28%), Washington Post (84.76%) and The New York Times (63.88%).

Without further explanation, the Associated Press is listed with a right spread of 66.14%. It was among mainstream outlets that "falsely framed the motive and exaggerated the impact" of Republicans setting up "unauthorized voting boxes."

The report notes the two-way collaboration between the consortium and mainstream media organizations that went beyond briefings.

A New York Times reporter "spent Election Day co-located with EIP researchers" and "published an early piece about the emerging 'Stop the Steal' narrative," according to the report, while The Washington Post and CNN were used by consortium researchers for fact-checks.