School districts around Ohio's capital Columbus are reeling from undercover video of their employees discussing how they mislead parents who oppose critical race theory and related concepts into thinking schools aren't exposing their children to versions of those concepts.

This new batch confirms "parents are playing an endless game of Whac-A-Mole" as schools instill the tenets of CRT under a different name or hide content parents don't like in benign-sounding programs, President Adam Guillette says in narrating the video.

Guillette told Just the News AIM will divulge more hidden-camera clips Monday from school districts around Cincinnati, followed by Utah, then back to Ohio's Toledo, Cleveland and Dayton. The Texas revelations will start in two weeks.

Guillette sounds like the lead actor in the clips but didn't answer when Just the News asked. Asked how they presented themselves to meet with school staff, he wrote in an email: "Our investigative team uses a variety of ploys that vary from time to time."

"So whether you can pass a bill that you can't teach CRT in the classroom [is one thing], but if you didn't cover programming or ... extracurricular activities or something like that, that message might still get out," he says.

The administrator explains how the district responded when people asked if it was teaching CRT "in the curriculum," which Boaz called "a talking point ... from a certain news channel."

He pointed at an actor to confirm that person's suggestion that the district interpreted the question to mean "grad school stuff" — the theory pioneered by law professors Derrick Bell and Kimberle Crenshaw — at which point UA Schools would deny the curriculum included CRT.

"You didn't ask about the conversations in the hallway," Boaz said, while also denying those took place. But when pressed whether the district is really not having "conversation around ... the tenets" of DEI and social justice, Boaz affirmed that "those conversations are happening, absolutely."

If a parent complains that "privilege is a controversial topic" in the classroom, UA Schools won't deny that it's being taught, Boaz said. But privilege will "probably get discussed in 17 classrooms before somebody actually brings it in here" — implying parents will be too late to shield their children from such lessons.

"They're not going to be supportive if I lay out everything I'm going to do," Boaz says. "But if I talk to [parents] about doing this one thing in the name of supporting students, they probably won't have an issue with this one thing, and by the time we get that thing established, if I start talking to them about this one other thing, they don't realize that was two things."

The strategy is to avoid overtly "liberal" moves, Boaz confesses, even while effecting change so dramatic that after five years a parent might look back and ask, "What the hell happened?"

"We have some parents that ... don't fully understand," Groveport Madison Schools administrative assistant Hilary Staten says while chuckling in another series of clips. She uses air quotes to say school employees "trick them."

Staten explains that if the district wants to share "certain content" with students and there's "one word in the language" that upsets parents, the district will tell parents to "look at it from a different ... viewpoint, and then they're okay."

She says the district "focus[es] a lot" on SEL, which Guillette describes as a "Trojan horse" for CRT.

Groveport Madison has "incorporated a lot of [SEL] materials" using COVID pandemic federal funds, which also pay for a social worker and guidance counselor "in every single building," Staten says. She agrees with the actor that SEL was a good way to get DEI "into classes it might not normally be in."

Asked if Bexley City Schools would "close the door and teach what's right" if "stupid laws" got passed, Director of Employee Relations and Human Resources Melissa Klosterman-Lando said, "It's hard to predict ... but we would find parameters for which we could, absolutely." (The clip doesn't specify, but Guillette's narration says the subject is CRT bans.)

Staten tells the actor that Groveport Madison uses Newsela for "core content" like social studies as well as a "supplement for language arts."

"These radicals are being paid by your taxpayer dollars to deceive you," Guilette narrates, adding that the comments by Boaz make clear that parents are not "being dramatic or engaging in a slippery-slope fallacy" when they speak out.

UA Schools told Fox News the video was made under "false pretenses" but echoed Boaz in denying the curriculum itself included graduate-level theory.

The district is "committed to diversity, equity and inclusion," but CRT is "not part of the district's academic program," according to the statement from interim Superintendent Kathy Jenney. "The district follows the state learning standards and all laws in effect related to public education." It has not responded to Just the News queries about CRT in non-academic programs.

Groveport Madison invoked the specter of legal action against AIM for the undercover recording of Staten, telling Fox News it was reviewing "all available options" with legal counsel.

The AIM video "grossly and irresponsibly mischaracterized a conversation" last summer with an employee who thought she was talking to "new parents moving to the area," according to Groveport Madison, and the actor "manipulated the conversation" to get "sound bites" and then "removed those statements from context."

Just the News asked Groveport Madison for the context that's missing from the video and to specify its legal options. Ohio is a one-party consent state, meaning Staten's consent to be recorded is not legally required.

"It's been amusing" to see the districts "complain to the media that we 'deceived' them" when their own staff are on camera admitting to deceiving parents, Guillette wrote in an email. 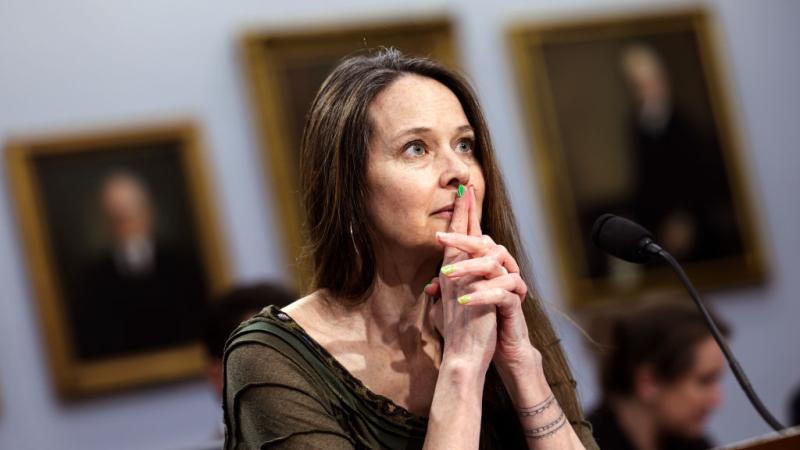