"We will be in a boatload of trouble when we see interest rate spikes," Democratic Rep. Dean Phillips says, referring to the interest costs on the national debt

A bipartisan group of lawmakers is warning that the national debt –– now estimated to total $85,210 per person –– poses an imminent threat, especially if interest rates spike.

The U.S. government has spent around $6 trillion during the coronavirus pandemic, in addition to regular government appropriations. The $6 trillion figure does not count the $1.9 trillion American Rescue Plan that President Biden signed a few weeks ago. The deficit set a record in FY2020 at $3.13 trillion. And the national debt has hit a record $28 trillion.

Maine Independent Sen. Angus King, a member of the Senate Budget Committee who caucuses with the Democrats, said that "we've got a problem" as a country with the rising deficit and national debt, particularly around the interest on the debt.

"I'm concerned about it in terms of generational equity, the long-term implications for your generation and the generation that comes after," King said during a discussion organized by the Millennial Debt Foundation. "And it bothers me from a, sort of, ethical point of view that where my generation is spending the money, spending your money."

According to the Treasury Department, interest payments on the debt totaled $522.7 billion in FY2020 alone.

"It's a cheap time to borrow and some people are using that as a reason to borrow. The problem that comes is our interest rates flow. The U.S. has the ultimate adjustable rate mortgage, which is the rates can change," King said. "And if the rates go back to 4 to 5%, which is where they've been historically, we're in a heap of fiscal trouble. The math is pretty easy. Every 1% is $250 billion a year of interest costs. So 4% is $1 trillion dollars; 5% is $1,250,000,000,000, which happens to be the entire current discretionary federal budget."

Minnesota Democratic Rep. Dean Phillips shared King's concerns about the billions of dollars, per day, that the U.S. is spending on the debt's interest costs alone.

"I read recently that John D. Rockefeller, in his era, could have paid off the entire United States federal debt with his wealth. Turn up the clock now to 2021, America's wealthiest man, Jeff Bezos, with about $180 billion in net worth, he could pay six months of our debt service; think about that," he said. "We will be in a boatload of trouble when we see interest rate spikes."

Phillips warned that "once foreign investors decide the United States of America is no longer the safest place to deploy their capital, all bets are off, no policy, no legislation, no monetary or fiscal endeavor, will correct that."

The Congressional Budget Office estimates that the debt will be 202% the size of the entire economy, known as the Gross Domestic Product (GDP), by 2051.

According to the Peter G. Peterson Foundation, the debt is $85,210 per person.

Phillips said the lack of term limits for members of Congress has contributed to the dire fiscal situation the U.S. faces right now.

"That's a pragmatic statement. Both parties own this. No party stands for fiscal responsibility right now and I think part of it is we don't have term limits. We have too many people who want to serve careers in Congress, rather than show up, do the hard work, the heavy lifting and then move on. I think until we have that change, it's going to be hard to find the critical mass willing to make the tough decisions. That's what we need."

Phillips called for a "Simpson-Bowles style commission" of some kind to "really not just investigate how we can solve this problem, but to have some teeth and some initiative and a requirement that we actually deploy some of the findings."

South Carolina Republican Sen. Lindsey Graham, ranking member of the Senate Budget Committee, said Congress needs to take on entitlement reform, given that there are trillions of dollars in unfunded promised benefits under Social Security and Medicare. He said the trust funds for those programs "begin to fail" in the next 10-15 years, which will cause Congress to "raise taxes or reduce benefits," absent entitlement reform.

Graham had a message for his colleagues in Congress.

"We can argue about each year's budget, and we're adding a lot to the deficit every year, I agree with that. But if you're going to fix this, you've got to go where the real money is at, which is entitlement spending over time and interest on the debt itself. If interest rates go up, like they're beginning to go up, the interest on the debt goes up, and it's going to be a pretty large portion of GDP just to service the debt," he said.

"The goal is not to get out of debt. The goal is to have a debt sustainable to GDP to lower the curb because as the baby boomers like myself retire, I'll be getting my Social Security check here in a few months. There's just a tsunami of us coming that's just going to crush, you know, the ability for the federal government to pay the bills," he also said.

Alabama Rep. Mo Brooks, who is running for the Senate, predicted that the debt will exceed $30 trillion by the end of 2021.

"We're going to blow through the $30 trillion debt mark sometime this year. And after a while, citizens' eyes tend to get a little bit glassy. Yeah, but they need to understand that American citizens are responsible individually for paying that entire debt and each citizens share, man, woman and child, even a newborn baby. Their share is $90,000," Brooks told Just the News this week.

"I want the American citizenry to ask themselves, can you write a $90,000 check right now? Okay, can you do it for your family of four? That's $360,000 Oh, wait a second. If you happen to be doing well enough to actually earn enough money to pay income taxes, then you've got to pay for all those who can't. So double it –– that $720,000 is the average debt burden of each family of four in the United States of America," he added.

Brooks said he hopes the $720,000 figure "impresses upon the American people as to how dangerous this is and how deep that debt is" right now. 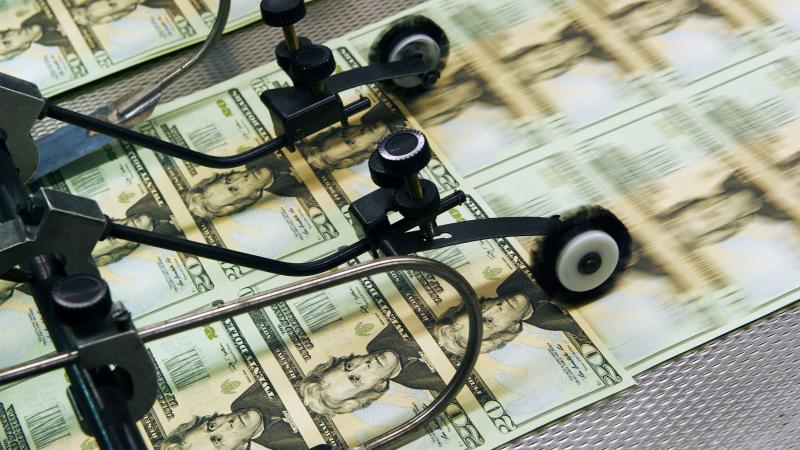 With 2 days until deadline to raise debt limit, Congress not in session, Biden not negotiating