Mother of seven disarms even her staunchest adversaries. 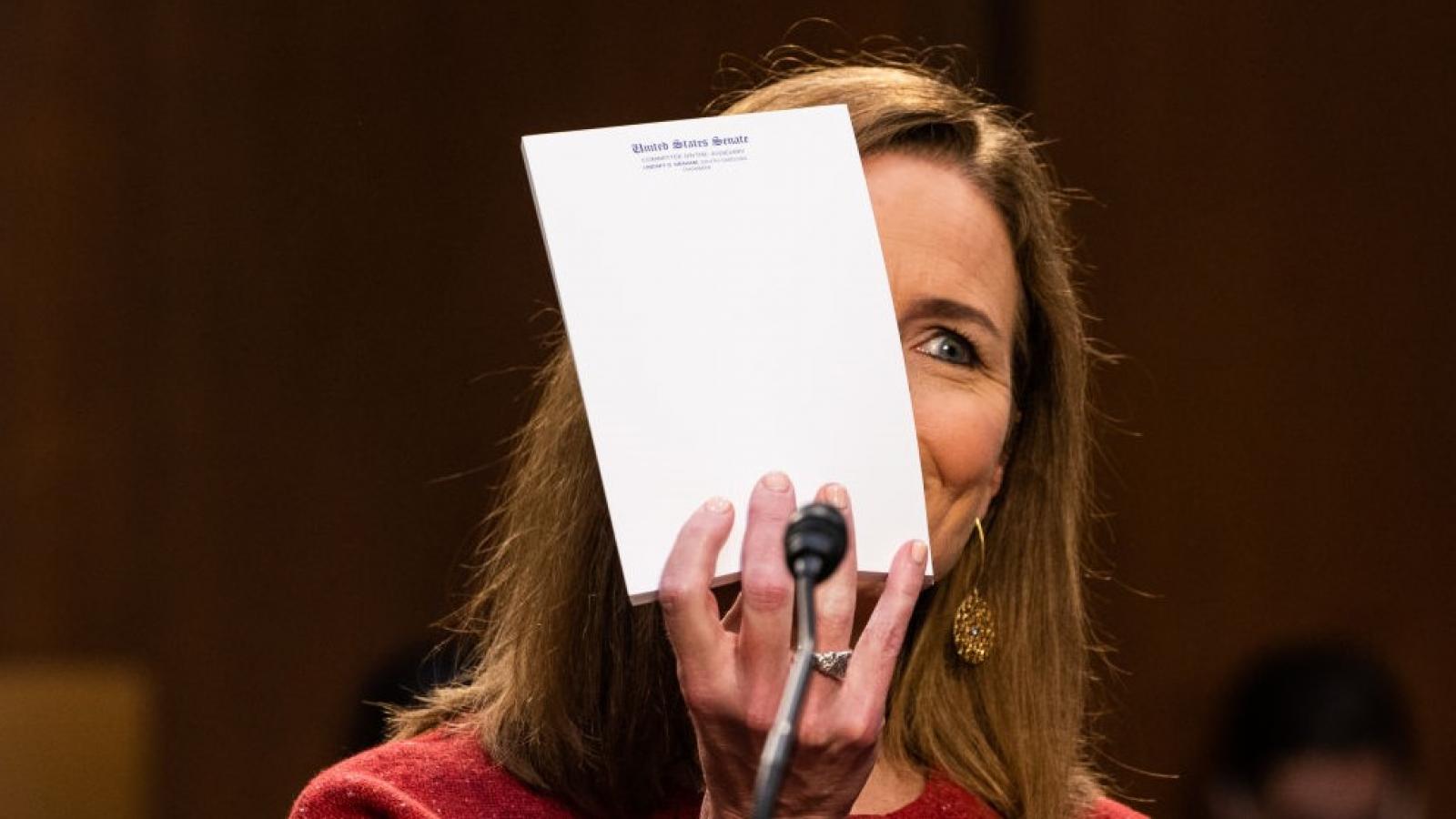 If you missed the two dozen hours of questions Supreme Court nominee Amy Barrett endured during her confirmation hearing this week before the Senate Judiciary Committee, it might be best summed up in one single moment.

A couple hours into her Day 2 cross-examination from angry Democrats and friendly Republicans, Sen. John Cornyn (R-Texas) asked the U.S. Court of Appeals Seventh Circuit judge about what notes she was using to deliver her expansive answers on numerous complex legal rulings.

"Most of us have multiple notebooks and notes and books, things like that in front of us," Cornyn said. "Can you hold up what you've been referring to in answering our questions?"

At that point, with a charmed smile, Barrett held up a notepad.

"Is there anything on it?" Cornyn said.

"The letterhead that says United States Senate," the judge said. The rest was blank. She hadn't written down a single thing, didn't have a set of notebooks arrayed on the table to peruse as she answered. It was all her brain.

That is, in a nutshell, the summation of the three days of hearings. Barrett extemporaneously expounded on endless rulings, explaining not just her own legal philosophy but pontificating on intricate precedents set by the highest court in the land -- always setting them in layman's terms.

Barrett, by all measures, appears set to sail through confirmation and take the seat left vacant by the death of Justice Ruth Bader Ginsburg, who died last month at 89. But remember, for Justice Clarence Thomas and Justice Brett Kavanaugh, the fireworks didn't begin until they had cleared the Judiciary Committee and their nominations went to the full Senate. So stay tuned.

Still, the current nominee escaped the committee hearing nearly unscathed, despite the deep desire of Democrats to ding her up, as they did with Thomas and Kavanaugh, whom they hit with unsubstantiated charges of sexual misconduct.

Barrett, a 48-year-old mother of seven, including two black children adopted from Haiti, proved a nearly unhittable target, a veritable Muhammed Ali. While senators — who literally talk for a living and often believe they're the smartest person in the room — Barrett, like the great boxer, was able to float like a butterfly, sting like a bee.

Without the standard fallback of sexual allegations, Democrats were left with targeting Barrett over the Affordable Care Act (ACA) — not exactly a sexy topic. Throughout the hearing, Democrats displayed photos of constituents, whom they claimed would suffer greatly if the program known as Obamacare were repealed.

A case on the ACA is set to come before the nation's high court on Nov. 10, and Democrat after Democrat accused Barrett of being prepared to kill the act.

The judge shot that down in one deft answer. She said that stripping away a single tenet of the act — as is at issue on Nov. 10 — need not invalidate the entire ACA. Citing "severability" — which means invalidating one part of a law without invalidating the entire law — Barrett invoked her mentor, the late Justice Antonin Scalia, for whom she clerked at the Supreme Court.

As background, before Amy Coney Barrett was a judge on the U.S. Court of Appeals for the Seventh Circuit, she was a professor of law at Notre Dame Law School, where she taught civil procedure, constitutional law, and statutory interpretation. That means that she spent her days with curious law students, turning eye-glazing legalese into understandable terms. She did the same throughout her hearing — again, without a single note.

And she did it, again, using the game Jenga to explain Obamacare.

"I think the doctrine of severability, as it's been described by the court, serves a valuable function of trying not to undo your work when you wouldn't want a court to undo your work," Barrett said. "Severability strives to look at a statute as a whole and say, would Congress have considered this provision so vital that kind of in the Jenga game, pulling it out, Congress wouldn't want the statute anymore?"

Barrett was so impressive that her nomination was widely hailed. "Voters support Judge Amy Coney Barrett's confirmation to the U.S. Supreme Court by a 17-point margin, and a slim majority believe she should be confirmed before the election, a new Morning Consult poll finds," Forbes reported. And that was even before the hearings began.

Near the end of Day 3, one Republican senator summed up the proceedings.

"As we have been sitting through these these discussions, I've heard a number of my colleagues bring up descriptive words to describe you," Sen. Joni Ernst, Iowa Republican, told Barrett. "I would like to review a few of those right now."

"Respect, intellect, character, jurisprudence, clarity, demeanor, humility, dignity, independent, exceptional," Ernst said. "I think that you are exactly what we should embrace, and as I look at future generations of men and women who might want to serve on our Supreme Court, I hope that they will espouse those attributions as well."