"China likely cares very little about whether its sailors have access to education opportunities or whether their marine spouses are able to transfer their work skills from one location to another," wrote Marine veteran Dakota Wood.

As America faces a range of growing security threats from abroad, concerns are mounting that the Pentagon's senior leadership is too focused on priorities other than deterring and preparing for war.

For some experts, a recent 1,141-word message to the Navy and Marine Corps crystallizes this issue.

The message, penned by Secretary of the Navy Carlos del Toro, was meant to tout his accomplishments after one year of being in charge of the Navy Department. He highlighted the Navy's progress on several issues: sexual harassment, mental health, education, housing, keeping personal costs down, child care, spouse employment, and the Exceptional Family Member Program.

Del Toro's one-year status report "talks about everything ... except sea power," wrote Heritage Foundation senior fellow and Marine veteran Dakota Wood. "He missed an opportunity to reflect on why we have a Navy in the first place, and the purpose, importance, and value of serving as sailors and Marines."

The message didn't address that China has the world's largest navy or that China is expected to have more aircraft carriers and amphibious assault ships based in the Pacific than the U.S. by 2025.

The U.S. Navy has also faced maintenance backlogs, ship collisions, and training accidents caused in part by strain on the current fleet to keep up with deployments. According to analysts, the service isn't well positioned to reorient the Marine Corps with new and more ships to face the military threat posed by China.

"Del Toro said nary a word about any of this in his 'year in review,'" wrote Wood. "The naval services must be prepared for war so that, when called upon, they will be able to defeat enemy forces in battle. China likely cares very little about whether its sailors have access to education opportunities or whether their marine spouses are able to transfer their work skills from one location to another. But they are increasing their warfighting capabilities at a rapid pace while the U.S. fleet dwindles."

Meanwhile, the U.S. Pacific Air Forces, which is tasked in part with deterring and preparing for conflict with China, has ordered its senior leaders and commanders to stop using gender pronouns such as "he" and "she," the Washington Free Beacon reported.

The military command also banned references to age and race, saying the language shift would help with "lethality" and "competition against near-peer adversaries," a term referring to China and Russia.

"We must embrace, promote, and unleash the potential of diversity and inclusion," read an email sent in May to senior leaders and commanders at the Andersen Air Force Base in Guam, which operates under the Pacific Air Forces.

The new order echoes what's become a key message from the Pentagon.

In June, for example, the Navy published a video training service members to use proper gender pronouns to create "safe spaces." The Army similarly trains its soldiers on gender identity.

Earlier this year, the Defense Department wrote that diversity, equity, and inclusion are "necessities" in the military and need to be "a consideration or a part of all decisions in the military."

Secretary of Defense Llyod Austin had a similar message last June when he testified before the House Armed Services Committee.

"Diversity, equity, and inclusion is important to this military now, and it will be important in the future," he said. "We are going to make sure that our military looks like America and that our leadership looks like what's in the ranks of the military."

Another military priority under the Biden administration has been climate change, which the Pentagon has declared a "national security issue" and a top priority integral to the military's planning at all levels — tactical, operational, and strategic.

The Pentagon brass have particularly focused on race, warning that white supremacists have made inroads into the military and promising to root them out. Austin made identifying and stamping out "extremism" in the services a top priority.

A Pentagon report from December found that "fewer than 100" military personnel were found to have engaged in prohibited extremist activity over the past year.

"White rage" has been a particular focus of Pentagon leaders, who have increasingly embraced the teaching of critical race theory within military ranks. CRT argues racism is entrenched in all systems of American society and all disparities between the races indicate racial discrimination.

At the same congressional hearing where Austin testified last June, the nation's highest-ranking military officer defended the study and teaching of CRT within the armed forces.

"It's important actually for those of us in uniform to be open-minded and be widely read," said Gen. Mark Millley, chairman of the Joint Chiefs of Staff. "I want to understand white rage."

"I personally find it offensive," said Milley, "that we are accusing the United States military, our general officers, our commissioned and noncommissioned officers, of being woke because we're studying some theories that are out there."

The U.S. Military Academy at West Point offers a seminar class on "white rage," and the Chief of Naval Operations recommends "How to Be an Antiracist" — a foundational text of CRT — on the official reading list of the U.S. Navy. The list also includes "The New Jim Crow: Mass Incarceration in the Age of Colorblindness and Sexual Minorities and Politics."

In late July, the conservative watchdog group Judicial Watch filed a Freedom of Information Act lawsuit against the Defense Department for records related to the U.S. Naval Academy for allegedly "implementing critical race theory in the training of naval recruits." The suit asks for emails and PowerPoint presentations discussing CRT ideas.

A month earlier, Judicial Watch said it uncovered over 700 pages of documents revealing CRT instruction at West Point, including some denouncing "whiteness" and suggesting blacks are in similar conditions today as slaves were before emancipation in the 19th century.

Military experts have warned the country's war colleges and service academies no longer teach warfighting. The curricula at these schools have for some 50 years taught soldiers to be "a diplomat, an economist, a scientist, a historian, and a lawyer," but not a warfighter, two professors and military historians at the U.S. Army War College wrote last year, arguing the military "no longer knows how to fight and win wars."

Beyond CRT, the military is struggling to combat the accusation that of some of its leadership appears increasingly political.

Milley recently came under fire for his silence after the White House said it deliberately placed Marines visibly flanking President Biden during his controversial speech in Philadelphia last week describing Donald Trump and "Maga Republicans" as threats to the country.

"Milley has said nothing about supplying not just the Marine Band but Marines to stand directly behind Biden at a political speech as he denounced his political opponents as threats to democracy and part of what he ... called a 'semi-fascist' movement," tweeted constitutional scholar Jonathan Turley.

The White House said the presence of the Marines was "intended to demonstrate the deep and abiding respect the president has for these service members ... and the unique role our independent military plays in defending our democracy, no matter which party is in power."

Turley noted that Milley had apologized for appearing in uniform in 2020 with then-President Trump in a march across Lafayette Square in front of the White House to a church that had been burned by Black Lives Matter rioters.

"My presence in that moment, and in that environment, created a perception of the military involved in domestic politics," Milley said at the time.

Milley reportedly told his staff that he intended "to fight [Trump] from the inside" and called his Chinese counterpart to tell him that Trump did not intend to attack China in the aftermath of the Jan. 6 Capitol riot.

Turley's observation about Milley came two days before several former defense secretaries and chairmen of the Joint Chiefs of Staff penned an open letter this week warning of an "extreme strain" on the relationship between the military and civilians caused by political polarization and other societal pressures.

The appearance of an increasingly political military could be one reason why recent polling has shown a sharp decline in public trust in the armed forces. And this breach of trust could be growing within the military as well.

"I have enormous confidence in our men and women that serve our great country down in the trenches ... but leadership matters," former acting Defense Secretary Chris Miller recently told the "Just the News, Not Noise" television show.

"There seems to be the starting of a break of trust between those that serve and the leaders that represent them and are supposed to be the role model for them," added Miller. "It's troubling to me, because we at the end of the day, we just need good character-filled, ethical leadership. And I think that's what we need to get back to. And I am concerned right now that we're not seeing it the way that we should expect."

At the same time, the military is facing an unprecedented recruiting crisis, with this year proving to be the worst for recruitment to the armed forces since the transition to an all-volunteer force in 1973. Applications to the service academies are also dropping. The Air Force is even considering changing its policy to allow recruits who fail a drug or alcohol test.

Experts and U.S. officials have cited a number of reasons for this recruiting crisis, from the fallout of COVID-19 to a growing disconnect between the military and civilians. According to some service members, however, there's another reason, too: the Pentagon's embrace of so-called woke policies and shift away from the military's core warfighting mission.

When reached for comment for this story, the Defense Department didn't address the allegation that it's too focused on priorities other than deterring and preparing for war. A spokesperson directed Just the News to contact the White House about the Marines' presence at Biden's speech and to contact individual branches of the armed forces for questions about recruitment. 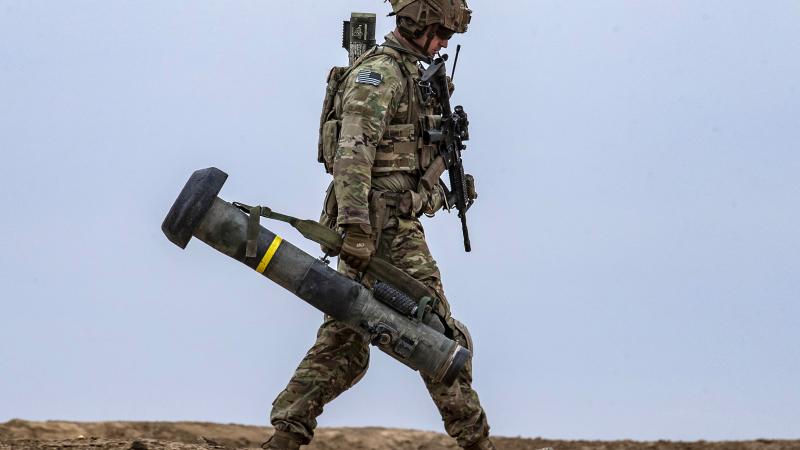 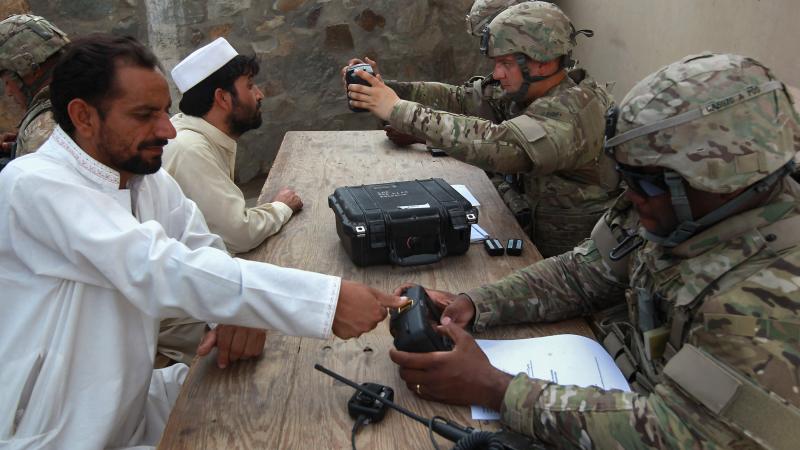