The University of Virginia's commitment to free speech — and its constitutional obligations — is facing scrutiny after it punished and censored students for offensive, hyperbolic or just contrarian remarks.

Founded by Thomas Jefferson in 1819 and widely considered a "public Ivy," the taxpayer-funded institution allowed a student-run committee to dangle expulsion over a student for a private remark that an administrative investigation found nonthreatening.

This spring it threatened to expel a student for a "Burn it all down" poster on her residence hall door that criticized the university using dark imagery, on the grounds that it constituted "incitement."

UVA also faces continuing litigation from a student removed from its medical school for "questioning and critiquing the theory of microaggression" during a panel discussion, as a federal judge ruled in allowing the First Amendment claim to proceed.

A hearing is scheduled for Aug. 23 on Kieran Bhattacharya's motion to file an amended complaint, the first in which he's represented by a lawyer. New details include UVA's alleged treatment of his speech "in a manner reminiscent of the infamous 'treatment' of dissidents in psychiatric hospitals in the former Soviet Union."

The Foundation for Individual Rights in Education, which secured a lawyer for Bhattacharya, is calling out UVA even though its written policies "nominally protect free speech" under FIRE's rating system. The "green light" designation is shared by about 12% of colleges surveyed in FIRE's last annual report.

The civil liberties group doesn't plan to change UVA's rating in response to the incidents or revise the wording of its "Take Action" button on UVA's page, which sends a prewritten email thanking the university "for its commitment to free speech," Director of Policy Reform Laura Beltz told Just the News in an email.

The "Take Action" email for green-light schools is intended to "encourage the maintenance of policies that do not infringe on free speech," she said.

Exasperated by a "Black Women Matter" demonstration last summer that illegally blocked the road through downtown Charlottesville, senior Morgan Bettinger pulled over to talk to a city employee whose dump truck sealed off the protest.

Some demonstrators misquoted her comment to the employee — "It's good that you are here or they could become speed bumps" — as saying they "would make good speed bumps," according to a letter from her lawyer to UVA President Jim Ryan.

The scene recalled the driver who ran over counterprotester Heather Heyer at the "Unite the Right" rally in Charlottesville three years earlier.

One of the protest organizers, UVA student Zyahna Bryant, recorded Bettinger as she backed away and parked. "It's a Karen!" Bryant, who is black, chants on the video, using the slur for white women. "Was she trying to drive through protesters?"

Taunting Bettinger as they started surrounding the car, Bryant and others shout, "We'll make good speedbumps?" and "Is that a threat?" They continue following her as she backs further away. Another video shows protesters taunting Bettinger as she allegedly calls the police from her car.

Bryant tagged UVA in the tweet thread, and Dean of Students Alan Groves was "inundated with angry messages demanding action" against Bettinger, her lawyer wrote. The activist filed charges with the student-run University Judiciary Committee (UJC) and administration-run Office of Equal Opportunity and Civil Rights (EOCR).

Despite finding that Bettinger's remark did not pose "an ongoing threat," Groves tasked the UJC with determining whether her words "constituted a true threat within the meaning of the law."

By the time EOCR exonerated Bettinger, finding her "speedbumps" remark was "not clearly threatening on its face," the UJC had already found her guilty of putting "members of the community at risk" because "you disregarded Charlottesville's violent history" — Heyer's death three years earlier.

Though she graduated this spring, the guilty finding remains on her record and must be disclosed at least to prospective graduate schools, her lawyer's letter to President Ryan says, asking for its expungement.

The UJC ordered her to perform "50 hours of community service at an approved social justice organization" and write an apology letter to Bryant, and promised to expel her if she committed any further purported violations, according to FIRE's warning letter.

UVA must revise its policy to remove the power of a "university-sanctioned student-run committee" to punish protected speech, the group said. "The fact that Bettinger made her comments in Charlottesville ... does not change the analysis," which is that the student made a protected "conditional statement" about a "hypothetical situation."

It's not UVA's first invocation of Unite the Right to justify infringing on students' speech rights, FIRE said, pointing to the university's defense of its removal of the "Burn it all down" poster from student Hira Azher's door this spring.

The notice on her door said the "potential for incitement" was greater because of the poster's placement on the "site of race-based violence in August of 2017," referring to Unite the Right participants marching across campus with torches. It also invoked the Jan. 6 U.S. Capitol riot.

The university threatened to expel Azher if she posted a similar message again and said its lawyer signed off on the analysis. It did not mention the Supreme Court's protection for speech that is not "likely" to incite or produce "imminent lawless action."

FIRE accused the university of willfully ignoring its founder's own words about watering the "tree of liberty ... with the blood of patriots and tyrants." Like Azher's poster, which compares the university to the Ku Klux Klan and Grim Reaper, Jefferson used "figurative and hyperbolic political rhetoric advocating for systemic change."

The university can't be seriously arguing that Azher wants passers-by to "raze the building in which she sleeps," FIRE said.

UVA's response insisted that using "words and images that encourage violence, particularly given the location in which [the poster] appeared," generated "security issues" that it was constitutionally permitted to regulate. The letter came from the director of housing and residence life — not UVA's counsel.

The university told Just the News it was preparing a response to FIRE's letter about Bettinger, which requested a response by close of business Tuesday. It didn't answer a question about Azher's threatened punishment in light of UVA's constitutional obligations.

As for Bhattacharya's ongoing lawsuit, UVA's original response made clear he was dismissed "after a series of incidents and repeated instances of erratic behavior that raised security concerns as well as questions about his professionalism and fitness to practice medicine," spokesperson Wesley Hester wrote in an email. 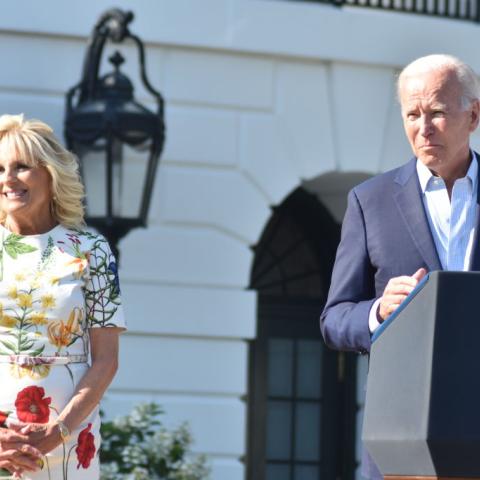