Numerous U.S. cities facing crisis levels of homelessness are shelling out millions of dollars to house local homeless populations in tent encampments, with per-tent costs in some cases rivaling the average monthly rent of the cities in question.

In a targeted response to homeless issues confronting the Los Angeles neighborhood of East Hollywood, city officials set aside a large parking lot with room for dozens of tents, which the city dubbed a "Safe Sleep Village." Residents there are reportedly given access to food, restrooms and showers, and services such as counseling.

That project has raised eyebrows for its reported price tag: A little over $2,100 per person per month, or very nearly the average cost to rent an apartment in Los Angeles.

That site falls within the jurisdiction of Los Angeles City Councilman Mitch O'Farrell. The councilman's office said he was unavailable for an interview regarding the project. Other members of the city council did not respond to requests for comment.

O'Farrell, meanwhile, told local media that the high cost of the temporary housing setup represented "an investment of people who deserve to be invested in."

"It's much less expensive to invest in an individual to get them on a pathway to wellness than it is to keep them homeless," he said.

Similarly high price tags have been reported farther north, in San Francisco, where the city is running its own safe sleeping project allegedly at a cost of around $5,000 per tent per month.

Media reports have indicated that the sites in both Los Angeles and San Francisco are being overseen to some extent by the nonprofit group Urban Alchemy. The San Francisco Chronicle also reported involvement from the nonprofits Dolores Street Community Services and Larkin Street Youth Services in the northern city.

Michael Clinebell, a spokesman for Urban Alchemy, confirmed that the group is involved in the tent villages in both California cities.

Clinebell declined to comment on the price tags associated with the facilities, instead directing Just the News to city officials in Los Angeles and San Francisco.

In an email on Thursday evening, San Francisco's Department of Homelessness and Supportive Housing said that the "Safe Sleep" program is "one of the lowest barrier programs in the Homelessness Response System" and that it "supports and attracts a high-acuity population that necessitates higher-levels of staffing to support guests in all situations including: overdose prevention and response, behavioral health and de-escalation, linkage to services, informal case management and overall site management."

"The total cost of the Safe Sleep Sites includes funding for [Urban Alchemy] to run security and case management services, meals, portable showers and toilets, and utilities at the sites," the agency said, adding that its present budget "reflects a $3m reduction from the Emergency Safe Sleep Program piloted to respond to the Coronavirus Pandemic last year."

'Lack of affordable housing' cited as cause

Outside of California, cities across the country are struggling to address a growing homeless problem and complaints from residents about the risks associated with the issue.

The matter was thrust into the national media spotlight recently when New York City Democratic mayoral candidate Andrew Yang delivered a sharp criticism of the city's handling of its homeless problem, particularly its handling of homeless individuals with mental health problems.

"Mentally ill homeless men are changing the character of our neighborhoods," Yang said during a debate between Democratic mayoral candidates. "Families are leaving as a result."

Yang argued that city residents and families "have the right to walk the street and not fear for our safety because a mentally ill person is going to lash out at us." He proposed upping the number of psychiatric ward beds in the city to ensure adequate housing for individuals with mental illnesses.

Yang's comments drew rebuke from his rival candidates as well as commentators and homeless advocates, with many arguing that his remarks were insensitive and lacked awareness of the underpinnings of the homeless issue.

Yet few are denying that the issue itself exists. Homelessness in the U.S. has increased steadily over the past few years; New York State ranks second nationwide for population-adjusted homeless levels.

Sarah Crean, a spokeswoman for New York City Councilwoman Helen Rosenthal, noted that the problem is not a new one and was ongoing even prior to the SARS-Cov-2 crisis.

"Homelessness has been a crisis here for many years, and was at historic levels before the pandemic," she said, arguing that "the central cause is our ongoing lack of affordable housing."

Affordable housing advocates have long argued that expensive housing is driving up the homeless rate. States that rank among the highest in cost-of-living metrics — including New York, California, and Oregon — also experience high levels of homelessness in their major cities, where the cost of living is likely to be amplified.

Portland, Oregon's largest city, is experiencing a persistent homeless problem, amid which residents have at times complained of "burning garbage" and "toxic smoke," among other issues.

The Cambia Portland Classic last month announced that it would move its LPGA tournament out of the city this year due to safety concerns surrounding a homeless encampment in the parking lot of the Columbia Edgewater Country Club, the originally scheduled venue for the event.

Sergeant Kevin Allen, a spokesman for the Portland Police Bureau, said the issue is "very broad" and "complex" and "takes a citywide response to address."

While noting that homelessness is "not a police issue," Allen said the bureau "does its part by addressing crime and certain public safety issues as they come up."

"But homelessness itself is not a crime," he continued, "and there is a comprehensive response that oftentimes does not involve officers at all. The pandemic has been a complicating factor for everyone, including our houseless community, outreach workers, shelter staff, and yes, police as well."

Yet the crisis is reaching severe levels in some cities, occurring alongside a spike in crime in many municipalities that critics claim is directly related to the soaring homeless rates.

In one video depiction that went viral, a shoplifter at a San Francisco Walgreens was seen casually loading merchandise into a giant garbage bag and biking out. The video footage includes what appears to be a security guard filming the shoplifting incident and allowing the thief to escape after languidly attempting to grab the stolen merchandise away from him. 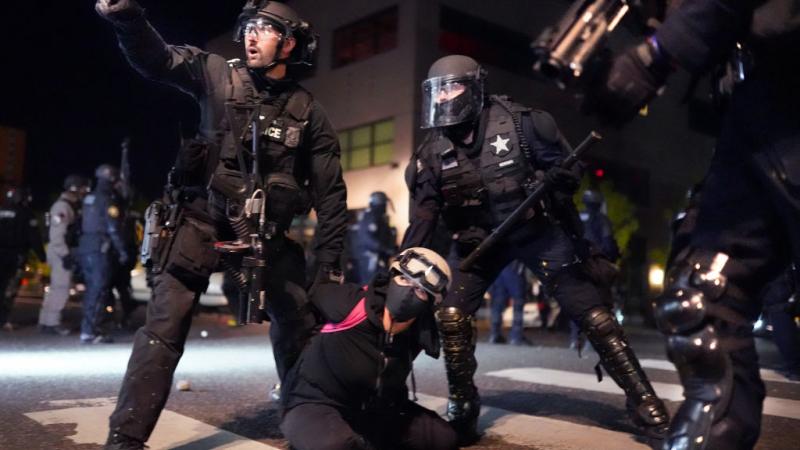 Portland ranked among 10 best cities in the U.S. after year of riots, homeless spike