From the start, the public health establishment has projected an air of certitude in its advice and policy prescriptions on COVID-19 belied by a record of error on many of the central questions.

Time and again throughout the coronavirus pandemic you've heard it. As public health authorities and state and local elected officials blanketed the nation with restrictions on public mobility and assembly, work and worship, they waved aside doubts and objections with the assurance that they were simply following the “data and the science”; this as if data are always complete, reliable, transparent and unambiguous, and scientific opinion is always monolithic, settled, and immune to challenge.

In reality, “the data and the science” pertaining to the new coronavirus have been partial, often ambiguous, sometimes arbitrary and misleading, even fraudulent — and continually shifting. Mistakes, of course, were inevitable when trying to understand and contain an unfamiliar, complex and highly contagious new virus. But when recurring expert error is coupled with an expectation that the public should mutely maintain an unquestioning faith in the claims of “the data and the science” — as has often been the case during the pandemic — the result may be a severe erosion in the credibility of public health authorities. Here are 10 things the public health establishment got wrong:

1. Threat level: On Jan. 21, the day the first COVID-19 case in the U.S. was confirmed, National Institutes of Allergies and Infectious Diseases director Anthony Fauci appeared on conservative Newsmax TV and said: “Obviously, you need to take it seriously and do the kind of things the CDC and the Department of Homeland Security is doing. But this is not a major threat to the people of the United States, and this is not something that the citizens of the United States right now should be worried about.”

By April 1, CDC Director Robert Redfield would be saying, “This is the greatest public health crisis that has hit this nation in more than 100 years.”

2. Masks: “Seriously people — STOP BUYING MASKS!” So tweeted Surgeon General Jerome Adams on Feb. 29. “They are NOT effective in preventing [the] general public from catching #Coronavirus, but if healthcare providers can't get them to care for sick patients, it puts them and our communities at risk!” The CDC initially said, “If you are sick, you should wear a facemask when you are around other people (e.g., sharing a room or vehicle) and before you enter a healthcare provider's office." But "if you are NOT sick," it added, "you do not need to wear a facemask unless you are caring for someone who is sick (and they are not able to wear a facemask).” That link now leads to the declaration with a subheading in large letters: “Cover your mouth and nose with a cloth face cover when around others.”

3. Asymptomatic transmission: Dr. Maria Van Kerkhove, head of WHO’s emerging diseases and zoonosis unit, said at a June 8 news briefing, “From the data we have, it still seems to be rare that an asymptomatic person actually transmits onward to a secondary individual,” adding, “It’s very rare.” She explained the importance of this for policy purposes. “What we really want to be focused on is following the symptomatic cases,” Van Kerkhove said. “If we actually followed all of the symptomatic cases, isolated those cases, followed the contacts and quarantined those contacts, we would drastically reduce” the outbreak.

After a backlash that “sent shock waves throughout the world”, according to a CNBC report and sparked a “furious scientific debate,” according to The Washington Post, Kerhove executed a 180 within a day. “We don’t actually have that answer yet,” she said. “I wasn’t stating a policy of WHO or anything like that.”

4. Mortality rate: WHO’s initial mortality rate for COVID-19 was 3.4%, more than an order of magnitude higher than seasonal flu, which is usually pegged at about 0.1%. But recently the CDC put its “best guess” figure at 0.26%. That's still higher than the seasonal flu but far lower than the 0.67% death rate of the “Asian flu” of 1957-1958 (H2N2), which, according to the CDC, killed an estimated 223,000 Americans and 3 million worldwide adjusted to today’s populations. That pandemic led to no panic in the U.S., no suspensions of civil liberties, no worldwide recession.

5. Death toll models: The most influential prediction of COVID-19 deaths was British epidemiologist Neil Ferguson’s unpublished model forecasting as many as 2.2 million American deaths and 510,000 in the U.K. Around the globe, countries quickly locked down to prevent the disease from overwhelming their health care systems and exacting almost apocalyptic death tolls. As soon as they had, the Imperial College professor said the U.K. figure was actually closer to just 20,000 with the equivalent being 80,000 U.S. deaths. Defenders claim that if you read the fine print in Ferguson’s model, he technically allowed for that under an essentially perfect case scenario. But Ferguson walked back his alarmist projection on March 25, just two days after the U.K. locked down, and therefore long before the authoritarian measures could have had any impact. In yet another flip, Ferguson now says locking down a week earlier could have prevented half the actual U.K. deaths. He has published nothing to support that assertion.

6. Cause of death: Initially there were no tests for COVID-19, so it’s understandable that there might have been confusion, especially between coronavirus and flu that was in season at the same time. But after tests became available, both the WHO and the CDC issued advisories saying that no test was necessary to officially certify a death as COVID-19-caused. Then, Medicare began providing a 20% bonus for putting COVID-19 on the first line of the death certificate, which is quite important given that most U.S. coronavirus deaths are in persons over age 65. Ultimately, anything from lethal alcohol poisoning to homicide were being classified as coronavirus deaths. Moreover, it is inevitable that many of those dying with the virus actually died from something else, given that the vast majority of those dying with a positive COVID-19 test had at least one, and usually more, preexisting conditions, or co-morbidities, that could have been the direct cause of death. The CDC has found that only seven percent of American deaths attributed to COVID-19 didn’t have preexisting conditions, while in Italy a study found merely one percent didn’t.

7. Ventilators: New York City, we were told, was about to face a “bullet train” to use Andrew Cuomo’s awkward metaphor. That is, based on modeling by the Institute for Health Metrics and Evaluation at the University of Washington, the city by early April would have more than 70,000 hospitalized with COVID-19. The actual number proved to be less than a fourth that. Even today, the cumulative total is still about 16,000 cases shy.

With such huge numbers, Cuomo said there would be a tremendous shortage of ventilators. As many as 40,000 would be needed, he claimed, saying on April 2 that the state would run out of ventilators by within 6 days at the prevailing usage rate. President Trump disputed that, saying “I don’t believe you need 40,000 or 30,000 ventilators.” By April 6, Cuomo was conceding, “We’re OK, and we have some in reserve.” By the middle of the month, Cuomo was sending surplus ventilators to other states.

8. Surface Spread: Originally, on its “How Covid-19 Spreads” page, the CDC had “Spread from contact with contaminated surfaces and objects” under its own subheading, just below a similar subhead on “Person-to-person spread.” Now it’s tucked away under the subheading “The Virus May Be Spread in Other Ways.” The CDC could have admitted that its understanding of transmission mechanics has changed with new studies. Instead, it took a tip from a John Wayne character: “Never apologize, Mister; it’s a sign of weakness.” “Our transmission language has not changed,” CDC spokesman Benjamin Haynes told NPR. Narrowly speaking, he is right, but ... you be the judge.

9. Hydroxychlororquine: You can’t rush good science — a lesson for those speculating about a speedy and highly effective COVID-19 vaccine. That’s what we saw with HCQ. President Trump gave the drug, used for treating malaria and autoimmune diseases, a boost, based on limited evidence that it might have been effective against SARS. Individual physicians told reporters that they “thought” the drug seemed effective, which doesn’t mean much given that the vast majority of COVID-19 patients recover in any case.

But whether because Trump was prematurely promoting the drug or because Trump is Trump, there seemed a concerted effort to disprove him. The highlight was when one of the world’s most respected medical journals, The Lancet, published a paper leading to such headlines as “Hydroxychloroquine: Trump’s Covid-19 ‘cure' increases deaths, global study finds.”

Within days three of the four authors published a retraction. Outside scientists had noted that the study claimed to have data that would have been almost impossible to gather during that time frame. The writers explained in their retraction that those figures came from a fourth author, who, tellingly, would not let them access the raw data. Additionally, the New England Journal of Medicine also retracted a study on COVID-19 and cardiovascular health since it also used data from the same company.

The latest: The drug doesn’t seem effective as a COVID-19 treatment, but there’s still hope it can be used as a prophylaxis.

10. Cruise ships: Ocean cruise liners go back to Noah’s Ark, but there’s talk they may not survive COVID-19. Or, perhaps, whatever new pathogen eventually emerges and throws the world into another panic. Carnival, the world’s largest cruise company, is bleeding out at a rate of $1 billion a month to maintain its fleet. That may not have been the case if there were just one narrative that everyone stuck to. Asked about cruises in a March 8 press conference,  Fauci said, “If you are a healthy young person, there is no reason if you want to go on a cruise ship, go on a cruise ship. But the fact is that if you have … an individual who has an underlying condition, particularly an elderly person who has an underlying condition, I would recommend strongly that they do not go on a cruise ship.” Then, the U.S. State Department flipped the script with a warning starkly different in tone and emphasis: “U.S. citizens, particularly travelers with underlying health conditions, should not travel by cruise ship.”

Photographer who took pictures in Del Rio says of Border agents: 'never seen them whip anyone' 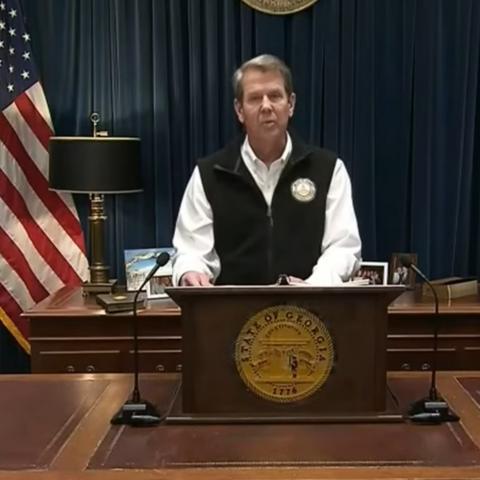 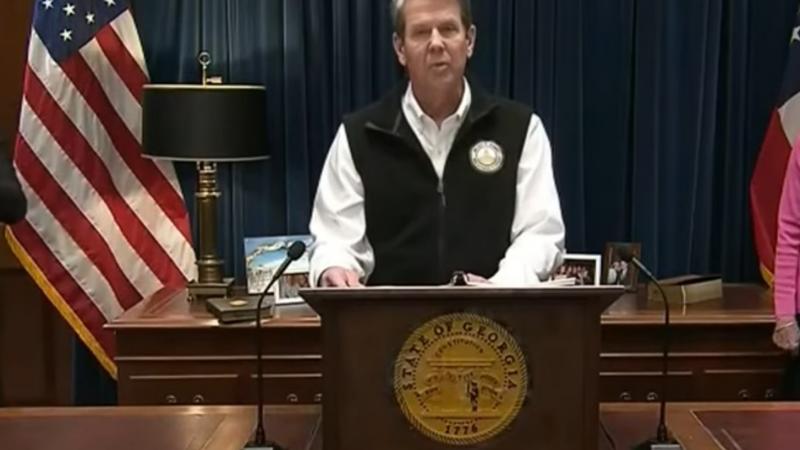 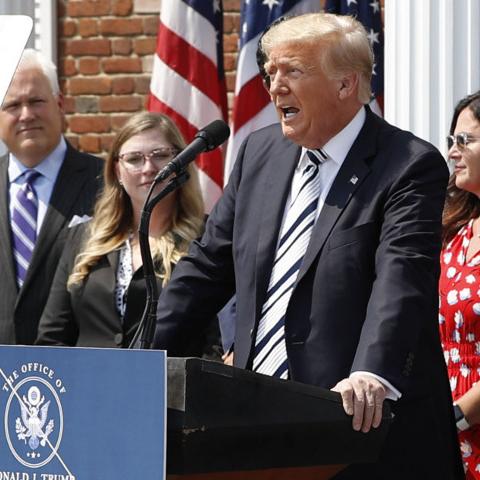