Teacher sues district for demonizing whites after federal investigation sputters to a halt.

At the tail end of the Trump administration, the Department of Education's Office for Civil Rights (OCR) wrote a "letter of findings" to a suburban Chicago school district.

The district gave "explicit direction" to staff to consider a student's race in disciplinary decisions, and told principals to consider the race of applicants for "building-level, paid facilitators," among other racially driven actions.

OCR told the district how to resolve the violations. Unfortunately for Stacy Deemar, the white drama teacher who filed the federal complaint, the district told the New York Post in March the newly inaugurated Biden administration suspended the case. The Department of Education would only say the case was "open."

Deemar is hoping a federal judge will see the matter the same as the Trump administration, alleging in a new lawsuit that District 65 teaches students and teachers "not only how to be racist, but that they should be racist."

She claims "race-based programming has overtaken" the district in recent years, "perpetuating divisive stereotypes" that pit teachers and students against each other based on skin color.

For example, Superintendent Devon Horton told The Wall Street Journal last fall, referring to teachers, "If you're not antiracist, we can't have you in front of our students." One component of antiracism is treating people differently based on race to remedy past and allegedly ongoing discrimination.

The district is in line with prevailing political sentiments in Evanston, according to the Journal. The home of Northwestern University created the nation's first reparations fund for black residents in 2019.

Deemar's suit includes a handful of materials used in lessons or other district communications. One shows a devil cartoon holding a "contract binding you to WHITENESS," while Black Lives Matter Week materials declare, "Your 5 year old is already racially biased" and instruct third through fifth graders to "disrupt the Western nuclear family dynamics."

District 65 is violating constitutional equal protection guarantees and Title VI of the Civil Rights Act, the suit claims: "State-sanctioned discrimination is an impermissible means of promoting even the most laudable goals."

OCR's investigation last year wasn't the first time the feds scrutinized the district's practices on race. Peter Kirsanow, a member of the U.S. Commission on Civil Rights, warned the district in 2018 that "segregating faculty meetings through affinity groups" was unlawful, the suit says.

The Foundation Against Intolerance and Racism, co-founded by black intellectuals including Columbia University's John McWhorter and Brown University's Glenn Loury, cheered the lawsuit and features Deemar on its "Profiles in Courage" page.

The school district was "made aware" of Deemar's suit but "has not yet been served with the lawsuit nor evaluated its claims with the Board of Education and legal counsel," district spokesperson Tyler Hughes wrote in an email. He didn't know when the district learned the federal investigation was suspended, and the Department of Education did not respond to a request for the status of the case.

The district was in the news earlier this year when a lesbian school board member claimed she was the victim of a hate crime. Police recovered a Christmas card with a homophobic slur placed in the board member's car, an incident captured on a private security camera, but closed the investigation without identifying a culprit.

The allegedly discriminatory effort started in 2015 with a five-year strategic plan designed to implement "equity" in schools and classrooms, specifically citing achievement gaps by race, income, disability and language barriers.

Deemar first objected to the nascent training in 2016 at a department meeting, but stayed quiet after her colleagues responded negatively. She was moved to file an OCR complaint after a teachers' union leader promised to "wield my metaphorical machete at white privilege" in a districtwide email.

The district started forcing teachers to undergo "antiracist training" in 2017, requiring them to acknowledge that whites are "controlling" and white identity is "inherently racist" and to participate in racially segregated activities, the suit claims. The same year, it released a report denouncing "racial equality" for treating "everyone in exactly an identical manner."

Following training, teachers were required to teach students what they had learned, including that "color blindness helps racism" and black people "feel pressure to assimilate ... to become more like White people." Teachers were also told to pressure students to sign antiracist pledges and participate in affinity groups and privilege walks.

The district uses "Courageous Conversation" materials from a private educational consultant in its mandatory training going back to the 2018-2019 school year, the suit claims. A professor in Washington state was placed on paid leave and investigated by her private college for nine months for criticizing the same materials, which were used in a mandatory white-only diversity training.

Deemar said the district forced pre-kindergarten through fifth grade teachers to "read aloud" to their students the book "Not My Idea," which includes the cartoon of the devil with the whiteness contract. Fifth grade teachers were ordered to make the most divisive statements to their students, including that "White people have a very, very serious problem" and the slogan "Love conquers all" is racist.

The suit is asking for nominal damages, attorney's fees and ongoing court supervision over the district to ensure it takes "all affirmative steps necessary to remedy the effects of the unconstitutional, illegal, discriminatory conduct" and prevent it going forward.

One question left unanswered in the suit: when OCR's undated letter of finding was sent. Kimberly Hermann at the Southeastern Legal Foundation, which is representing Deemar, wrote in an email the group doesn't have "the actual date" but "I understand it was sometime around January 5th-8th."

Carol Ashley, the OCR official who wrote the letter and returned to private practice this spring, declined to answer when she sent it, directing Just the News to the Department of Education.

Las Vegas says it will offer teachers up to $2,000 to stay in the classroom amid COVID surge

'This is not Chicago': NYC Mayor Eric Adams says schools will not close 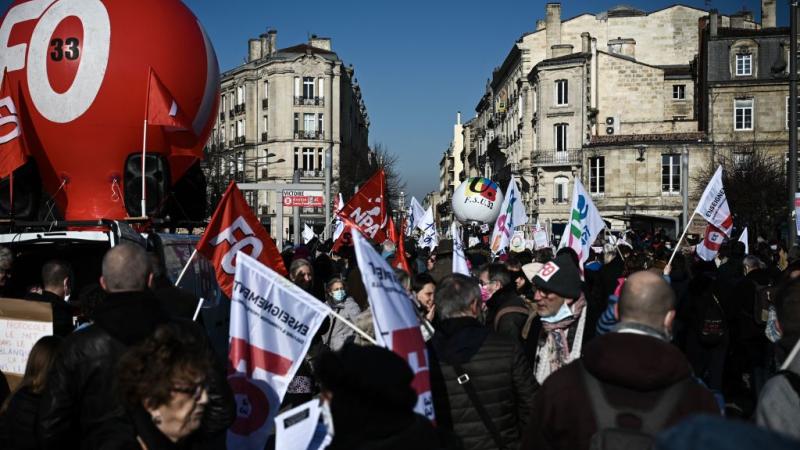 Teachers in France go on strike over handling of COVID-19 in schools, classrooms