Why do younger black voters like Trump more than elders? UCLA study explains

'Because they're tired of hearing the same stories about victimhood, racism, and zero answers that the left has been giving for years,' said black conservative activist Rob Smith. 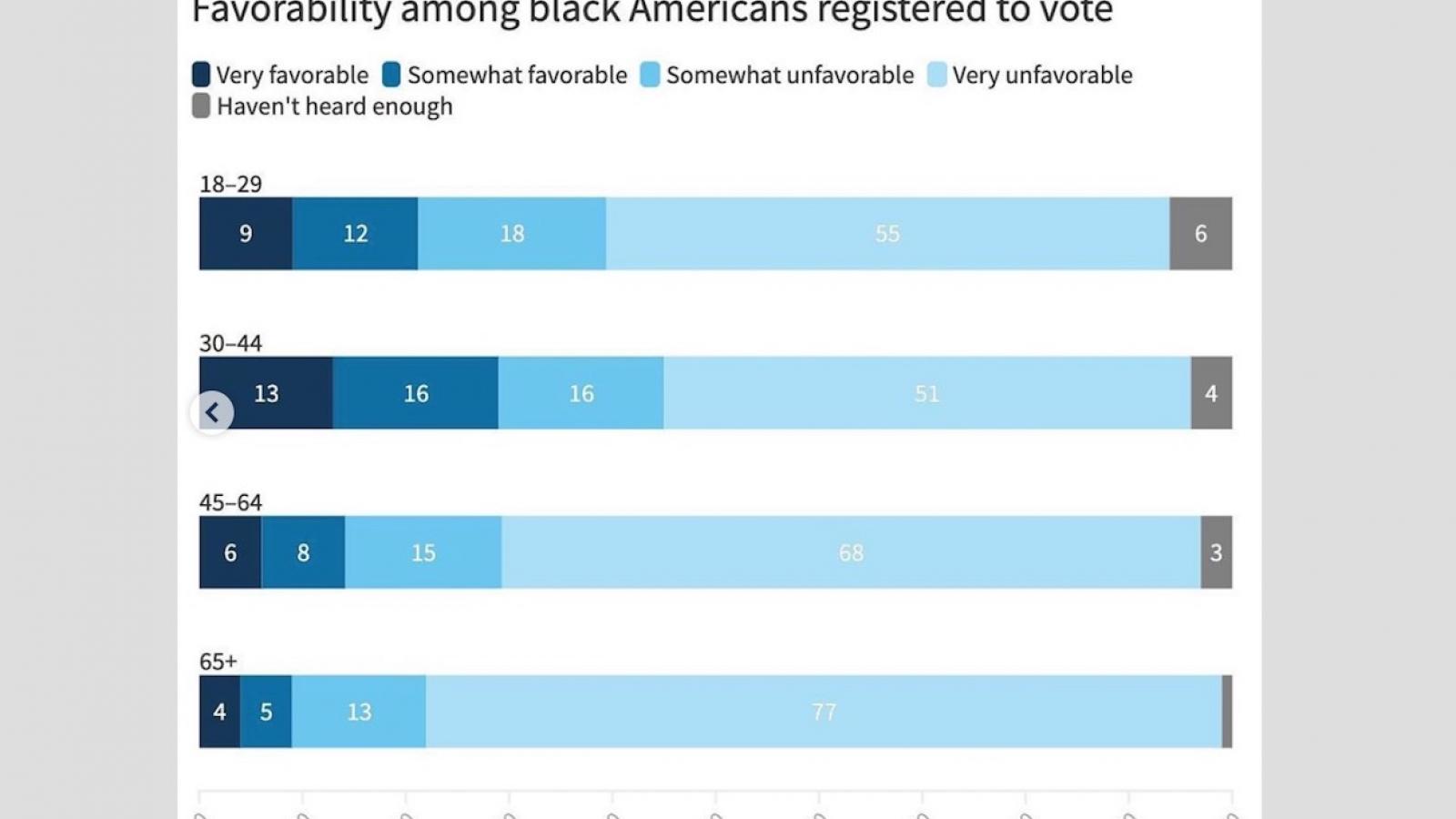 UCLA data collected just prior to the protests about the death of African-American George Floyd show younger black  Americans have been holding more favorable views of President Trump than their parents and grandparents.

The data collected from April 2-May 13 by the Democracy Fund + UCLA Nationscape project, an initiative that conducted weekly surveys of thousands of potential voters for nearly a year, found that 29% of percent of black voters ages 30-44 and 21% ages 18-29 have a "very favorable" or "somewhat favorable" view of President Trump. This compares to just 14% of black voters 45-64 and 9% of those 65 and older.

"Trump symbolizes a much broader understanding than just his personality, what he represents," veteran black empowerment activist Bob Woodson told Just the News. "I think that our younger people are realizing how they have been taken for granted by the Democratic Party and Democratic philosophy, and therefore are really open to alternatives."

Woodson cited as evidence of this new trend the 2018 Florida gubernatorial race, where white Republican Ron DeSantis won by only 32,000 votes over the black Democrat in the race, Andrew Gillum.

"And that's because 100,000 low-income blacks voted for DeSantis, even though Gillum had Obama and Oprah campaigning for him," Woodson said. "And that is because of DeSantis' position on choice in education and charter schools. So I think you're seeing a more independent strain through younger blacks who are able to look beyond the ideology and the personality and make decisions more on objective reasons to vote for people."

The study also found that Democratic presidential candidate Joe Biden is in a weaker position with younger black voters than Hillary Clinton was in 2016. Woodson said he thinks this is in part because Democrats have focused too much on racial issues.

"They're willing to look at the content of the issues that have nothing to do with race, but having to do with practical applications of policies like education, entrepreneurship, there's just more of an openness to look beyond race," Woodson said. "Because blacks have been duped over the past 50 years by Democrats and liberals to only look at life through the prism of race and partisan politics. And I think that represents a break with that."

Woodson said part of the differing generational views could also stem from the fact that data shows younger black Americans are less likely to work for the government than their parents.

"Two out of 10 whites with college degrees works for the government, but six out of 10 blacks, Woodson said. "And that is becoming less true. So they tend to be anchored in a service sector that needs low-income people in order for them to maintain their careers. So you have some structural reasons why older blacks are more supportive of Democratic policies than younger blacks, I don't think they are going into government the way their fathers and mothers did."

Toure, a popular, progressive African-American media host and writer, emphatically disagrees with Woodson, dismissing the premise of any significant variation or nuance within black opinion on Trump.

"This is absurd," Toure said in an email to Just the News. "The overwhelming majority of black people feel that Trump is an enemy and an existential threat to our lives. He will get a record low number of black voters."

Antjuan Seawright, a senior advisor to the Democratic National Committee (DNC) who also advised the Clinton campaign in 2016, told Just The News he wasn't worried about one snapshot in time in a single survey, especially given the unique context of the 2020 news cycle, when younger people might not be as focused on a presidential election as they had in years past. To date, the 2020 news cycle has been consumed by COVID-19 coverage and racial tensions. Seawright said he expects younger people to focus more on the election as it draws nearer.

"In the 24-hour news cycle, with information coming at you fast — true or not true information — it can perhaps dictate what you may say to someone in a moment," said Seawright. "But as long-term you look at the history of what Donald Trump has done, what he has said, and his body of work as it relates to issues that matter closely to people of color, I think that you can probably find those same statistics to say the opposite when it comes to young people of color."

However, this shift recorded among younger black Americans toward Trump happened even after the high-profile deaths while in police custody of African-American males Michael Brown, Tamir Rice, Freddie Gray, Eric Garner and others.

"Because they're tired of hearing the same stories about victimhood, racism, and zero answers that the left has been giving for years," Rob Smith, a prominent black conservative activist and spokesman for the youth-oriented non-profit Turning Point USA, told Just the News.

Smith said he did not anticipate this shift toward Trump among younger blacks would stop in the wake of protests after the Floyd case.

"Probably not, because Trump doesn't have anything to do with the Floyd case, and most smart people realize that," Smith said.