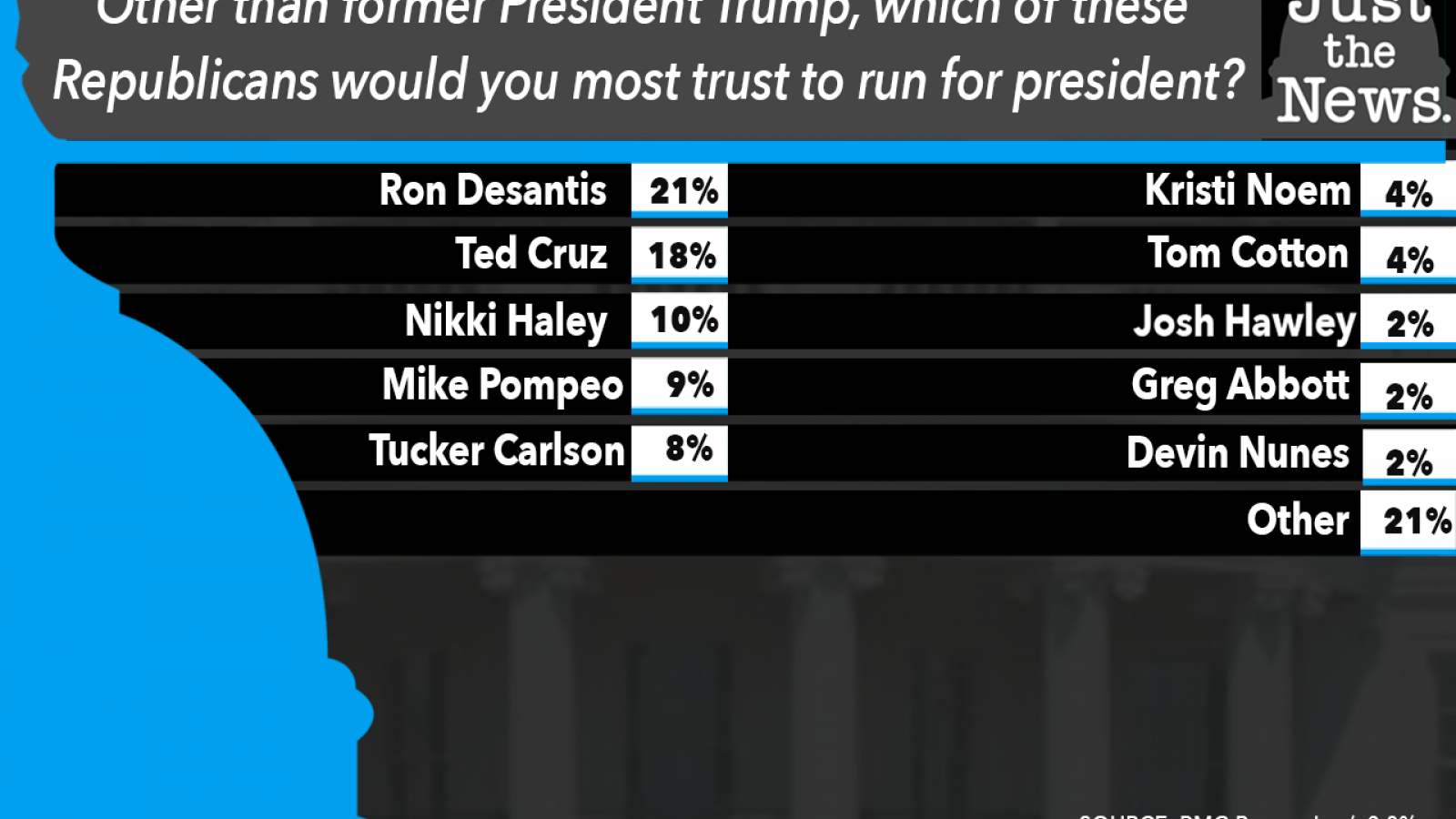 Florida GOP Governor Ron DeSantis places first among a list of potential contenders for his party's 2024 presidential nomination in a new Just the News Daily Poll with Scott Rasmussen, confirming his recent surge in popularity among Republican voters.

DeSantis finished with 21%, followed by Texas Sen. Ted Cruz with 18% and former U.S. Ambassador to the U.N. Nikki Haley at 10% in the future-leaders poll of registered Republicans. The poll excluded the GOP 2020 ticket of Donald Trump and Mike Pence from its list of options.

Defying COVID-19 groupthink and pushing back against Big Tech censorship of conservative voices, the independent-minded Florida governor has gathered early momentum in the preliminary jockeying for position as heir to the leadership of the now-dominant Trump wing of the GOP and a place on the party's 2024 presidential ticket.

The Florida governor's rapid rise into the top tier of potential GOP presidential contenders was illustrated by his showing in the CPAC straw poll on Sunday. In the poll of conservative activists attending the annual conservative summit in Orlando Feb. 25-27, DeSantis finished second (among 21 listed choices) to former President Donald Trump (55%-211%). Without Trump included, DeSantis took first place by a commanding margin over the second-place finisher, South Dakota Governor Kristi Noem (43%-11%).

DeSantis' first-place finish in the Just the News poll of registered Republican voters demonstrates broader appeal within his party beyond the conservative activist base represented at CPAC.

After weathering ridicule for a jaunt to Cancun in the midst of a historic winter freeze paralyzing his hike state of Texas, Cruz finished a respectable second in the new poll. Finishing third with 10%, former South Carolina governor and Trump cabinet member Haley demonstrated some residual core support within the GOP after losing favor within the Trump wing for telling an interviewer the former president "let us down."

Finishing just behind Haley in fourth place, respectively, were Trump administration Secretary of State Mike Pompeo at 9% and the only non-politician on the list Fox News anchor and populist champion Tucker Carlson.