From sanctions to slowing U.S. investment, Trump is making China the new evil empire just as the election-year battle for blue collar votes heats up.

Donald Trump, who earlier this year took out Iran's longtime military chief in a drone strike, is acting like a wartime president again. But this time there isn’t any need for artillery.

Instead, he is moving with a speed and ferocity seldom seen in diplomacy to punish Communist China for its record of human rights, military aggression and economic harm.

The president added two more volleys on Tuesday during a Rose Garden event, this time to protest China's crackdown on the once autonomous city of Hong Kong, one of the Far East's economic jewels.

Over the last few months, he has taken nearly a dozen actions ranging from cutting off American investments in Chinese state companies to refusing to acknowledge Beijing has any territorial rights over the South China Sea.

And while primarily security policy issues, Trump and his team have used the diplomatic crusade against China to reeducate Americans about the evils of socialism, communism and human rights abuses that some on the far left have recently embraced.

For some experts, it's an onslaught that is good for America's security and good for the president's re-election standing with blue collar workers and middle-class workers who saw the devastating impact of China's economic warfare on their jobs and income over the last two decades.

"People have got to turn to and get on top of this and get back to what won in '16, at least these economic issues," former Trump strategist Steve Bannon told Just the News recently.

Michael Pillsbury, Hudson Institute scholar and influential outside China adviser to Trump, said the marked increase of pressure by Trump on China — particularly to move critical supply chains back to the United States from Asia — has forced Beijing to show its hand.

China, he said, is most worried the United States may soon decouple the two superpowers' economies, and that gives Trump leverage in future negotiations.

"This is quite a tip from China that they are afraid of decoupling," Pillsbury told Fox Business anchor Lou Dobbs recently.

The United Kingdom, for instance, this week chose to ban the Chinese technology giant Huawei from its 5G networks. It followed two months after Trump targeted Huawei.

On Tuesday, Trump signed the Hong Kong Autonomy Act passed by Congress recently and issued an executive order ending special U.S. treatment that had been afforded to Hong Kong, saying his goal was "to hold China accountable for its oppressive actions against the people of Hong Kong."

Trump said the law "gives my administration powerful new tools to hold responsible the individuals and the entities involved in extinguishing Hong Kong's freedom" while the executive order ended preferential trade and policy treatment for Hong Kong that was never afforded to Beijing.

"No more special privileges, no special economic treatment and no export of sensitive technologies," Trump explained.

The actions on Tuesday followed one day after his National Security Adviser Robert O’Brien accused China of "horrifying suppression" in an op-ed sharply criticizing China's inhumane treatment of its largely Muslim Uyghur minority.

O'Brien singled out inhumane concentration camps, invasive surveillance and other tactics, and in a twist not lost on election year politics, linked such abuses to socialism and communism.

"The details of the CCP's anti-Uighur campaign are heartbreaking, but they reflect the Marxist-Leninist disdain for individual human beings," he wrote. "Whenever Chinese people dare defy the party by asserting their individual humanity, they stop being useful to the state and become a problem to solve the only way the CCP knows how: suppression and coercion."

The op-ed followed just a few days after the administration issued sanctions against several Chinese officials, including a senior member of the Communist Party, over the abuses of the Uyghurs.

The president also recently used executive action to stop the federal retirement board responsible for military and government pensions from investing in Chinese state companies. And his security team has warned the pension board for rail workers it is risking national security with investments in China.

While China increasingly gets painted as the new evil empire by his administration, Trump himself is escalating his attacks on Joe "Beijing" Biden's record with China.

The president used the Rose Garden event to unleash an epic attack on Biden on Tuesday.

"So Joe Biden and President Obama freely allowed China to pillage our factories, plunder our communities and steal our most precious secrets," Trump said. "I've stopped it largely."

Biden responded almost immediately, making clear both camps see China as a key issue for the working and middle-class voters.

"What we heard in the Rose Garden today wasn't a president at all," Biden's campaign said. "It was a politician who sees his reelection slipping away from him and who is furious that his own botched response to the coronavirus pandemic has denied him the campaign events he so craves." 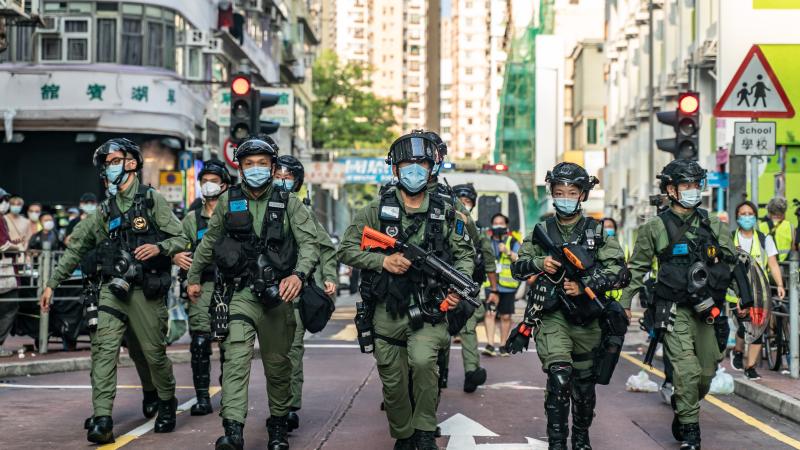