As U.S. observers increasingly see Tehran's hand in the escalating violence in Gaza, Iranian state media reported that the top Quds Force commander on Saturday pledged full support to Hamas in its fight against Israel.

General Esmail Qaani, who succeeded Qasem Soleimani as head of the elite branch of the Islamic Revolutionary Guards Corps (IGRC), affirmed the support in a May 15 phone call with Hamas leader Ismail Haniyeh, who thanked Iran for the patronage.

The fight against Israel belongs not just to Hamas, but also to the entire Islamic world, Qaani said, according to Iran's Al-Alam television channel.

The declarations come amid fresh observations from experts who note the extent of Iran's help to the group that has been designated by the United States, the European Union, and others as a terrorist organization.

"Iran is a major sponsor of Hamas," said Michael Oren, Israel's former ambassador to the United States. The sponsorship is designed to enhance Iran's complex machinations in the region, Oren said while appearing last week on the John Solomon Reports podcast.

Iran wants Israel to be bogged down in a ground war in Gaza, Oren said, in order to force Tel Aviv to turn away from regional problems involving Tehran.

"They're willing to fight Israel to the last Palestinian, they don't care," Oren said, adding that "it detracts Israel's attention from Iranian efforts to transform Syria into a forward military base against us." Additionally, he said: "It takes pressure off Iran in the Iran nuclear talks going on in Vienna."

Former U.S. Secretary of State Mike Pompeo on Sunday said that Tehran clearly has tipped its hand regarding Israel.

"The Iranians have made clear they have genocidal intent," Pompeo said on a New York talk show appearance. "They want to wipe Israel off the face of the planet, and they use proxy forces — people like the Palestinian Islamic Jihad and Hamas."

Iran smuggles missiles to both groups, Oren said, noting that the weapons are directly tied to the IRGC.

"The people who made the rockets were trained by the Iranian Revolutionary Guard, usually in Damascus," Oren said.

The modern conflict between Israelis and Palestinians traces to events in the 19th century, and stems from rivalry over the Holy Land in the Middle East, a region that is important to Christians, Jews, and Muslims. The conflict centers on a number of issues, particularly territorial rights. Regional conflict between Jews and Arabs has erupted frequently since Israel was established in 1948.

Over the decades, American administrations have aimed to broker peace, to little lasting avail.

The latest outbreak erupted last month over a number of flash points, including gatherings in Jerusalem during Ramadan. The violence has taken the form of Hamas rocket attacks targeting Israeli civilians launched from the Gaza Strip answered by intense retaliation from Israel.

The increased attacks aimed at Israel result from President Joe Biden reverting to practices that did not work under President Barack Obama, according to Pompeo.

"Now the Hamas terrorists firing into Israel, I can't believe that the Biden administration is headed back to the same failed policy that they had for eight years with respect to Iran and the larger Middle East," Pompeo said.

The Obama administration paid Iran "150 billion all-in," Pompeo said, and now the Biden administration is considering paying for hostages to be released.

The policy change sends a direct message to a calculating Tehran, according to one Israeli professor who spoke to Just the News from Tel Aviv.

"Iran has gotten clear signals from Washington that its support for terrorist organizations throughout the Middle East is A-OK, and will not disturb the administration getting rid of sanctions" against Iran, law professor Avi Bell said last week on "Just the News AM."

In terms of a ground war between Israelis and Palestinians, meanwhile, Iran could reap additional benefits, Oren said.

"It makes America come down harder, perhaps, on Israel later, and Israel will be preoccupied with dealing with American pressure about Gaza and not focused on the Iran nuclear deal," he said.

An American diplomat remained in the region, hoping to de-escalate the conflict that entered its eighth day as of Monday. 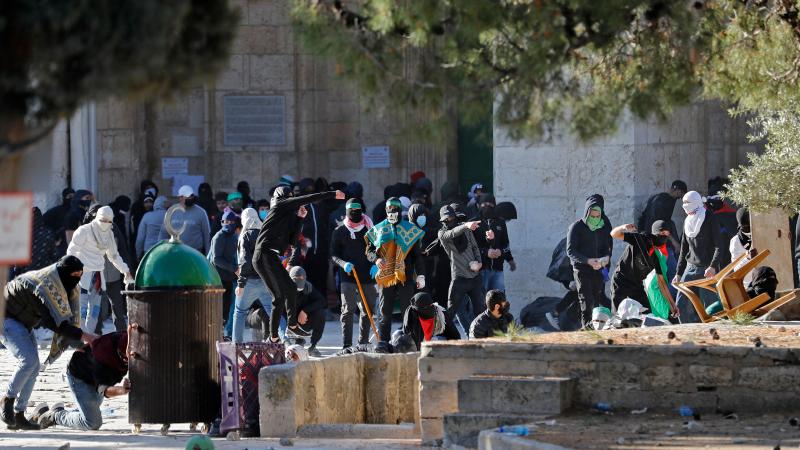