Class-action suit claims FBI exceeded its search warrant and is forcing renters of boxes to prove their innocence. 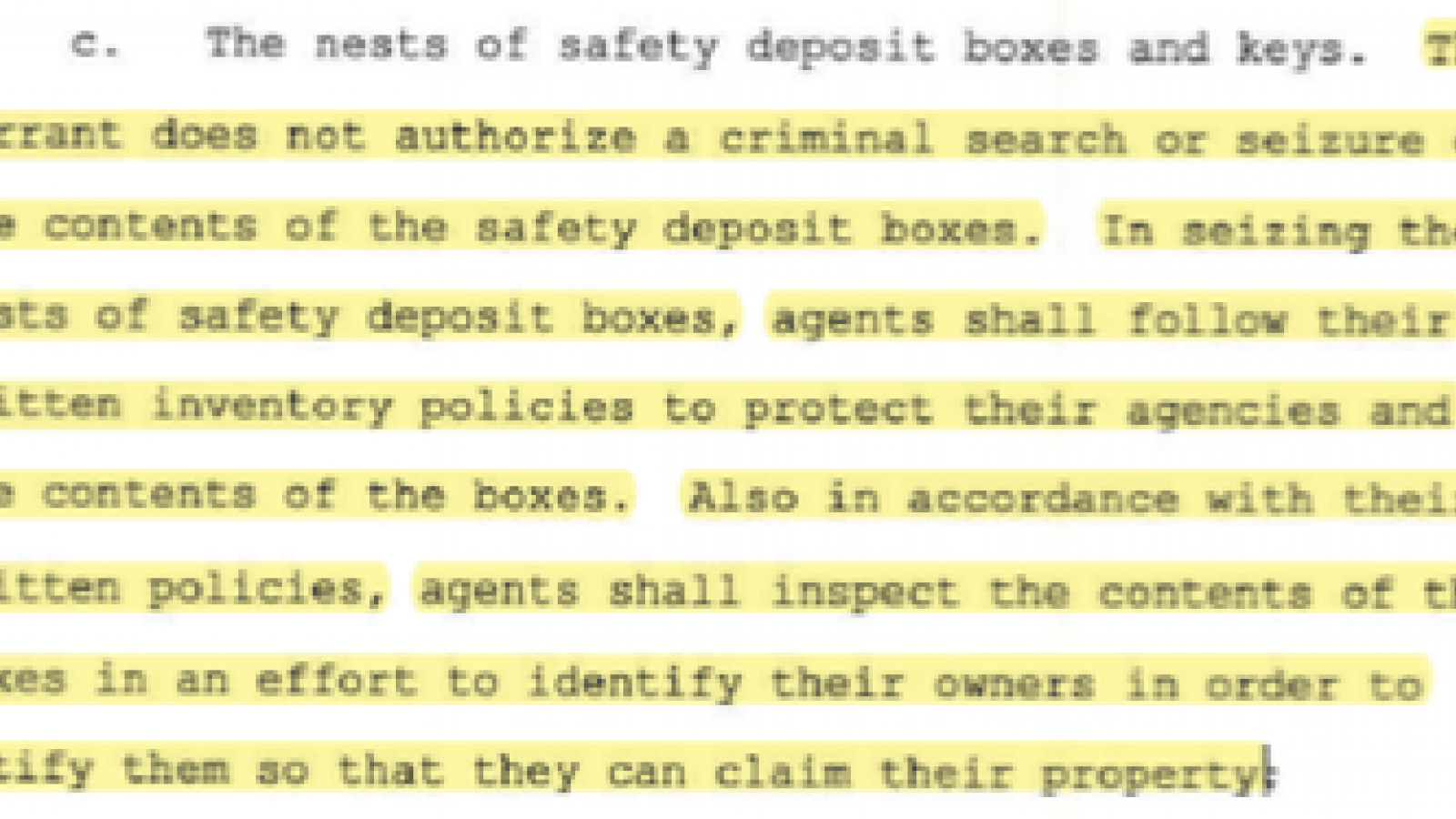 Hundreds of people storing valuables in safe deposit boxes in Los Angeles may never see their cash, precious metals and heirlooms again, unless a federal judge intervenes in the next week.

Several are suing the government for seizing the contents of about 800 boxes as part of a March raid of the storage provider, U.S. Private Vaults (USPV), which was indicted for conspiracy to sell drugs and launder money.

The Institute for Justice (IJ) is seeking class-action status for a May lawsuit by several owners alleging "shocking, unconscionable, and unconstitutional" behavior by the government. IJ attorney Robert Frommer accused the feds of an "$85 million cash grab" from people who were not accused of wrongdoing.

The civil forfeiture notices "do not identify any legal basis," namely the "specific offense," to justify each forfeiture, and thus violate due process rights, the public interest law firm said in an amended complaint filed last week. "Box holders thus do not know whether the government is accusing them of drug crimes, money laundering, structuring" or any crime at all.

"While this case is similar to many of our other forfeiture actions, it is also bigger because the government is trying to forfeit hundreds of safe deposit boxes all at one go," IJ senior attorney Rob Johnson told Just the News.

It's also unusual for the government to keep fighting "tooth and nail" after innocent people contest the forfeitures, he wrote in an email. The feds appear intent to "make all these box holders prove their own innocence to get their property back" with no evidence of a crime.

The asset list in the seizure notice discloses more than a dozen boxes containing more than $1 million each in cash, and many more in six figures. Others list jewelry, collectible coins, gold and silver, and "Precious Items" with nominal $1 figures.

The FBI appears to have exceeded the search warrant approved by the court, which prohibited snooping on the box contents except to "identify their owners in order to notify them" about claiming their property.

Video screenshots submitted in a different lawsuit show agents going through a box, tearing open packages and envelopes including coins, after clearly viewing the elderly owner's name, contact information and driver's license on the outside.

They were included in a declaration that said "items appear to be missing," and the owner's attorney told the Los Angeles Times last week the FBI inventory left out $75,000 in gold coins.

A spokesperson for the U.S. attorney's office in Los Angeles, Thom Mrozek, said everything but the coins had been returned to that owner and nothing was missing.

IJ filed a temporary restraining order (TRO) Tuesday on behalf of owners whose boxes are subject to civil forfeiture proceedings, in light of a June 24-25 government deadline to file claims. It said the feds can deny return of the items if it judges the responses are not filled out "correctly."

A motion for preliminary injunction, filed June 3 and still pending, seeks to force the feds either to provide "an explanation for its continued detention of the property" of owners who already filed claims or "give the property back." A hearing on that motion, which includes a request for "provisional class certification," is scheduled for July 12.

While the feds argued USPV intentionally sought to lure criminal activity by marketing the anonymity of its service, IJ's suit emphasizes the company's "financial security and privacy" benefits over banks. For example, owners were given the only keys to their boxes.

The FBI offered to return property to some original clients after they sued, but it has yet to return it, according to the complaint. The feds told USPV's attorneys it intends to keep $57,000 in cash from IJ's unemployed client Joseph Ruiz, which he obtained through legal settlements, but allegedly has yet to notify Ruiz of the proceeding.

The government violated the Fourth Amendment by "running any currency found [in the boxes] in front of drug-sniffing dogs," which exceeded the warrant, and failing to properly inventory the contents, the suit charged.

In addition to ignoring the letters with contact information on the boxes, the FBI "generally made copies" of the documents inside and created vague lists of the contents. Its inventory-search rationale "was just a pretext for conducting criminal searches and seizures" outside its search warrant or any "individualized probable cause."

This is the "most outrageous Fourth Amendment abuse that the Institute for Justice has ever seen," Frommer, the IJ attorney, said when it announced the case. "It is like the government breaking into every apartment in a building because the landlord was dealing drugs in the lobby."

The two agencies seized $125,000 from its clients as they passed through airports, without arresting them or filing charges, but returned the cash after they sued. A federal court nonetheless refused to dismiss the lawsuit in March, which sets a good precedent for the USPV case "even if all our named plaintiffs have their property returned," the spokesperson said.

Mrozek, the U.S. attorney's spokesperson, claimed the feds have "some basis to believe that the items" seized from owners' safe deposit boxes "are related to criminal activity." It has returned the contents of about 75 boxes and plans to give back at least another 175 with no criminal ties, he told the Times.

The government filed its opposition to the TRO late Wednesday, assailing IJ for "piecemeal filings." The civil liberties firm filed the TRO on behalf of a "different proposed subclass" while the government still had several days to respond to its motion for preliminary injunction.

IJ relied on cases that are "substantially different from those governing the seizing agency administrative forfeiture proceedings involved here," the opposition said.