President Joe Biden on Tuesday morning delivered his first speech to delegates of the United Nations General Assembly. His address covered an array of issues including the ongoing global coronavirus pandemic, climate change, and the recent U.S. withdrawal from Afghanistan.

The U.S. leader began his address by characterizing this moment as one "intermingled with great pain and extraordinary possibility," making reference to the nearly 4.5 million lives across the world that have been lost to COVID-19.

Biden said that, during his first eight months in office, he has focused on reinforcing relationships with allies of the United States so that issues impacting the world are able to be dealt with by a strong coalition of allies working toward a shared goal.

"No matter how challenging or how complex the problems we’re going to face, government by and for the people is still the best way to deliver for all of our people," said Biden, emphasizing the vitality of continued partnership between the U.S. and its Western allies.

Biden's speech comes amid heightened criticism of his administration for its handling of a number of issues including the botched withdrawal from Afghanistan, which, as the president mentioned, left 13 U.S. troops who were guarding the Kabul airport dead, in addition to, as the president did not mention, an Aug. 29 U.S. drone strike that mistakenly killed 10 innocent civilians in Afghanistan.

Biden told the delegates that he had ended "20 years of conflict in Afghanistan, and as we close this period of relentless war, we're opening a new era of relentless diplomacy. Of using the power of our development aid to invest in new ways of lifting people up around the world."

The president's appearance also occurred in the shadow of a diplomatic spat with France revolving around the a recent deal to provide Australia with nuclear-powered submarines – a deal that cost France a $66 billion deal to arm the Australians with French-built subs. Outraged by the loss and the apparent lack of transparency by the Biden administration, France recalled its ambassador, putting the Western allies Biden spoke of as being so important to the global cause in a difficult position.

Regarding COVID and the climate, Biden said he will announce additional pandemic commitments by the U.S. on Wednesday at the U.S.-hosted global COVID-19 summit. He stressed the urgency of combating climate change, saying that his administration has pledged to double international financing efforts that aim to help developing nations tackle climate change.

Thematically, Biden's roughly 35-minute speech touched on the idea that global issues are generally interrelated, and so the global community, led in many cases by the United States, has a responsibility to combat some challenges as a team. "Our security, our prosperity, and our very freedoms are interconnected in my view as never before. And so I believe we must work together as never before," he said. 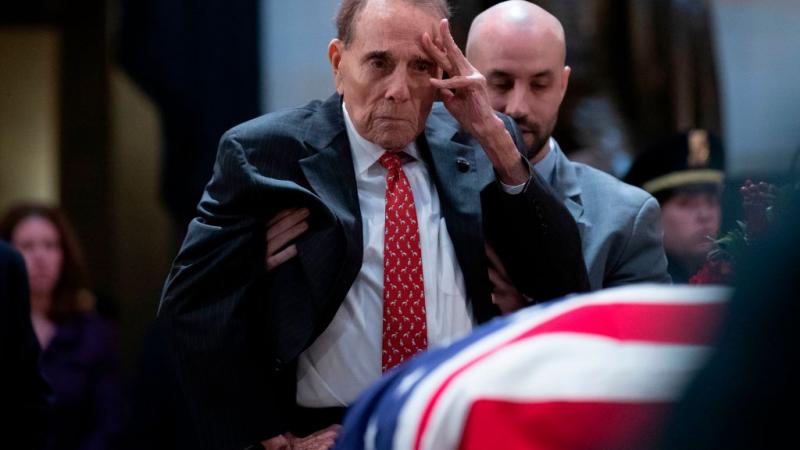 Bob Dole to lie in state at the U.S. Capitol on Thursday