The Trump legal teams starting Friday will make its case before the Senate.

The House impeachment managers on Thursday wrapped up their oral arguments on the third day of the Senate impeachment trial for former President Trump, calling on senators not to let Trump's incitement of his supporters "go unanswered."

The impeachment managers argued on Wednesday, the second day of the trial, that Trump engaged in a "months-long effort to incite" his supporters to doubt the presidential election results, leading to the Jan. 6 riot at the U.S. Capitol.

After hearing opening arguments from both sides, senators voted on Tuesday that the Senate has the constitutional authority to try a U.S. president who is no longer in office.

On Thursday, Colorado Democratic Rep. Dianna DeGette was the first to present. She played clips of rioters saying they were "fighting" for Trump. DeGette argued the protesters carried out the riot for Trump.

DeGette said the "insurrectionists" started to leave the Capitol complex after Trump tweeted a video telling them to go home.

"Trump knew exactly what he was doing in inciting the Jan. 6 mob, exactly," Raskin said. "He had just seen how easily his words and actions inspired violence in Michigan. He sent a clear message to his supporters. He encouraged planning and conspiracies to take over Capitol buildings and threaten public officials who refused to bow down to his political will. Is there any chance Donald Trump was surprised by the results of his own incitement?"

Raskin called on senators to draw the line.

"If we don't draw the line here, what's next?" he asked. "What makes you think the nightmare with Donald Trump and his lawbreaking and violent mob is over? If we let him get away with it and then it comes to your state capitol or comes back here again, what are we going to say? These prior acts of incitement cast a harsh light on Trump's obvious intent, obvious intent."

Raskin continued, saying, "Trump declared his conduct totally appropriate so if he gets back into office and it happens again, we'll have no one to blame but ourselves."

"I'm not afraid of Donald Trump running again in four years," Lieu said. "I'm afraid he's going to run again and lose because he can do this again."

Texas Democratic Rep. Joaquin Castro focused on the national security implications of the riot. Castro said some of the rioters were on the FBI's watch list. Castro said senators have a chance to send a message to the world that was watching Trump question the election results and incite his supporters.

"This trial is an opportunity to respond and to send a message back to the world," he said. "To convict Donald Trump would mean that America stands for the rule of law no matter who violates it. Let us show the world that January 6 was not America. And let us remind the world that we are truly their north star."

The Jan. 6 riot has "scared our reputation and damaged our standing in the world," Castro argued.

"The world is watching us and wondering whether our constitutional republic is going to respond the way it should," he said.

"No president, no matter the politics or the politics of their followers, conservative, liberal or anything else, no president can do what President Trump did because this is not about politics. It is about his refusal to accept the outcome of the election and his decision to incite an insurrection," he said. "There is no serious argument that the First Amendment protects that and it would be extraordinarily dangerous for the United States Senate to conclude otherwise."

Raskin said there are "legal flaws" in the First Amendment argument.

"Incitement to violent insurrection is not protected by free speech. There is no First Amendment defense to impeachment for high crimes and misdemeanors. The idea itself is absurd," he said. "The whole First Amendment smokescreen is a completely irrelevant distraction from the standard of high crimes and misdemeanors governing a president who has violated his oath of office."

Raskin added that "Trump's brazen attempt to invoke the First Amendment now won't hold up in any way" and that "this is a classic case of incitement."

Quoting the late Supreme Court Justice Antonin Scalia, Raskin said, "You can't ride with the cops but root for the robbers."

As part of the managers' closing argument, Democratic Colorado Rep. Joe Neguse said the violence on that day was "totally foreseeable."

"Was violence predictable? Was it obvious that the crowd on Jan. 6 was poised for violence and prepared for it? Absolutely," he said. "It was widely recognized of the time. In the days leading up to January 6th, there were dozens, hundreds of warnings and he knew it. He knew the rally would explode if provoked. He knew all it would take, a slight push."

As Neguse concluded his presentation, he asked senators a direct question.

"If we let it go unanswered, who’s to say it won’t happen again?" he asked.

Trump's defense team have its 16 hours to present a case about why the former president should be acquitted. 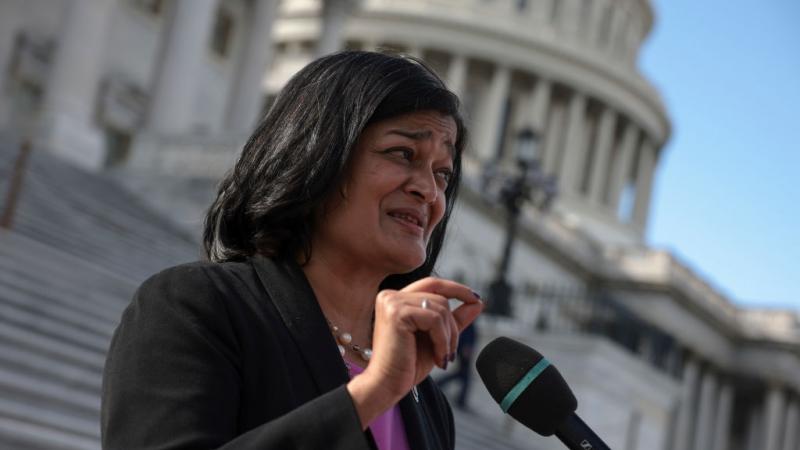 Jayapal: Half of House Progressive Caucus would vote against bipartisan infrastructure bill alone