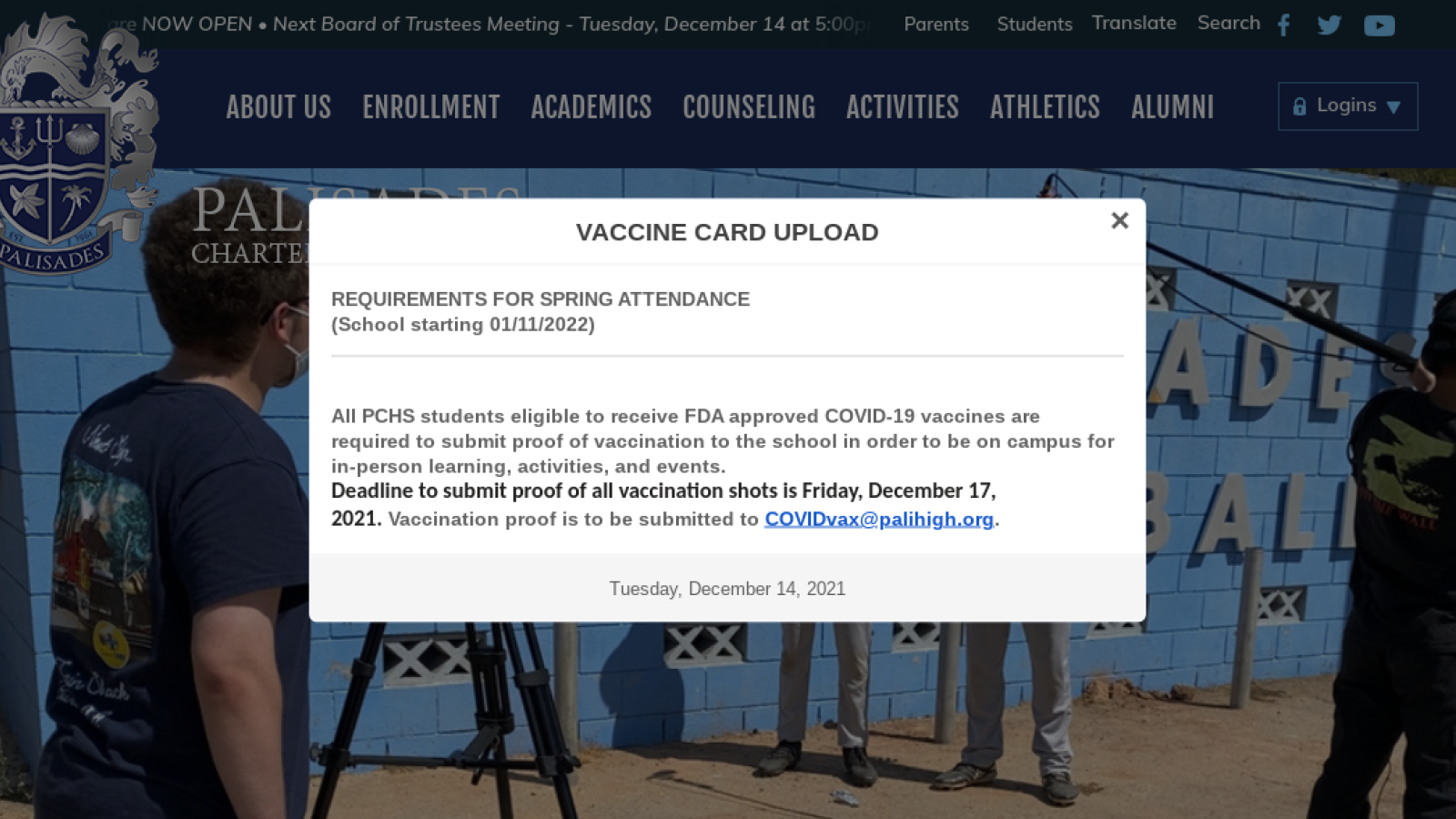 The Los Angeles charter school that graduated acclaimed director J.J. Abrams is facing litigation for pledging to ban some — but not all — children who are not fully vaccinated against COVID-19 from campus.

Parents are seeking a "writ of mandate" to stop Palisades Charter High School (PCHS), where "Carrie," "Old School" and "Modern Family" were filmed, from excluding their children from in-person learning and extracurriculars. They are represented by California nonprofit Let Them Breathe.

The school's COVID policy is modeled on that of the Los Angeles Unified School District (LAUSD), which requires vaccination of children 12 and up.

As an "independent" charter school, PCHS is not governed by LAUSD. Its policy applies to 16-and-up but will extend back to 12 once the FDA fully approves a COVID vaccine for that age group.

The PCHS policy is riddled with arbitrary exemptions for "students who are migrants, homeless, in foster care, or from military families," as well as special education students, according to the Dec. 10 lawsuit filed in Los Angeles County Superior Court.

While medical exemptions are recognized, "religious or personal belief exemptions" are not. All such non-exempt students will be "encouraged" to enroll in the school's virtual program.

The mandate has no expiration date, meaning PCHS will exceed its authority if California doesn't add COVID to the statutory list of required immunizations for schoolchildren. Exclusion also violates the charter's bill of rights, which promises "the right to equal participation in the life of the school community."

Under the state constitution, any infringement of the right to equal access to education must meet the legal elements of strict scrutiny: compelling interest, "necessary to further that interest," and narrowly drawn to achieve the interest.

"Experience and science have demonstrated that schools do not drive community transmission of the virus and that schools can reopen safely with basic precautions that are much less harmful to students," the suit argues.

Given its failure to recognize natural immunity or breakthrough infections, and "preferential treatment" for some unvaccinated students, the mandate can't even meet "rational basis scrutiny" — the level of judicial review cited to uphold some vaccine mandates.

The school appears to have changed the compliance deadline at least twice this fall. An Oct. 30 message to the community by Principal Pam Magee, shared with Just the News by Let Them Breathe founder Sharon McKeeman, gave a Dec. 17 deadline to receive the "final dose" of a vaccine.

The lawsuit, though, claims the deadline is Dec. 27. McKeeman cited a Dec. 9 PCHS email that gave parents one day to confirm their students will have received both Pfizer vaccine doses by Dec. 27.

That deadline has now been moved back to Dec. 17, according to a pop-up on the PCHS website dated Dec. 14 — four days after the suit was filed. Magee didn't respond to a request for comment.

The uncertainty around the deadline shows "why schools should not be able to mandate outside of statewide mandates," McKeeman wrote in an email. Her group is hearing especially from families that don't speak English well, because they can't make heads or tails of the shifting directives.

On Tuesday, Dec. 14 the LAUSD board voted to postpone the deadline for vaccination until fall 2022, citing 28,000 students not in compliance, the Los Angeles Times reported.

On Monday, a Los Angeles Superior Court judge had denied a preliminary injunction against LAUSD sought by two other parent groups, finding off-campus learning was better than the risk of COVID spread in school, City News Service reported.

The Times reported last week that about 34,000 students hadn't complied with the mandate, and those who hadn't yet received their first shot could not be considered fully vaccinated by next semester.

The district's virtual independent study program, City of Angels, was already struggling to serve just 16,000 students this fall, with many children missing days or sometimes weeks of instruction, according to the Times.

"The situation with LAUSD has highlighted the many forms of chaos caused by school districts going outside of the bounds the state has set and mandating vaccines on their own," McKeeman said.

The state's reimposed indoor mask mandate "will bring even more adults alongside our mission to free everyone to share their smiles," she predicted.

The charter lawsuit is only the latest from Let Them Breathe against California officials and schools, and more are on the way. It just sent a legal warning letter to the Sweetwater Union High School District in response to its vaccine mandate, McKeeman said.

Its lawsuit against Gov. Gavin Newsom and several agency chiefs to end the mask mandate on schoolchildren has stalled because the state "was able to hide behind [Newsom's] emergency order," McKeeman said.

Her group got a minor victory, establishing that state guidance can't force students into distance learning, and it's now working with school leadership to "implement enforcement measures that do not exclude kids from their education."

A hearing on the group's request for reconsideration is set for Jan. 28. Let Them Breathe argues the California Department of Health "would need to proceed through the administrative lawmaking process in order to issue a valid mask requirement for schools," since Newsom's extended emergency proclamation didn't apply to schools, McKeeman said.

Her group also filed suit in October against the San Diego Unified School District (SDUSD) for its vaccine mandate with the same exemptions as PCHS's. Both suits emphasize that employees but not students are eligible for religious exemptions.

The nonprofit failed to get an injunction against the SDUSD mandate because the district told the San Diego County Superior Court it won't exclude students before Jan. 24. Oral argument on the petition for writ of mandate is Dec. 20.

"If we win there, that will end the mandate permanently," McKeeman said. It's clear that "school districts do not have authority to arbitrarily mandate vaccines and that personal belief exemptions are protected under state law."