In January, the TSA began implementing President Biden's mask mandate in airports and extended it through Sept. 13, 2021.

Darby LaJoye, senior official performing the duties of the Transportation Security Administration's administrator, told Just the News that TSA agents are handling mask mandate violations in airports the "same way" they would travelers trying to take firearms or other prohibited items through security checkpoints.

Firearms are among the list of prohibited items in carry-on luggage.

In January, the TSA began implementing President Biden's mask mandate in airports and extended it through Sept. 13, 2021 for all individuals regardless of vaccination status.

"We've got thousands of inspectors, so you know, as a normal part of what we do, we don't only just screen people at checkpoints, but we also have compliance inspectors who enforce a variety of federal regulations throughout the transportation system," LaJoye said following a news conference with Homeland Security Secretary Alejandro Mayorkas about aviation security during summer travel. "So being able to respond to incidents at an airport is not something that's new to us.

"We've talked very broadly about the number of firearms and prohibited items, we approach it the same way. If what begins as a simple reminder for someone to wear a mask escalates to a security incident, or an assault on a TSA employee or member of the flight crew, each and every one of those is going to be investigated. Many result in arrest and potential civil and criminal penalties that can result in thousands of dollars in fines."

The TSA had items on display at the news conference that were confiscated from carry-on bags, including firearms, large knives and swords. 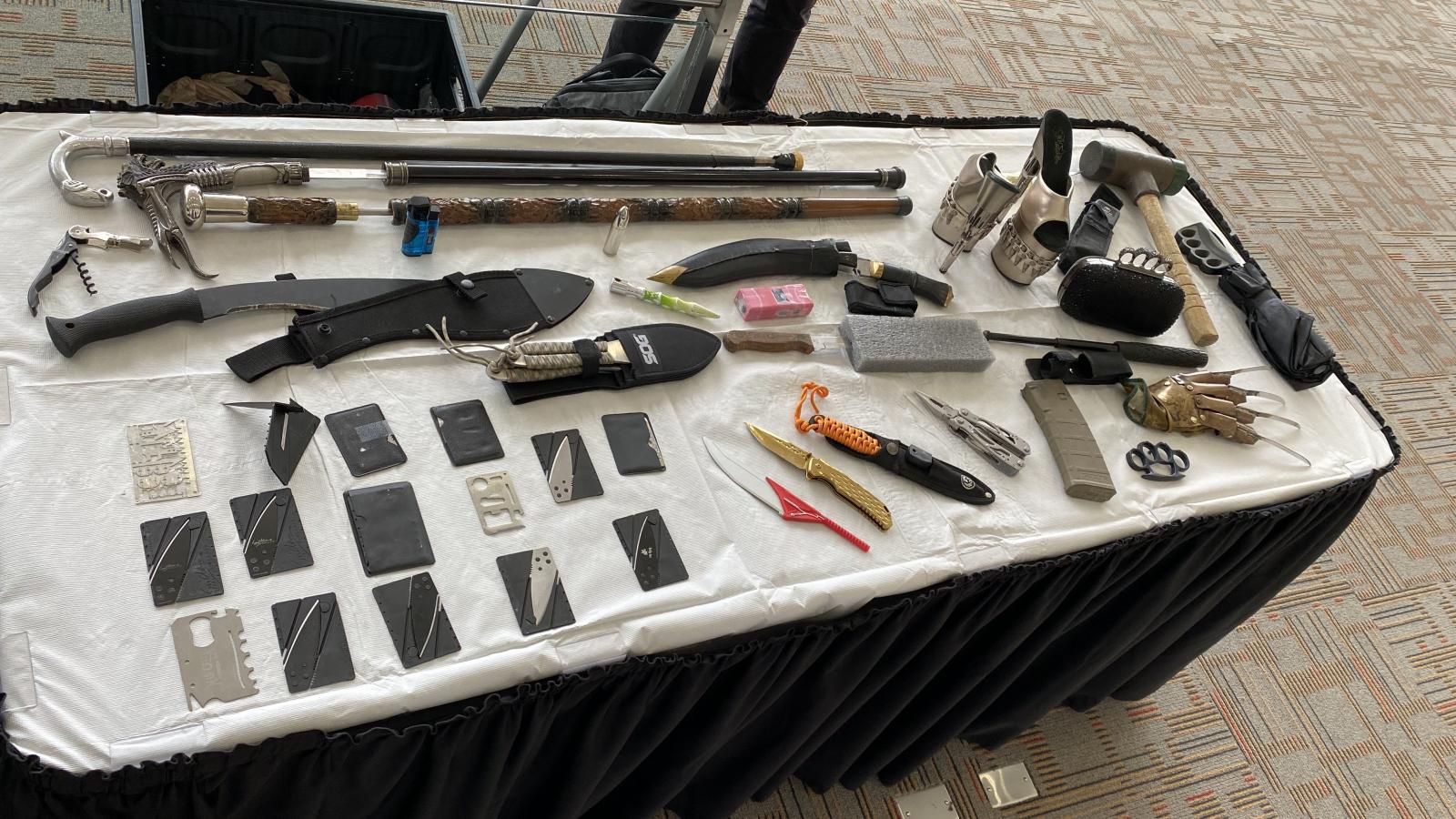 Items confiscated by TSA from carry-on luggage
Just the News

Currently, international travelers arriving in the U.S. are required to show a recent negative COVID test to board a plane. LaJoye was asked if he thinks the U.S. should require travelers to provide proof of vaccination before they are able to board an aircraft.

"The message from the federal government has been pretty clear in encouraging everyone to go get vaccinated, but just to alleviate any potential confusion, it is a federal mask mandate irrespective of one's vaccination status, or state or local ordinances," he said. "It is a federal requirement to wear a mask on all forms of public transportation."

When asked what the maximum penalty is if someone doesn't comply with the mask mandate in an airport, LaJoye said, "There can be a number of aggravating factors, but an assault against obviously, you know, a member of TSA or a flight crew can be, you know, thousands of dollars of fines, depending on what the particular circumstances are, and many of those results in an arrest."

A Southwest Airlines flight attendant was recently assaulted by a passenger on a plane. The violent incident was reportedly not specifically related to the mask mandate. However, the Federal Aviation Administration said Monday that airlines have filed roughly 2,500 complaints with the agency this year about the behavior of passengers, including "1,900 reports of passengers not wearing required face masks," Reuters reported.