Players say they were made scapegoats because university was under pressure from accreditor and students for diversity failures. 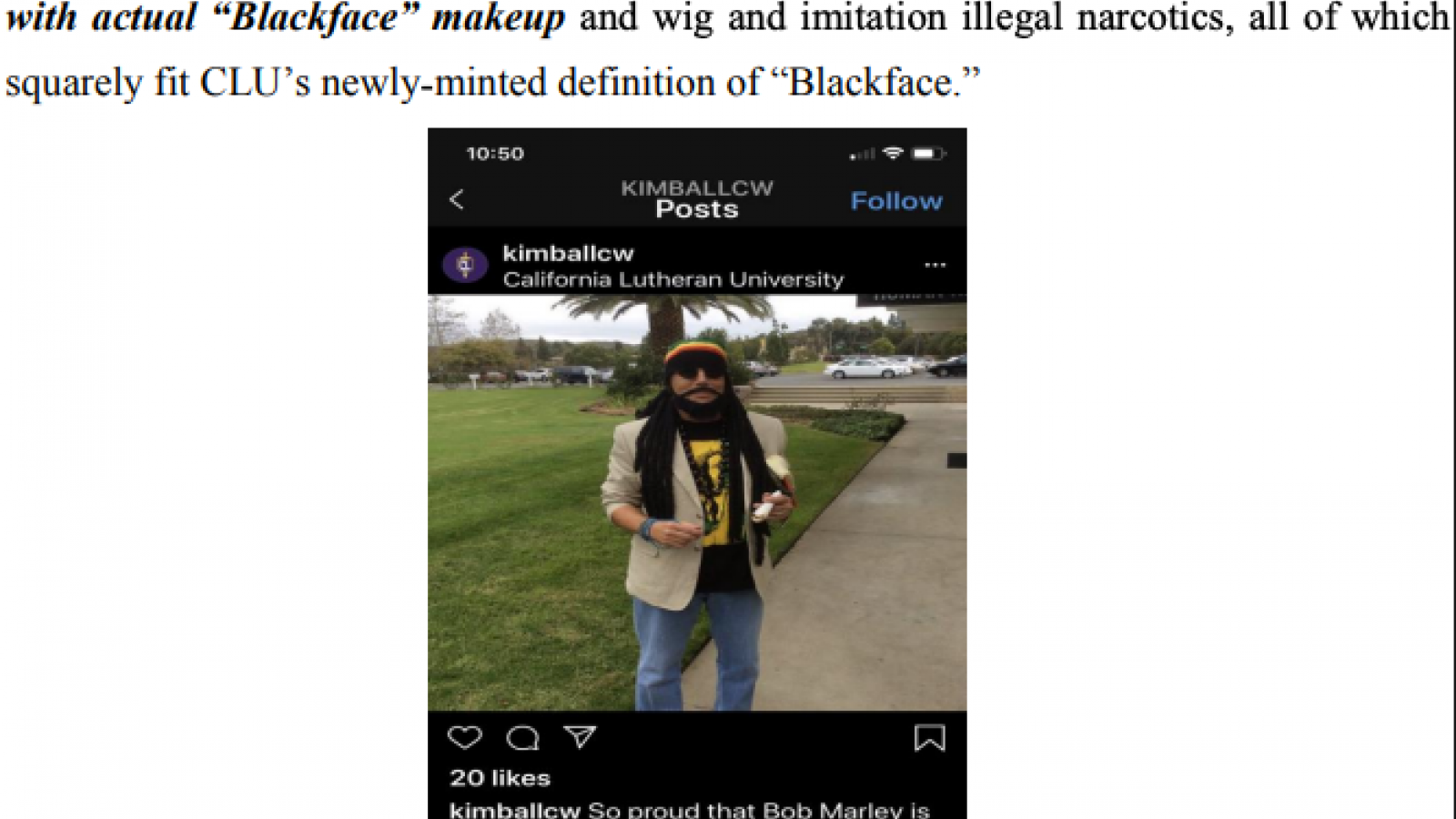 If a group of women puts on "hip-hop" clothing, applies makeup resembling "beard stubble," and performs a dance to the theme song from "The Fresh Prince of Bel-Air," does that count as "blackface"?

California Lutheran University (CLU) thought so, and told the community that those who performed the dance "will be held accountable." While the email didn't name them, it sparked interest in unmasking the culprits, and a student government official quickly identified them as the softball team.

Following media coverage that uncritically adopted the administration's characterization of the "team-bonding activity" without providing visual evidence, the players now live in fear of being forever connected with a wholly invented blackface incident, they allege in a defamation lawsuit against the Christian university.

Their coaches are also plaintiffs and, unlike the players, use their real names. Debby Day, Jason Gluckman and De Ann Young, who is black, alleged a hostile work environment in retaliation for going to bat for their players in the dance controversy and a yearlong dispute over worse treatment relative to other teams.

The baseball team has far better facilities and grounds than the softball team, the source of the lawsuit's Title IX claim, and the women's volleyball team allegedly was granted more frequent access to strength and conditioning training, a violation of NCAA rules.

President Chris Kimball had also shared an image of a CLU official in 2014 dressed as Bob Marley, in actual blackface, wig and "imitation illegal narcotics," according to an Instagram screenshot in the suit.

Kimball and Vice President of Mission and Identity Melissa Maxwell-Doherty allowed the players and coaches "to be publicly shamed and harassed" and responded with "deafening silence" when informed the young women "were in desperate need of help by mental health professionals" following the events set in motion by the administration.

The lawsuit posits that the administration made the blackface accusation to deflect criticism for its poor record on diversity issues, from both students and its accreditor, which has allegedly dinged CLU several times for not creating a racially inclusive environment.

The Western Association of Schools and Colleges (WASC) issued a "Special Visit Institutional Report" in December 2019. The softball team performance was in January 2020.

CLU notified the campus of a blackface incident the following month, shortly after it dismissed Coach Day's allegations of disparate team treatment and retaliation against her for filing HR complaints. (Coaches Young and Gluckman are seeking other employment due to "constructive termination.")

How to characterize the accreditor's proceeding is hotly disputed between the plaintiffs and the university. While it didn't respond to Just the News, the administration told The Chronicle of Higher Education that it has never been "under investigation" by WASC, in the wording of the lawsuit.

WASC said its special visit was preplanned for the halfway point of CLU's renewed accreditation in 2015. The accreditor termed it a "review" that resulted in a March "notice of concern," which means the university is "in danger" of being found out of compliance.

One of those concerns related to CLU's federal designation as an "Hispanic-serving institution" in 2016. The accreditor said it was not "authentically" serving Hispanic students. Another was about retention problems for nonwhite faculty.

This is a matter of semantics, Michael Saltz, one of the lawyers for the plaintiffs, told Just the News. "We consider any official attempt of engaging in an act of fact finding to be an 'investigation,'" and this so-called review was intended "to ascertain facts regarding CLU's progress, or lack thereof, with regard to the prior letters" from the accreditor, dating back to 2007.

It's not clear how widely the Jan. 21, 2020 Instagram video was seen before the university branded the performance blackface two weeks later. Just the News couldn't find any trace of it on Instagram, Twitter, Facebook or Google.

Lawyer Saltz declined to share a screenshot of the video of the performance, citing players' safety. Asked for a version with blurred faces, he said the legal team hasn't figured out how to do that while "show[ing] there is no blackface."

The suit claims athletics director Dan Kuntz told the coaches Jan. 26 that an unidentified university staffer complained that the video was blackface. Even though the coaches found the performance inoffensive and told Kuntz it did not include blackface, they asked the team to remove it from its Instagram page.

Following Kimball's Feb. 5 email to the community, which sparked "racially motivated harassment" against the team, the players wrote a letter to the president apologizing for "act[ing] from a place of ignorance" and "the harm we have caused to many."  They asked for it to be published, but the university refused, the suit claims.

Two days later, Kimball canceled the team's road trip, put the coaches on administrative leave and ordered everyone to attend a meeting. The plaintiffs cite from a recording of that meeting, in which Kimball allegedly admits the team did not intend to act racist and was facing threats.

But the president claimed that wearing hip-hop clothing and wigs, regardless of their color, rendered the performance blackface. The parents who attended the meeting "erupt uniformly in disagreement," the suit claims, citing the recording. Kimball also admitted he didn't write the Feb. 5 email with his name on it.

The players brought a lawyer to the next meeting with Maxwell-Doherty, the vice president and campus pastor. After accusing the administration of creating a false public impression that the players were being punished, the team was informed in writing that no one would be punished.

But "not even an hour later," the university sent another campuswide email that cemented the public impression of the performance, the suit says.

The video included "exaggerated characterizations of black people and culture" using costumes and makeup, which historians "often" describe as blackface and which "many" in the community viewed as such, the email said. It also described physical threats against the team as "critiques."

When a "mob" organized by the Black Student Union "stormed" the administration building and confronted administrators, demanding the players' expulsion, Assistant Dean of Students Christine Paul falsely told them the players were being punished. This is a "potential" violation of the Family Educational Rights and Privacy Act, the suit says.

The "continued campus-wide public shaming" of the softball team continued with an "inclusion" event the team was ordered to attend featuring Shaun Harper, director of the University of Southern California's Race and Equity Center. They were ordered to sit "front and center."

Harper opened the floor to students and faculty criticizing the team and "joined in the public ridiculing" himself by claiming "only guilty people hire lawyers," the suit claims.