Meckler explains how Parler is back online and won’t be canceled again.

Parler interim CEO Mark Meckler has been instrumental in bringing the social media platform back online after it was removed from Amazon Web Services, the Google Play Store, and the Apple App Store last month.

Meckler has previous experience in the tech world through his prior legal work and founding both the Tea Party Patriots and Convention of States Project. He explained to the John Solomon Reports podcast that as a result of people being canceled online he started a project that would prevent them from being deplatformed.

"I've been thinking about, during all this cancellation, what we have to do as conservatives or libertarians or just anybody who believes in free speech to protect ourselves in an online world, because we live in a time when if people decide they're going to send the woke mob after you, you can get canceled or unpersoned," Meckler said.

“And so people like us needed a way to be safe and secure online, and that involves a project I'm working on called the Stack, which is building everything we need from cloud-hosted servers all the way to the ground. That includes email service providers, and customer resource management providers, includes banking and merchant accounts — everything you would need to survive online, so that you can't be deplatformed."

Meckler explained how he ended up working with Parler. "When Parler went down," he recalled, "I reached out to one of my friends who is one of the majority owners in Parler, just asked if I can help, started helping them to find pieces and put the pieces in place that they needed to get back online. Ultimately, that resulted, over time, in me being the interim CEO.

"And one important correction: Now, I don't really deserve any credit for getting Parler back online. There is an incredible staff there of folks ... they've been warriors, they've been working literally 18-20 hours a day for weeks to get that stuff back online, and they deserve all the credit."

Meckler expounded on the immense complexity required to build an independent system.

"There's all the mechanisms that are required to protect you from the online attacks that are taking place constantly," he explained. "There's things like the merchant banking that has to be plugged in, the ability to take credit cards for advertisers, all of this stuff — all these layers of technology had to be redone.

"And I think this is the most important part for people to understand: They had to be redundant. And you had to have multiple iterations of each provider or each technology, that way you don't have a single point of failure. And frankly, that's what I'm most proud of, of the staff and everybody involved with the outside contractors or consultants. These guys put this together in a way that I feel like we're really safe and secure for the long haul."

Parler is experiencing some issues on Apple iOS, Meckler said. "Apple hasn't been entirely cooperative with us, and we're working to get back on the App Store so that we can load a new version of the app up there and fix some of the bugginess."

"I'm hopeful" that Apple will let Parler back on the App Store, Meckler said. "I mean, certainly no guarantees, but they certainly haven't precluded the possibility. And one of the things that we've been able to demonstrate conclusively in the public sphere, you've probably seen this — Forbes did an analysis — and really, Parler had nothing to do with what happened on January 6th, that was the excuse for a political hit job."

"The majority of anything that's negative took place on Facebook was the number one, YouTube was number two, Instagram  ... So that was a hit job, and I think Apple understands that. So right now, yeah, we expect and we hope that we'll be back up with Apple shortly."

As of now, Parler is only available to current users, but will probably be allowing new accounts next week, Meckler added.

Looking ahead, Meckler said that he is most worried about people being canceled by the banking system and email service providers.

"I'm worried about our banking system," Meckler said. "Significantly more and more banks are refusing, for example, to serve gun sellers or gun manufacturers, ammunition providers, so I'm worried about the safety and security of the banking system. That includes credit card companies and those who process credit cards, they're called the merchant banking system. So all of those are a concern to me ... We talked briefly that I'm working on something called the Stack. And the Stack is intended to include all of those things."

"And I want to be clear, it's not like we're inventing this, there are some pieces we may have to build, but there are a lot of people out there that are willing to play in the space that already run these kinds of businesses. I've been in talks with some banks that I think are good, solid conservative banks that can't be cowed by the woke mob. We already have some merchant account providers that are like that, that will be plugging in. There's, for example, a big need for email service providers. There's a problem out there right now. MailChimp is censoring email — that's the biggest — Constant Contact is censoring email." 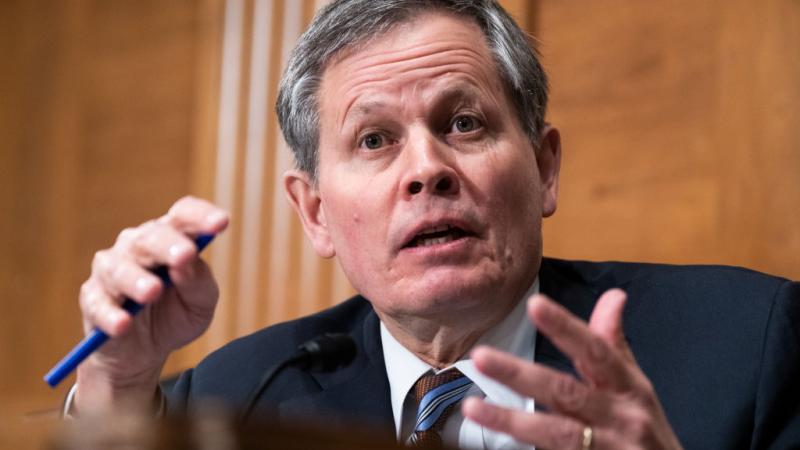