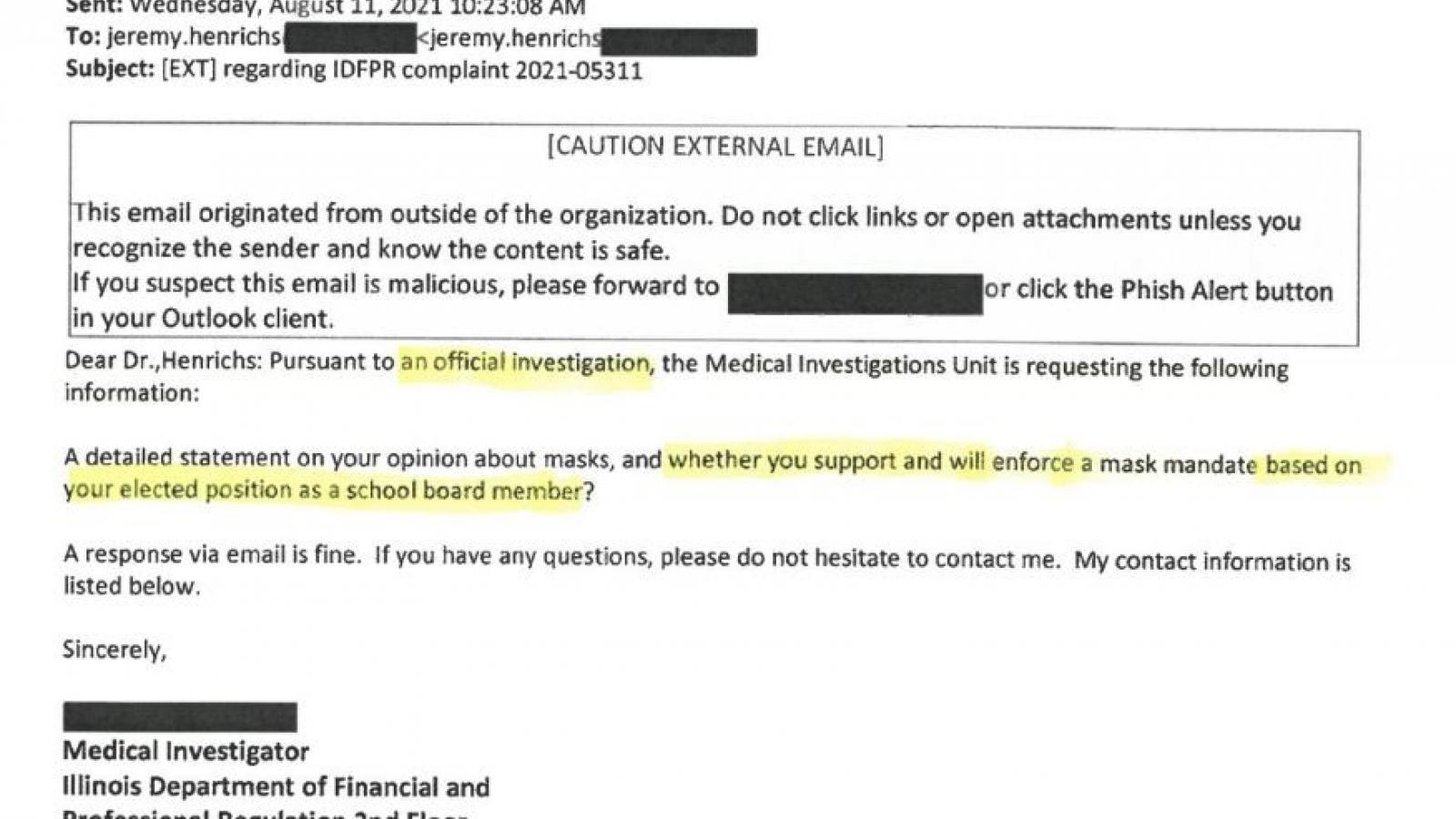 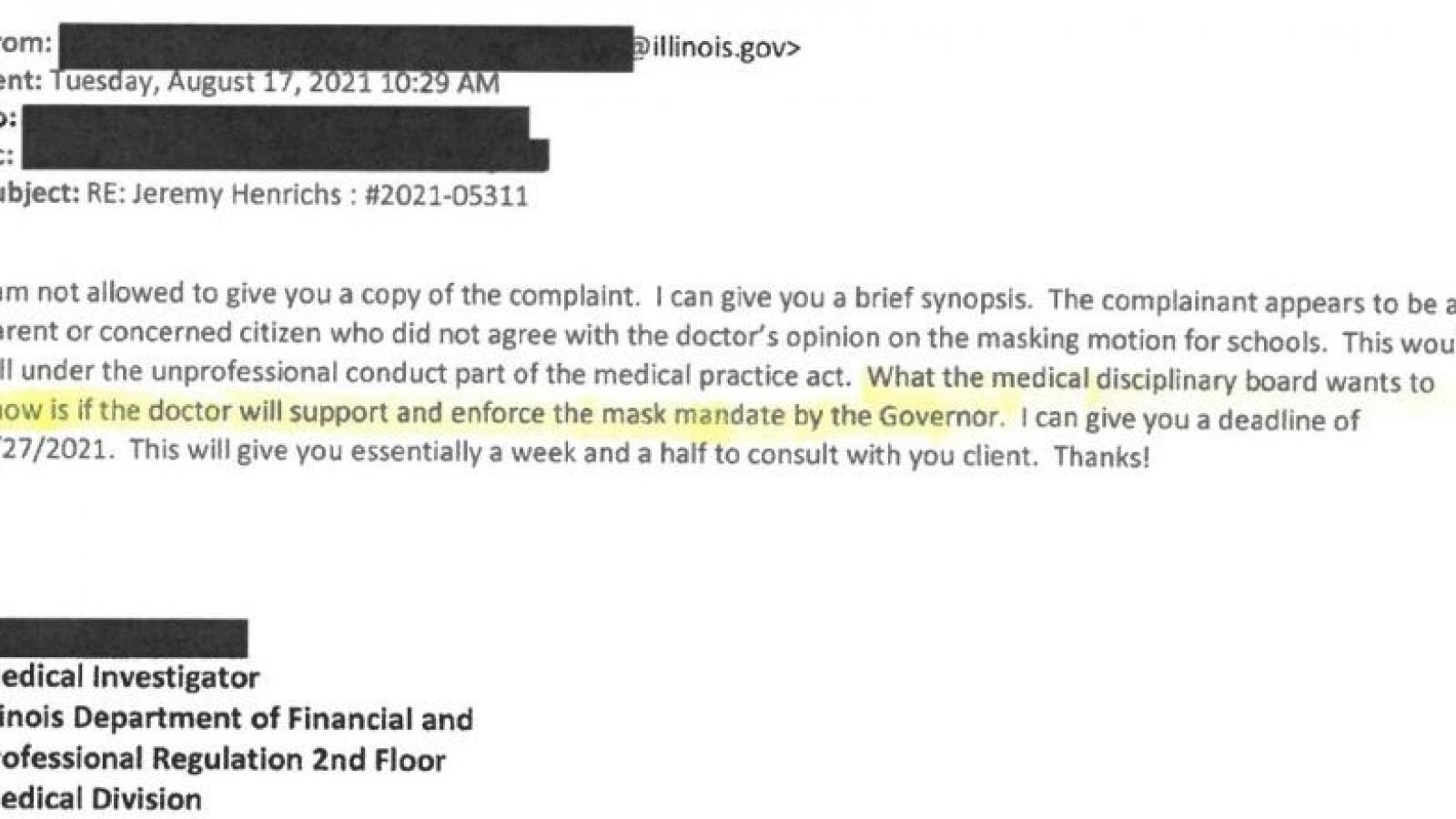 A school board member in Illinois could lose his medical license for opposing Gov. J.B. Pritzker's school mask mandate, raising concerns about the power of professional licensing regulators to chill speech on public matters.

The case of sports medicine physician Jeremy Henrichs is resonating all the way to the state capital, where a Republican lawmaker is warning Pritzker that intimidating public officials is a felony in Illinois. A fellow board member also has come to his colleague's defense.

Henrichs serves on the Mahomet-Seymour Board of Education and the faculty of the University of Illinois Carle College of Medicine. He's also team physician for the university's athletics department.

The Illinois Department of Financial and Professional Regulation (IDFPR) notified Henrichs last week that the Medical Investigations Unit is reviewing him for "unprofessional conduct" in violation of the Medical Practice Act, according to redacted emails provided by the office of Sen. Chapin Rose.

An unidentified medical investigator last week requested a "detailed statement on your opinion about masks, and whether you support and will enforce a mask mandate based on your elected position as a school board member."

An investigator told Henrichs' attorney Tuesday that a "parent or concerned citizen" apparently complained regarding "the doctor's opinion on the masking motion for schools," but declined to provide the complaint itself. It's not clear what "masking motion" refers to, as the board voted on mask-related agenda items at its July 22 and Aug. 3 meetings.

WCIA said Henrichs voted to approve a "mask-optional plan that would re-impose masks if infection rates rose too quickly" before the CDC revised its guidelines and recommended universal masking.

While school board member Ken Keefe disagrees with Henrichs on masks in school, "it is absolutely unacceptable that he would be persecuted with a state investigation," Keefe wrote in an email to Just the News.

"It will certainly have a chilling effect on any government officials who hold positions contrary to those of higher office," he said. "Dr. Henrichs is doing the best he can with the best of intentions in a thankless job," and the investigation should either be dropped or finished quickly.

Other school board members, including a fellow University of Illinois professor, didn't respond to queries about whether they consider the investigation a chilling effect on them as well, and whether it could violate state law on intimidating public officials.

Licenses threatened "unless they vote with the governor?"

While it's not clear how common speech-related investigations are under professional licensing regimes, they are well documented in graduate programs, including medicine, education and law.

The education school at the State University of New York-Geneseo suspended a student this year for saying "a woman is a woman," which allegedly violates "professional standards" and state law.

This spring a federal judge allowed a medical student's First Amendment lawsuit to proceed against the University of Virginia for removing him because he disputed the concept of microaggressions - an alleged violation of professionalism. A hearing is scheduled for next week.

Speech restrictions on lawyers in the name of stopping bias and harassment have also been considered in some states, most recently New York. A federal court blocked Pennsylvania's changes last year, finding they violate the First Amendment.

Illinois Sen. Chapin Rose filed a complaint with the Office of the Executive Inspector General (OEIG) asking for an investigation of the investigation, on the advice of the Senate GOP's ethics officer.

This "potential criminal activity … is part of a pattern of abuse of power that the Pritzker administration is undertaking to tamp out any dissent," the lawmaker said in a Thursday press release. "Who knows how many others will have their licenses threatened" in fields such as insurance, real estate and banking "unless they vote with the governor?"

Henrichs said he relied on "authoritative medical evidence" to question mask mandates in schools in Rose's statement. He warned that "the health of our democratic system is dead if we tolerate the intimidation targeting me and chilling the independence of innumerable other elected public officials."

The doctor didn't respond to queries to his university or school board email addresses. The College of Medicine didn't respond whether he's under investigation on similar grounds, or whether it considers the expression of such views protected by academic freedom.

Pritzker spokesperson Jordan Abudayyeh told WCIA the administration "has not and will not seek disciplinary action against the professional licenses of individuals who disagree with the mask mandate." She didn't respond to a query about whether the investigation is an appropriate use of the regulator's authority or could cause a chilling effect on public officials.

Rose retorted on Facebook that "official investigations" are inherently disciplinary, citing two Illinois statutes. Intimidating public officials into taking or withholding actions in their official capacity is a class 3 felony with a minimum two years in prison and up to 10. The reference to threatening public officials by putting them "in reasonable apprehension that damage will occur to property" is also a class 3 felony and may refer to Henrichs' medical license.

Henrichs is both his constituent and his doctor, Rose responded to a critic, claiming Henrichs wears masks in his medical clinic.

IDFPR spokesperson Christopher Slaby declined to provide Just the News a source on the department's authority to withhold complaints from their targets or answer whether it could be violating state law on intimidating or threatening public officials.

Complaints and investigations are confidential "unless and until a public complaint or discipline is issued by the Department," according to a statement Slaby provided. "IDFPR respects the rights of all licensees to express their personal views on important issues and to serve as elected officials."