Children self-censor or parrot their teachers' views based on intimidation backed by district policies, parents say. One withdrew from school.

A Massachusetts school district is racially segregating students and threatening to punish them for subjectively "offensive" statements they make, violating their civil and constitutional rights at both the state and federal level, according to a new lawsuit seeking permanent injunctions.

Not only does the policy violate Title VI of the Civil Rights Act, but it was applied in a discriminatory fashion, the D.C.-area group alleged. The district refused requests from parents to create an affinity group for Jewish students, who are also "historically marginalized," following "public acts of antisemitic violence and discrimination."

The suit also seeks to block a "biased incidents" policy that lets anyone anonymously report students to school authorities for "conscious or unconscious bias" against a protected class that "has an impact but may not involve criminal action."

The district requires all employees to take mandatory training on how to recognize biased incidents and "microaggressions" and then report them.

Examples include using the words "normal" or "regular" because they convey "hegemony" and the description of Native American tribes at America's founding as "roaming" because it "implicitly justifies the seizure" of their lands by white settlers.

The policy applies off-campus and on social media, which puts the district at odds with the Supreme Court's ruling against a Pennsylvania school district that punished a cheerleader for a profane weekend rant on Snapchat, the suit says.

Wellesley High School principal Jamie Chisum notified parents this fall the school had "moved forward with consequences" for a student who made anonymous posts on social media. SCOTUS banned such discipline except in limited circumstances months earlier.

Even though it refused to create a Jewish student affinity group, the district is forwarding some bias reports to the Anti-Defamation League (ADL), which fights anti-Semitism.

"Nearly seven decades of Supreme Court precedent" confirm public schools can't segregate students by race and that "students do not abandon their First Amendment rights at the schoolhouse gate," the suit says.

The group is representing five unnamed members who are parents of current and former students in the district who were subject to the challenged policies and practices.

District spokesperson Stephanie Hawkinson declined to comment on the litigation, according to the Boston Globe. She didn't respond to Just the News queries, including why the district punished a student for off-campus social media posts months after the SCOTUS ruling.

Though they are more established on college campuses than in K-12 school districts, policies and practices in both venues have been challenged in federal civil rights complaints and litigation.

Parents Defending Education president Nicole Neily previously litigated against campus speech codes as founder of Speech First, with a mixed record of getting public universities to scrap or at least neuter their bias response teams and related speech restrictions.

The affinity groups in Wellesley Public Schools are explicitly exclusionary, promising that identity groups organized by race and ethnicity will give members the opportunity to share their experiences "without another group's voices." The district has also pledged to expand the program to the "parent/caregiver community."

DEI director Charmaine Curry asked school leaders and teachers to share the school's first affinity group event only with "Black and Brown students" and then a subsequent event only with students of Asian descent. She couldn't do it herself because Curry didn't have emails "disaggregated by demographic data to really hone in," she told a teacher.

When the Asian event was remade into a "healing space" following the Atlanta massage parlor shootings that killed mostly Asians, "administrators and teachers repeatedly instructed that the affinity group meeting was not for white students," the suit says.

Curry told a white teacher who received a Zoom link to the event that whites were banned, and others received similar warnings. According to the Boston Globe, "several white students did attend the event."

Administrators are also promoting the intentional exclusion of "those who have no desire to dismantle systems of oppression" and indoctrinating faculty in the ideology of "white fragility."

The district sponsored a high school presentation that said Blue Lives Matter is associated with white supremacy and "police started the violence" in summer 2020 riots following George Floyd's death, according to the suit. (Parents Defending Education previously published images from the presentation.)

It told them not to use the phrase "blue lives matter" or "all lives matter" because they are "racist direct push-back" against the Black Lives Matter (BLM) movement. Students were ordered not to share the presentation outside "the WPS community." 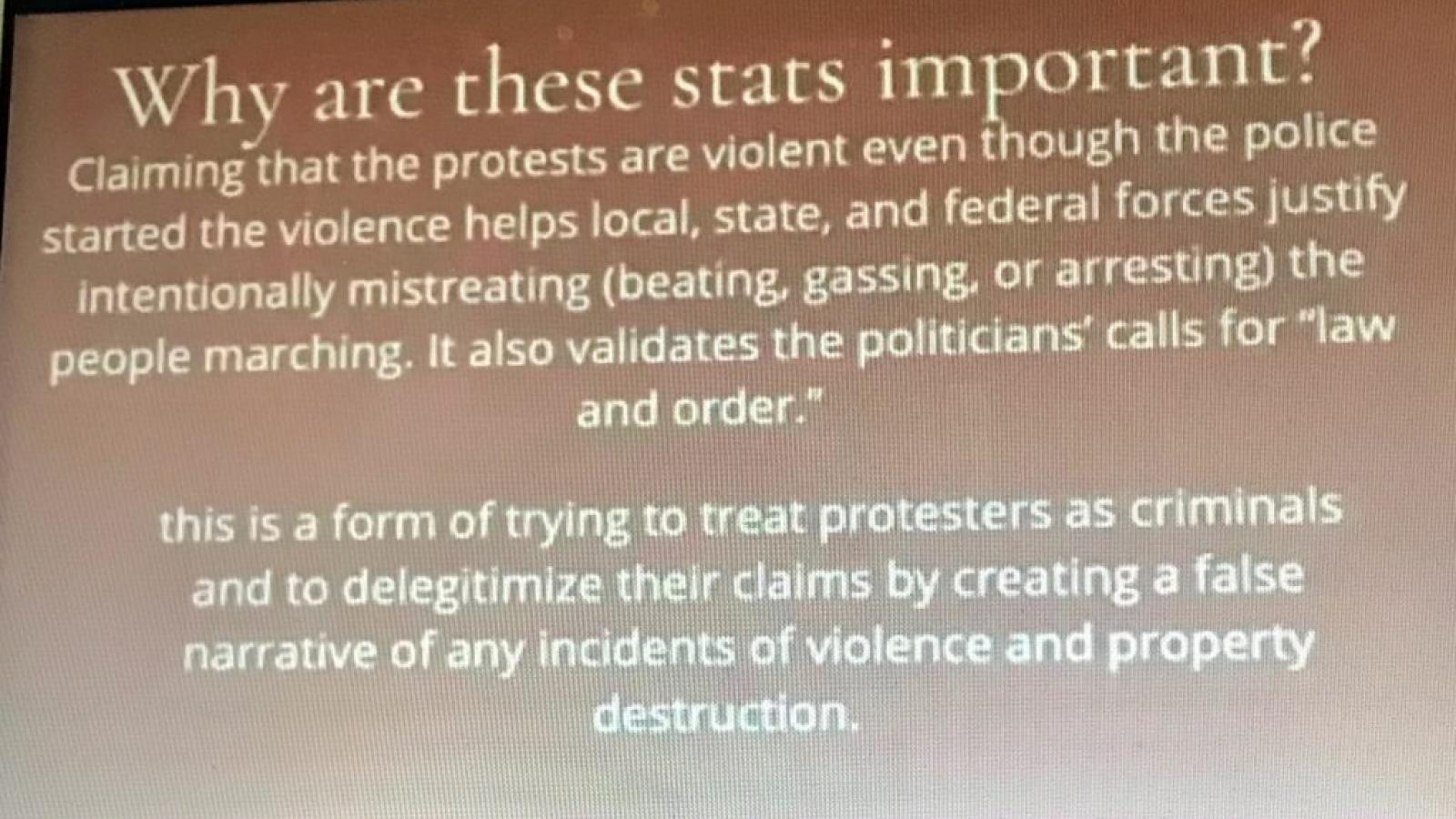 The biased incidents policy will lead to the same "surveillance state" created by bias response teams on campus, chilling speech and being used to shut down unpopular viewpoints, the suit says.

Two parent members of the group withdrew their younger child in the previous school year because the child stopped talking after watching classmates "repeatedly report their classmates" for sharing their political beliefs. Their older child is now self-censoring despite wanting to speak "passionately and repeatedly" during gender identity and BLM discussions in class.

Another parent's children limit their classroom participation to parroting their teachers' views for fear of being reported and harming their college prospects, based on previous incidents. One was "physically assaulted" by students who discovered the parent had voted for Donald Trump, which a guidance counselor allegedly brushed off because the assailants were minorities.

Administrators have also "intimidated students who chose not to participate" in popular causes and banned students and parents from presenting competing viewpoints. The suit alleges that when the district started flying the BLM flag outside schools, it rejected requests from parents to fly the Thin Blue Line and Israeli flags alongside.

The intake form to report biased incidents offers 15 protected categories, including "Other," and categories for speech in class, in person, on the internet, email or text, and phone or voicemail. A designated official at each school "promptly" reviews reports and sends some along to the ADL and town police "when relevant."

Consequences for bias include formal discipline for the perpetrator, "supportive actions" for those impacted, and education steps for "potentially the school community to ensure that similar events do not happen in the future."